Anthony Joshua's world title fight with Kubrat Pulev could be heading to the "frontrunner" venue of the Principality Stadium in Cardiff, says promoter Eddie Hearn.

The WBA 'super' and IBF heavyweight champion has switched his attention to the IBF's mandatory challenger Pulev after Wladimir Klitschko announced his retirement instead of accepting a planned rematch in Las Vegas.

Hearn has suggested that Joshua's title defence could now be staged on British soil, with the 74,500 seated stadium in Wales leading the list of locations on a possible date of October 28.

"Yeah we know it's going to be Kubrat Pulev," Hearn told Sky Sports News. "Obviously there was an order made some time ago now by the IBF which we had to be a part of and sign.

"If it wasn't Klitschko, then it was going to be Kubrat Pulev, who is the No 1 challenger with the IBF. He's been AJ's mandatory for probably 12 months now, so he's due his shot. 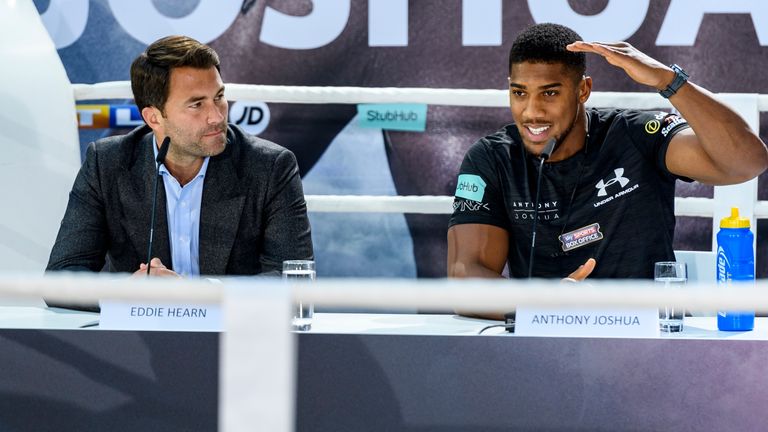 Probably at the end of next week, we will make that decision. Probably right now, October 28th at the Millennium Stadium is a frontrunner.

"Probably at the end of next week, we will make that decision. Probably right now, October 28th at the Millennium Stadium is a frontrunner. But again, plenty to do, juggling the belts."

Unbeaten Cuban Luis Ortiz could be next in line for Joshua after he was ordered to fulfil another title defence by the WBA and Hearn is hopeful that a unification clash with Deontay Wilder can take place in the summer of 2018.

"Luis Ortiz, the WBA have just called a mandatory on AJ for him," said Hearn. "We're going to have to fight Luis Ortiz after Kubrat Pulev. Deontay Wilder wants to fight, so we're mapping things out nicely.

'Pulev next for AJ, not Wilder'

"In an ideal world right now, we're looking at Pulev, Ortiz, and then Deontay Wilder next summer. Things are looking good, although the Klitschko retirement was a little bit disappointing for fight fans, we know that AJ has got a long career ahead of him.

"We've got to map it out effectively. He's just having his last little bit of time in the sun right now and then camp starts next week."