Joseph Parker has placed his first offer on the table to fight Anthony Joshua, his promoter has claimed.

Parker's promoter David Higgins responded to Joshua's tweet on Thursday, exclusively telling Sky Sports: "Joshua is accurate - so I will make an offer. I will underwrite and promote the fight anywhere in the world to give Joshua 60 per cent profit.

"The starting point is 50-50. But as a mark of respect, we would accept a bit less. But we will not accept an insult. Why should we?"

"We're in talks, 100 per cent," Higgins said. "Joseph wants the fight but the deal has to be fair and reasonable. If they treat it like a regular voluntary, that devalues it.

"We're not selling our belt. We are going to take Joshua's belts, and we will be paid for our time.

"A proper undisputed world champion has not been done since Lennox Lewis, and if Joshua fought Parker it would a step [in that direction]. So it's not a regular voluntary [defence for Joshua]."

Joshua's promoter Eddie Hearn told Sky Sports News: "The Parker deal is a tough deal to make. Parker isn't a big name and hasn't looked great but he is a world champion, and Anthony wants his belt.

"If we can't get Wilder next, we want Parker. My instructions from Joshua: 'I want to be the undisputed champion of the world by the end of 2018'. That means going through Parker and Wilder in any particular order." 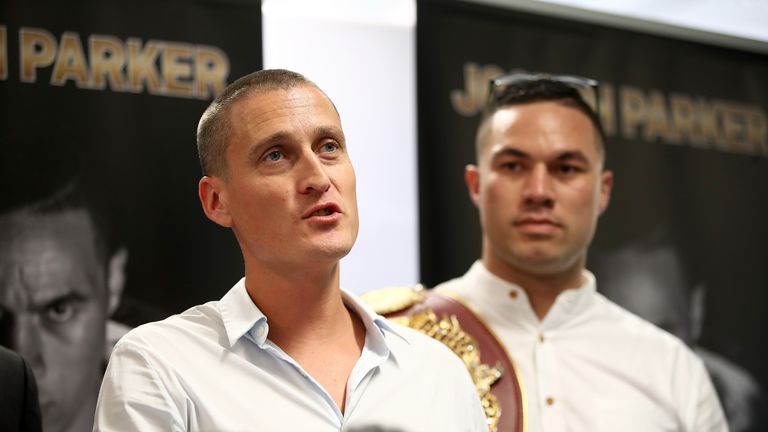 The starting point is 50-50. But as a mark of respect, we would accept a bit less.

WBC champion Wilder appears to be in pole position to secure the first world heavyweight title unification fight of 2018 against Joshua, but that outcome wouldn't faze Parker.

"We don't care. If Joshua fights Wilder, someone will win and take three belts. Then we will get our shot and it's even bigger," Higgins said.

"We'll take the fight but we're not desperate. If Joshua fights Wilder, we'll fight the winner.

"They will choose between Wilder and Parker. We're here, we're ready."

Parker has "an agreement in principle" to fight Lucas Browne next, but would be content to travel to the UK if a deal can be struck with Joshua.

"For us, March of April [would be suitable] depending on if it's indoors or outdoors," Higgins said. "If I was the promoter I'd look at Wembley or [the Principality Stadium in Cardiff]. The UK is the centre of heavyweight boxing today.

"Eddie Hearn is very straightforward. He wants to make big fights happen. Despite the banter, the guy genuinely wants to unify [the world titles]. We have respect for them."

Earlier this week, talks were revealed to have quickly broken down to pit Parker against Wilder.

"Wilder's crew put a figure on the table that wasn't enough," Higgins said at a press conference. "If they put the right money on the table we would go to America and fight Wilder."

Parker added: "I want to fight Joshua. He has got two belts and I want to test his chin and put on a great show.

"Those [other] fights would be good to keep busy, but the ultimate fight is to fight Joshua. He is the preferred option for us."

Watch Jarrell Miller against Marius Wach on a New York bill that also includes Daniel Jacobs versus Luis Arias, along with Conor Benn's US debut from 3am this Sunday, live on Sky Sports Action and Sky Sports Main Event.