Watch Canelo-Fielding from 11pm on Saturday, live on Sky Sports

Amir Khan has labelled Saul Alvarez a "beast" and, having shared the ring with the Mexican superstar, does not believe anyone can stop him.

Khan was brutally halted in the sixth round when he jumped up in weight to take on the pound-for-pound star in May, 2016 at The T-Mobile Arena, Las Vegas.

Rocky Fielding is now the latest in a long line of five Brits to take on 'Canelo' as he graces Madison Square Garden this Saturday night, live on Sky Sports, defending his WBA 'super-middleweight world title.

Khan is giving his compatriot full support, but is well aware of the daunting task that lies ahead. 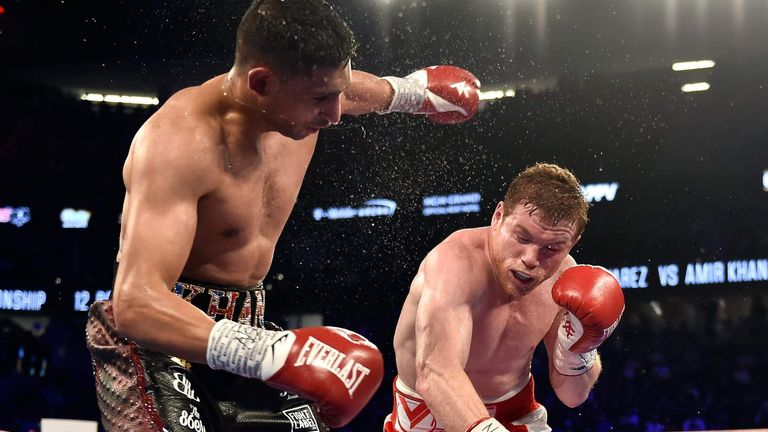 Canelo is a beast. He has matured as a fighter and is a better fighter than when I fought him. He is a great fighter now.

"I like Rocky, he's a brilliant guy but I've been in with Canelo and I just can't give Rocky a chance," said the Bolton welterweight.

"Canelo is a beast. The way he beat Triple G, I just think no-one can stop him.

"Even if Mayweather came back and took a rematch with him, I think he would beat Mayweather."

Khan boxed well and was up on two scorecards when he battled the 28-year old Mexican, but was ultimately sized up and made to eat a stunning overhand right that finished proceedings in an instant.

"Canelo has matured as a fighter and is a better fighter than when I fought him," said Khan. "He is a great fighter now.

"I am a mobile fighter so it obviously suited me but eventually he found his range and caught me with a good shot.

"He was working out how to stop me and break me down, and obviously I was beating him on points, but maybe he was just waiting for that one big shot.

"He might not do the same up at super-middleweight and I hope Rocky can do it, I really do, but I just can't see how."