Kid Galahad has urged Josh Warrington to accept a British battle after the Sheffield fighter was confirmed as mandatory challenger for the IBF champion.

Warrington successfully defended his IBF featherweight belt with a unanimous decision win over Carl Frampton in December, and the IBF has since indicated it will enforce a title defence against Galahad, who defeated Toka Kahn Clary on points in an IBF final eliminator in October.

The unbeaten Galahad stayed busy with another comfortable decision win last month as he awaits news on a fight against the Leeds-based champion.

"Some people might be happier waiting and taking a vacant-title route, but I'm in this game to leave a legacy," Galahad told Sky Sports.

"I've been very patient and always wanted to mix it with the big names and prove myself as belonging at the top table.

"Hopefully Josh gives the fans what they want now and let's have an all-British showdown, a Yorkshire derby. It would be a great build-up and then a great main event too."

Warrington produced a career-best victory over Frampton, troubling the Belfast man with a ferocious early onslaught before closing out victory on the scorecards at Manchester Arena.

Having predicted a Warrington win, Galahad was not surprised by his performance, but has warned the champion to expect a vastly-different fight when they share the ring.

"It was a convincing display. It played out the way I thought it would to be honest," said Galahad.

"If you watch my interviews when I was asked about that fight, I told everyone Warrington would win it. 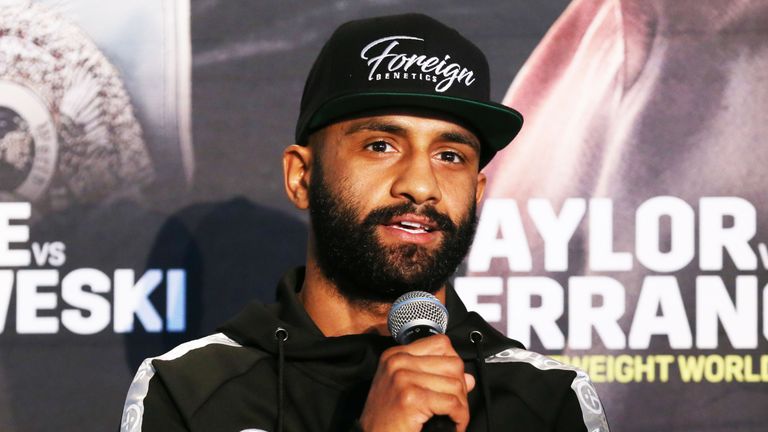 I'm a very different fighter to Carl. Stylistically first and foremost but also size, power at the weight class and my fitness and engine.

"Josh is a lot better a boxer than people have previously given him credit for. That said, Frampton was a brilliant bantamweight, not sure he is the same level of fighter at featherweight.

"The timing was right for Josh in that bout, but he wouldn't enjoy the same level of success versus me.

"Warrington would definitely have a different fight against me. I'm a very different fighter to Carl. Stylistically first and foremost but also size, power at the weight class and my fitness and engine."

Galahad expects a showdown with Warrington to be staged in their home county and joked that he is even willing to fight in his local rival's hometown.

"It's a Yorkshire derby so I guess for the fans it would be great to have it in Yorkshire, but it also warrants being in a big arena so more people can enjoy the spectacle," he said.

"To be honest, it doesn't really bother me where the fight takes place, because no matter where in the world we are, that ring and squared circle is always my home.

"As for when, the sooner the better. I have faith in Eddie Hearn and Matchroom delivering that, so I'll leave that to them.

"I'd fight him in his own back garden. By the end of the contest, I'll have converted some of them Leeds fans into fans of Kid Galahad."