The heavyweight duo of Allen and Chisora are preparing for another explosive night as 'White Rhino' takes on former world champion Browne, while the Londoner is facing a must-win fight with Gashi on April 20, live on Sky Sports.

I'm unbeaten at The O2 with two huge knockouts and I'm very confident in making it a treble.

"I have never trained so hard in my life," said Allen. "I'm going to knock Browne spark out, I hit too hard for him. Even though there's no animosity in the build-up, I want to punch him all over The O2 into row Z.

"Lucas Browne isn't the Lucas Browne who beat Chagaev, he's a faded force. That being said he's still very dangerous, he does have that power, but this fight is perfect for me.

"He's a former world heavyweight champion. A win here puts me on the big stage, not the highest level, but within touching distance of a fight that would then put me there. 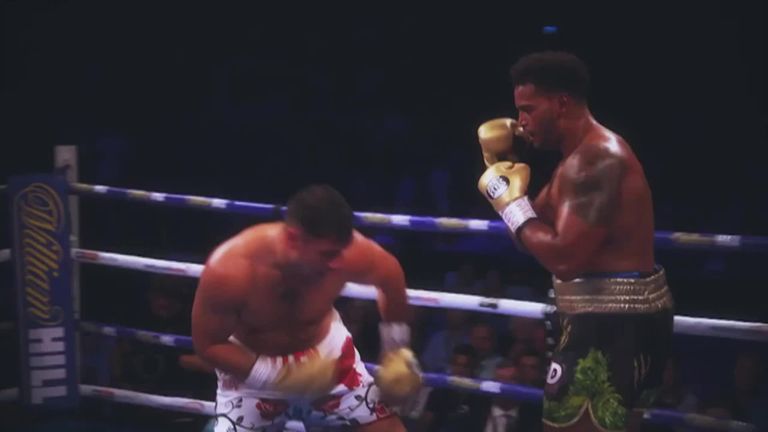 Josh Kelly, Dave Allen and Derek Chisora are just three of an exciting line-up that will be in action at the 02 Arena on April 20th live on Sky Sports

"I'm unbeaten at The O2 with two huge knockouts and I'm very confident in making it a treble."

Browne has come back with three wins since his knockout loss to Dillian Whyte last March, and intends to inflict an explosive defeat on his popular British opponent.

It's a blockbuster fight and I know Dave is a big crowd favourite but that will drive me on to silence the fans.

"I'm eager to redeem myself at The O2 and will be coming for a knockout," said Browne. "I'm a fan of Dave, I have nothing bad to say about him and I'm looking forward to a good old-fashioned brawl on April 20.

"This is the fight for me to showcase who and what I am to the masses. It's a blockbuster fight and I know Dave is a big crowd favourite but that will drive me on to silence the fans.

"I'm at the stage in my career where I need to be 100 per cent serious, I'm getting too old to play around. The loss to Whyte was the kick in the butt that I needed and since then I've changed my promoter, team, training and general approach to boxing."

Chisora had been holding talks for a fight against Joseph Parker, but vowed to produce a destructive win over Gashi after recently teaming up with trainer David Coldwell.

"Six weeks until I go back to war and boy I can't wait," said Chisora. "I will be stepping into the ring at The O2 Arena with fire in my soul. I have a point to prove and a mission to continue.

He is coming to win but trust me, he won't hear the final bell.

"Gashi has shown he is a true fighter, he is always ready to go to war when called. He showed this in December when he stepped in the ring with Takam on just two days' notice and gave him a real fight. I'm not stupid, I know with six weeks' notice Gashi will be a different animal.

"He is a wild horse, a loose cannon. He is coming to win but trust me, he won't hear the final bell. I'm ready, we've stepped things up a gear working hard with Dave Coldwell.

"April 20th, 'WAR' Chisora will be back in London to show the heavyweight division exactly why retirement wasn't an option."

Welterweight Kelly must overcome a fellow unbeaten contender in Poland's Przemyslaw Runowski, who has racked up 17 straight victories.

This year is going to be massive if everything goes to plan.

"Runowski's a solid opponent, unbeaten for a reason," said Kelly. "They breed them tough in Eastern Europe but I'm ready to dismantle him and put on a show for everyone in the crowd and watching at home. It excites me every time I step through the ropes.

"This year is going to be massive, if everything goes to plan. I've got to keep my feet firmly on the ground, continue to work and get the results."

"I'm excited to be back at The O2 for this big heavyweight double-header," said Eddie Hearn. "Dave Allen has become a cult hero over the last year, but this time he is in deep against former WBA world champion Lucas Browne.

For Dave, this is a dream chance to catapult himself into the big time in a vibrant heavyweight market.

"Browne who lost to Dillian Whyte at the same venue just under a year ago has bounced back with three wins since and is looking for a shot at one of the big boys. For Dave, this is a dream chance to catapult himself into the big time in a vibrant heavyweight market.

"Chisora returns after his fight of the year contender with Dillian Whyte in December against the tough Senad Gashi.

"Gashi went to war with Takam in December on less than a week's notice and this time he will be fully prepared in what I believe will be a very tough fight.