Dillian Whyte and Michael Hunter awaiting a decision from Alexander Povektin, with promoter Eddie Hearn hoping to arrange fights for the heavyweight trio.

The Russian had previously been named as a potential opponent for Oleksandr Usyk's expected debut in the top division in Chicago on May 18, but highly-ranked British contender Whyte and American Hunter are also being considered for Povetkin.

Whyte is seeking a new foe after a WBC interim title fight with Dominic Breazeale was shelved, with the Californian being named as the next challenger for WBC champion Deontay Wilder.

"The plan for Dillian Whyte right now, all the conversations are about boxing July 13 in the UK, so we have to see who," Hearn told Sky Sports.

"There's a lot happening in terms of a lot of the players right now. Is Usyk going to fight Povetkin? We're still deciding that over the next 48 hours.

"But it's really about understanding Dillian's position. He wants to become the mandatory for the WBC world title, and we're putting the pressure on the WBC to say 'what are you going to do about not providing him with the option to do that, considering you just took it away from him?'"

Hunter was initially linked with Carlos Takam, but has also lined up a potential fight with Povetkin following back-to-back wins over Martin Bakole and Alexander Ustinov.

I love it, especially because the main idea of the Usyk-Povetkin fight, and I like to throw a little wrench in plans, so I'm excited about that.

"That's the latest on me as far as fights. We're going to have an answer on Monday, and we're going to see about that. But yeah that's what I'm getting at right now, that it will be Povetkin, no longer Takam. That got took off the table.

"I love it, especially because the main idea of the Usyk-Povetkin fight, and I like to throw a little wrench in plans, so I'm excited about that." 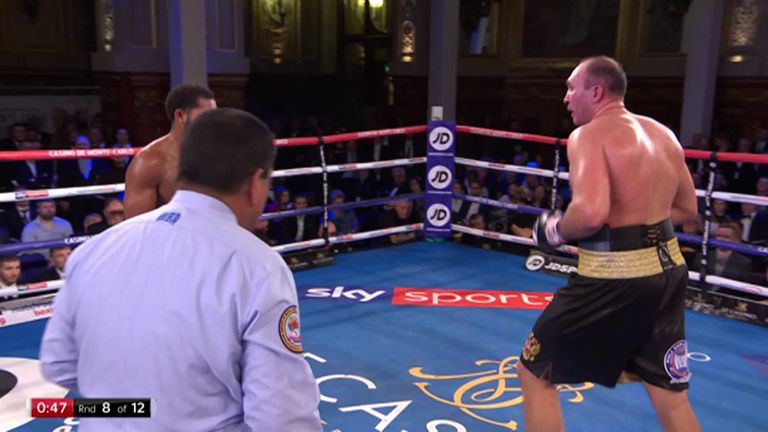 Look back at Michael Hunter's KO win over Alexander Ustinov

Povetkin remains open to a fight with Usyk and intends to work his way towards another world title fight following his defeat by unified champion Anthony Joshua at Wembley last September.

"Povetkin is interested in continuing his career and hopes to return to the ring in May or June this year," said Vadim Kornilov, a representative of World Boxing, Povetkin's promoters.

"He wants to fight the biggest possible fights, a title fight would be his preference, but is not against a fight with Usyk."

Whyte has been overlooked for the Wilder fight, despite earning a No 1 ranking with the WBC, and Hearn will seek a resolution from the governing body.

"It's very frustrating," said Hearn. "I think the WBC have to act, because what the WBC did was order Dominic Breazeale against Dillian Whyte for the interim fight, for the mandatory position with the WBC.

"After that, they actually ordered the Fury-Wilder fight, so now Fury has pulled out of the Wilder fight, Breazeale has hopped in as the new mandatory.

"Okay, well we're not over the moon with that, but you can't order a mandatory fight, or an interim fight for Dillian Whyte and then just say 'Oh sorry mate, it's not happening anymore, you have to go away,' because also he turned down fights like the Joshua fight, and other opportunities for multi-millions of pounds, because he had that opportunity to become a WBC mandatory.

"You can't just pull it away from him."