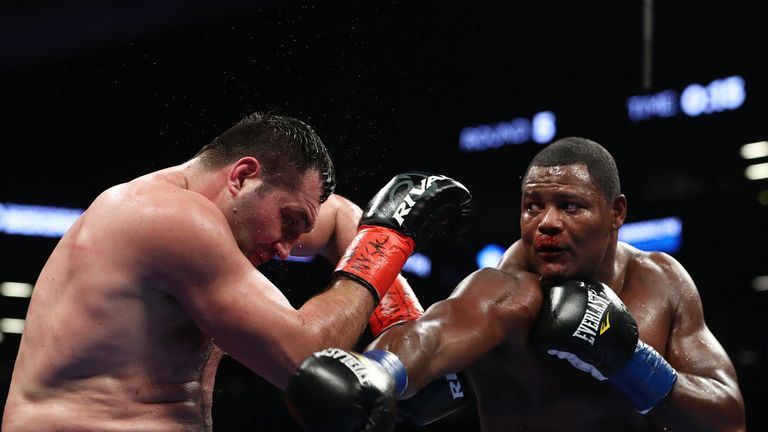 Anthony Joshua would prefer to fight Luis Ortiz as a replacement for Jarrell Miller on his US debut at Madison Square Garden on June 1, according to promoter Eddie Hearn.

Joshua was set to defend his IBF, WBA, and WBO titles against Miller before the recent discovery of a number of 'adverse findings' from recent samples taken from the Brooklyn fighter.

Joshua still intends to press ahead with his first bout on American soil, live on Sky Sports Box Office, with - in Hearn's words - "five or six fighters" still in the frame to meet Britain's unified heavyweight champion of the world.

"To be honest with you, I think Anthony Joshua's choice is Luis Ortiz," Hearn said.

"I think he wants to make a statement. It is dangerous. We have to speak to Rob McCracken [AJ's trainer].

"It's not ideal, he [Ortiz] has got to accept the fight. There have been some minor talks after he initially ruled himself out.

"But there is a whole list of other guys as well, and [unbeaten American] Michael Hunter is on the list, but I think for Joshua, honestly in his mind, I do think he has one eye on Luis Ortiz."

Hearn still expects to have a new opponent for Joshua in place next week but admits he remains outraged by the actions of Miller, who released a video on Instagram where he said he was 'hurting on the inside' after blowing his chance to fight AJ.

"At the moment we are still getting over the disgust, to be honest with you," Hearn said.

"I saw Jarrell Miller's video today and he says that he is hurting, but I think the sport of boxing is hurting, to be honest with you.

"This isn't a 100m sprint, this isn't a game of tennis, this is a sport where the aim is to go in and knock your opponent out. I'm disgusted that Jarrell Miller has attempted to get a physical edge in a physical fight like this with Anthony Joshua."