"I was caught with a shot right below the belt and I could feel it. I was in pain. I could feel it in my stomach, and my legs kind of seized. I couldn't continue"

Khan was left doubled over by a low blow, but with the Briton hampered by an arm injury, trainer Virgil Hunter mercifully called a halt to the one-sided fight. 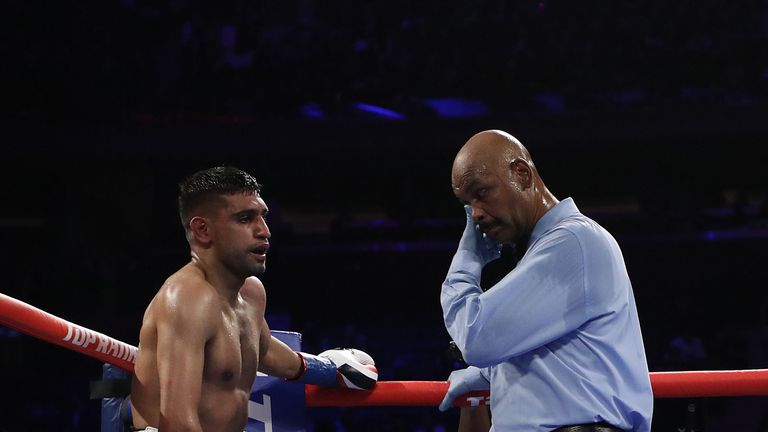 "I could not continue. I'm not one to give up any fight. I'll fight to the end, you have to knock me out to get me to give up you know. I was hit with a hard shot below the belt."

After consulting with Hunter, referee David Fields waved off the fight and declared Crawford the winner by TKO after 47 seconds of the sixth round.

"I now realise why he's one of the best pound-for-pound fighters in the world. I'm a good boxer but he was showcasing great skill, great movement," said Khan.

"I couldn't continue, I could not continue. I'm not one to give up any fight. I'll fight to the end, you have to knock me out to get me to give up you know. I was hit with a hard shot below the belt."

Khan was dropped by an overhand right in the first round after over-reaching with a left jab and after making it to his feet was caught again before the bell.

The 32-year-old landed a decent right hand in the second and opened the third with a sharp right as the American switched stances and pondered his next move.

Khan was in trouble again in the fourth as Crawford began to whip in punishing body shots but the challenger replied with a right hand just before the end of the round.

Crawford began to land regularly in the fifth to both the body and the head, Khan took the shots well and responded again with a decent right to finish the round.

The former unified light-welterweight champion had begun to struggle with what appeared to be an injured right arm and was taking regular punishment before the premature ending in the sixth round when he was withdrawn following Crawford's low blow.

"The crowd will always be bloodthirsty and want to see a dramatic ending but you have to look out for the safety of the fighter. He's not the kind of fighter to make things up. I believe he was incapacitated," said Hunter.

"We knew we were behind but Amir was starting to work things out and pick up his rhythm.

"Amir didn't take the type of beating that says he should retire. He showed he could move - his legs aren't gone - but he fought a hell of a champion tonight. I will be honest with him when I think it's time to retire."

The American southpaw, who won silver at the Rio Olympics, dazzled experienced Puerto Rican Diaz with quality shots from the opening bell to secure his 11th straight win with scores of 100-90 99-91 98-92.

"I want to fight all the champions," said the 21-year-old. "My defence is the best in boxing. I feel like I'm the next Floyd. I want Josh Warrington."

Teofimo Lopez stopped Edis Tatli with a stunning body shot in the fifth round of their lightweight clash.

After an even few rounds, the highly-rated New Yorker began to find success with his heavy punches in the fourth before dropping his man in the next with a superb right which left the Finn unable to continue.

"I want a world title shot next. That's what I want. We promised to take over the show, and once again, I took it over," said Lopez.