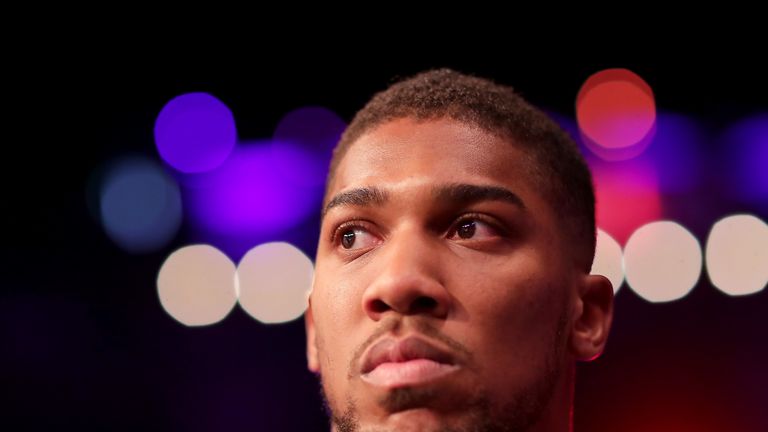 Anthony Joshua must be ready for a 'war' with Andy Ruiz Jr, says Eddie Hearn

The California-based Mexican has been confirmed as the new opponent for Joshua's US debut in New York after Jarrell Miller failed a drug test, meaning the 29-year-old will instead target the WBA 'Super', IBF and WBO titles at the famous Manhattan venue.

Ruiz Jr is fresh from a destructive win over Alexander Dimitrenko, who was stopped after five rounds earlier this month, and he intends to rip away Joshua's belts in his bid to be crowned as Mexico's first world heavyweight champion.

"This is my chance to make history," said Ruiz Jr. "I want to be one of those greats like Julio Cesar Chavez, Mike Tyson, Evander Holyfield, Lennox Lewis. I want to be in that category.

"I think the fight is going toe-to-toe, two guys smashing each other's faces. I'm going in there to throw combinations like I've never done before, to improve my speed.

I'm going to bring the titles back to Mexico, it's going to mean everything.

"I think being so tall he fights like a big robot. I think with my style, my speed, my movement, I don't think he's fought anybody like me. It's going to be a whole different ball game. All the guys that he's fought, they usually run around from him. I don't think he's good going back. I'm going to bring the pressure, the speed, and the combinations to him.

"When I do pull out this win, everything is going to change. I'm going to bring the titles back to Mexico, it's going to mean everything. I'm going to be able to change my whole family's lives; my life and all my kids'. It's a win-win situation right now, but the main thing is to win the fight and make history."

In his first world title fight, Ruiz Jr suffered a razor-thin majority decision loss to Joseph Parker for the WBO belt in 2016, which is the sole blemish on his record, including 32 victories and 21 stoppages.

Joshua must adapt his preparations for Ruiz Jr, who is renowned for his swift hand speed, but is confident he can deliver another explosive victory.

We have worked in the boxing gym week on week and whoever is put in front of me at Madison Square Garden on June 1 will be dispatched in style.

"Ruiz Jr is a different kind of challenge but one I embrace," said Joshua. "We have worked in the boxing gym week on week and whoever is put in front of me at Madison Square Garden on June 1 will be dispatched in style. The rent will be collected."

Matchroom Boxing boss Eddie Hearn has welcomed confirmation of Ruiz Jr and rates him as a more dangerous proposition than Miller.

"After a tricky week I am delighted to announce Andy Ruiz Jr as AJ's opponent for his US debut at MSG on June 1," said Hearn.

"When we selected the opponent, I wanted someone with fire in their heart, someone who genuinely believed that they can win and become world heavyweight champion. Andy showed that desire.

This is going to be a war. Andy brings Mexican heart but he will meet the best heavyweight in the world in June head on at the Garden.

"In my opinion, this is a tougher test than Jarrell Miller. Andy punches harder and is much faster. This is going to be a war. Andy brings Mexican heart but he will meet the best heavyweight in the world in June head on at the Garden. Do not blink!"

"When I saw Anthony in camp last week his message was clear, 'Line them all up!' He really wants to dominate the division and Ruiz Jr is the first man in his way.

"It will be an absolutely thrilling night on Sky Sports Box Office as AJ makes his US debut in the iconic Madison Square Garden - and the incredible Katie Taylor bids to become the undisputed world lightweight champion!"