Whyte vs Rivas: Dillian Whyte reveals how he would defeat Andy Ruiz Jr

"It's Joshua's thing, he always tries to win the first two or three rounds, and that's his downfall."

Dillian Whyte watched with interest as Andy Ruiz Jr shocked Anthony Joshua and has revealed how he would conquer the new unified heavyweight champion.

'The Body Snatcher' is preparing for a high stakes clash against Oscar Rivas at The O2 on July 20, live on Sky Sports Box Office, with the winner expected to become the WBC mandatory challenger.

Ruiz Jr currently holds three of the major world titles following his stunning stoppage of Joshua in New York, but Whyte admits he would adopt a different game-plan if he shared the ring with the dangerous Mexican.

What strengths do you need to show against Ruiz Jr?

With Andy Ruiz, you've got to get the double jab going. Good speed, good double. You know he's going to come forward and you need to be patient. Take your time and walk him onto the big punches.

You can't just go out there and throw a big single against him, because he's experienced, he's had over 30 fights. He'll see the big singles coming. You've got to set him up, back up a bit, use your range against him. Let him walk you down and clock him with a shot when he's not expecting it.

How do you keep Ruiz Jr at range? 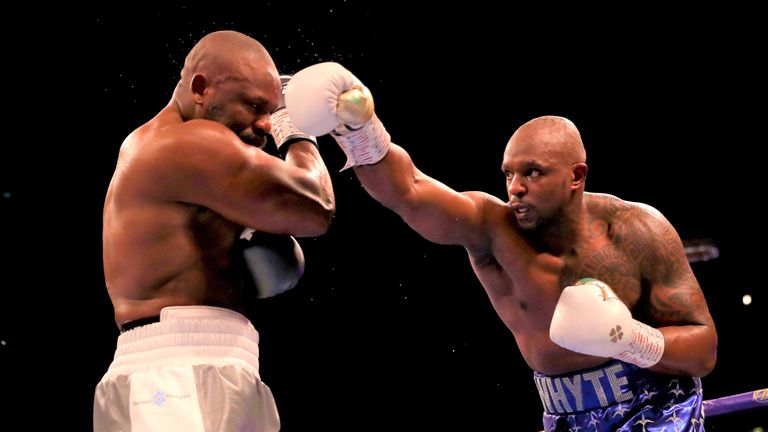 Patience is key. You start mixing it with him on your terms when you're ready.

He only closed the distance quick against Joshua because Joshua tried to trade. Listen, you don't go into a fight and start trading with someone shorter than you, with quick hands straight away like that. No, you've got to try and get yourself going, be a bit patient.

You might not win the first one or two rounds. It's Joshua's thing, he always tries to win the first two or three rounds, and that's his downfall. Patience is key. You start mixing it with him on your terms when you're ready. Don't let him force you to mix and that's what Joshua did, Joshua started mixing with him too early.

Is it too dangerous to trade hooks?

It is a danger zone in any fight. Left hooks are a hard punch to throw. You have to set it up. Sometimes you take a chance. When I fought Chisora we both landed left hooks, but I just made sure mine was a bit shorter. I tensed my shoulder and my arm at the last minute.

With Browne, I broke him up slowly, and then I knew he was ready. I knew that I all I needed to do was sustain one big combination for 15 seconds and land the big one. But I need to disguise it in a combination. I couldn't just go out there, throw the big hook, and get him with it. I need to throw three or four punches, and then that's what I did.

Would you test Ruiz Jr's stamina?

He [Joshua] seemed like he didn't believe in anything that he trained on, or worked on, he was asking crazy questions in the corner. You have to believe in what you've done.

How do you stop yourself rushing in like AJ?

Joshua was shocked, but that's patience, that's maturity and experience. Growing and realising that this man is tough, this man is dangerous, and he throws big hooks, big uppercuts, and big overhands.

You cannot run in, you've got to take your time and be patient, and pick the punches at the right time.

And could you stop him?