Call It Out 2019: Anthony Ogogo asks allies to challenge homophobia

When a family celebration shared on social media attracted trolls, Anthony Ogogo spoke in support of LGBT people. He explains why he's proud to be a champion ally

Anthony Ogogo officiated at the wedding of his sister and her wife in June. When sharing a video of the ceremony on social media, he described it as "one of the proudest moments of my life - not to mention one of the coolest."

Ogogo has enjoyed many sporting highs - a Commonwealth Games middleweight silver medal, Olympic bronze, his victories as a professional. Six months ago, there was the low of calling a premature end to his boxing career, as damage to his eyes forced him to conclude life as a pro fighter at the age of 30. In his ventures outside of the ring - including modelling, appearing on Strictly Come Dancing, and taking part in other reality TV shows - he has never lacked enthusiasm. Recently, he's expressed interest in going into both wrestling and politics... maybe not at the same time, but he'll try to get to grips with anything.

The honour of marrying Joanne to Helen brought him a particular sense of satisfaction, special on a different level to his achievements as a boxer. Ogogo desperately wanted to have been celebrating gold at London 2012, but the memory of bringing his bronze medal to show mum Teresa as she lay in hospital recovering from a brain aneurysm is one filled with the utmost joy. Family matters so much.

In the wedding video, he guides the happy couple through their marriage vows; he signed off the tweet with #LoveIsLove, a rainbow flag, and smiley-face emojis about his attempts to keep Joanne and Helen word perfect. But while Ogogo's pride was echoed by scores of likes and positive replies, there were some homophobic comments and reactions too. The level of their nastiness riled him - specific, hateful, even threatening.

1 week on from one of my most proudest moments of my life - not to mention one of the coolest - marrying my sister to her beautiful bride 👰🏽👰🏼.

"If you're a man and a man, or a woman and a woman, it's totally irrelevant, and the fact that some people look down upon that, it upsets me," he tells Sky Sports. "It angers me. It's really saddening."

Many people would simply move on, but Ogogo wasn't prepared to let the abuse slide. He called it out in a series of follow-up posts, and was widely applauded for being an ally to his sister, his new sister-in-law, and LGBT people in general. "I'm blown away by the love and support from old and new followers," he tweeted; the hundred or so followers he lost were swiftly replaced by thousands of new ones.

Interest in Ogogo's stand against homophobia led to an appearance on ITV's This Morning show to discuss the Twitter abuse, and the issue of trolling in general. With his family, he accepted invites to Pride in London and the annual parade in Norwich, where he launched the march alongside the Lord Mayor and Town Cryer wearing a rainbow cowboy hat. The Ogogos are from Lowestoft on the East Anglian coast; Anthony once played for Norwich City's youth team, and supports the Canaries.

• N O R W I C H P R I D E • I was honoured to launch @norwichpride yesterday alongside the Town Mayor and Town Cryer. Pride is all about bringing people together and being proud of who and what you are. Love is love and it should be celebrated regardless of gender. Having my family there to dance and join in the festivities was the icing on the cake, love you guys @ogogoteresa @leanneisio @joanneogogo @toniogogo @carlyogogo - fantastic video Carly. . . . . . #Pride #Norwich #NorfolkDay #Family #LoveIsLove #LGBT #Rainbow #Equality

Football has now brought Ogogo's voice to the fore on this topic once again. He'll be on a panel discussing LGBT-phobia in its various discriminatory forms at Call It Out 2019, an event being convened by the network of UK LGBT fans groups Pride In Football at West Ham's London Stadium this Saturday. Supporters and other stakeholders from across the game - particularly those affiliated to clubs that don't yet have their own LGBT fans group - are being asked to attend, contribute, and learn more about why taking decisive action on inclusion makes sense.

"I'm just standing up for what's right," says Ogogo. Following the events of the summer, he wants more straight allies - in sport and elsewhere in society - to stand up too. "I'm glad that I can have a small ripple effect in this and whatever good I can do for the cause, then great.

"People should just learn a little bit. It's not scary. I feel very lucky that my sister is a lesbian - I've been enlightened by that. 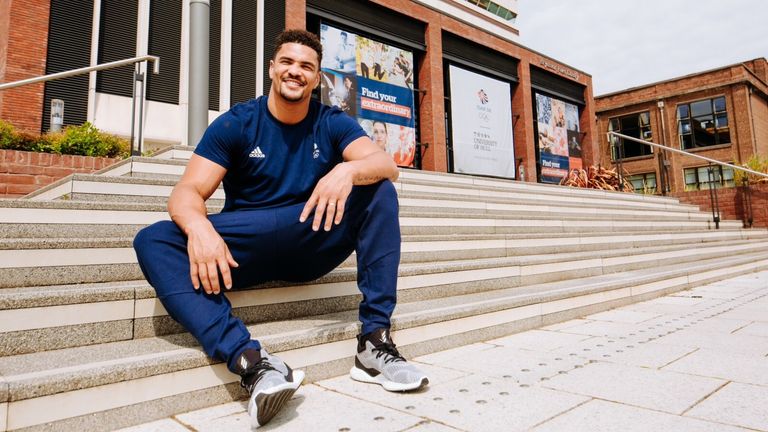 Boxing's a very macho sport and you don't get many guys actually saying they're allies. I'm honoured to be known as one. It's very humbling

"Joanne was with boys when she was a teenager and as a young woman. She thought that's what you've got to do, and to marry a man one day, and she wasn't very happy because she was living a lie.

Ogogo says his mum, a single parent, raised him and his sisters to be "open-minded" but that there were other relations who reacted negatively to Joanne's coming out. "She had some not very supportive comments. There were things said and actions done." He uses the phrase "mini-heroes" to describe her, Helen and the other gay people they know. "It shows massive amounts of bravery and courage to come out. We get one shot at this life, and we deserve to live it the only way we want to live it. If that's being with someone who's the same sex as you, then so be it."

Ogogo married his childhood sweetheart Casey in 2017. When he retired from boxing in March, he saved "the biggest thank of you all" for his wife. She regularly shared his heavy burden of "injuries and bad moods", steadfast amid all the setbacks. "I am forever in your debt," he added in his statement, "and if we lived a thousand lifetimes, I still wouldn't be able to show you what you mean to me."

It's why he's prepared to challenge attitudes like those on display in the cruel tweets. He tries to empathise with the struggles faced by people like his sister. "I've never had those gut-wrenching moments where you want to tell your friends but you're scared so you put it off by another year. And I feel very fortunate, because it must be really difficult." He mentions a friend who doesn't feel comfortable holding his husband's hand in public. "He's afraid of what might happen. I think that's so sad."

Attempting to alleviate any 'discomfort' among straight men when it comes to talking about sexuality is one way Ogogo hopes to help. He's quick to play down any contribution he may be able to make when compared to that of LGBT people themselves, but he is conscious that there is a shortage of vocal male allies, particularly in sport. "I think it's a small ripple effect but if the fact that I've got a little bit of celebrity behind me carries any weight, then great. Boxing's a very macho sport and you don't get many guys actually saying they're allies. I'm honoured to be known as one. It's very humbling."

He recognises too that in some instances, it's a tough task to teach acceptance of gay people. "I've got a few friends, football mates actually, that don't really like it. They kind of sneer their noses up about it - they don't really want to know. They're stuck in their ways and honestly, I don't know what it would take for them to change their opinion."

So how do you try? "It's just education really. They don't understand. A lot of the time, it's ignorance. Now that may be intentional - people may not want to learn. But it's not 'bad'. It doesn't hurt anybody - it's just two people in love.

"I woke up one day when I was a kid, and I fancied Katy Hill from Blue Peter. Nobody taught me how to do that. It's innate. You can't choose who you're attracted to, so why should you be punished, reprimanded, or looked down upon by society?"

The rise in discrimination, fuelled by social media, is rarely out of the football headlines these days. Ogogo doesn't feel targeted personally but insists that's not a reason to sit this one out. "I've never had any negative experiences. I think I'm quite a nice bloke, and I think everyone should be nicer to each other. Some people may say that's a bit naive but I live by the belief that if you show me respect, I'll show you respect."

He also wants to show his gratitude at Saturday's event. "I can massively commend the LGBT community, for being so united and supportive of one another. I got a lot of love, not just from gay or trans people, but from people generally, just for sticking up for what I believe." For this fight, Ogogo's firmly in their corner.

'Call it Out 2019: A Europe-wide agenda for action on LGBTphobia in Football' is being held at the London Stadium on Saturday. The event is open to fans and other stakeholders and consists of a programme of networking, panels and workshops. Register to attend here.

Sky Sports is a member of TeamPride and supports Stonewall's Rainbow Laces campaign. Contact us at Sky Sports if you'd like to share a story to help raise awareness around LGBT inclusion in sport.