"I think any other country in the world, they would have stopped the fight."

Tyson Fury was "very lucky" to avoid a shock defeat against Otto Wallin after suffering a cut that could jeopardise his February rematch with Deontay Wilder, says Eddie Hearn.

Britain's former world champion battled to a points win over Wallin last weekend, despite sustaining a gaping wound over his right eye in the third round at the T-Mobile Arena in Las Vegas.

But Hearn believes Fury was fortunate to avoid a stoppage loss as the referee ruled the cut had been caused by a punch, and the Matchroom Boxing boss questioned whether the heavyweight can recover in time for an expected second fight with WBC champion Wilder.

"I haven't seen it, because I was on a plane, but I landed and checked my social media and saw the scores and saw the cut," Hearn told Sky Sports. "I think firstly he's very lucky not to lose the fight with that cut.

"I think any other country in the world, they would have stopped the fight. I just think in those fights against that opposition sometimes you don't get yourself motivated to perform and obviously he didn't perform at his best, but he had the injury as well and I think you'll see him perform a lot better against the likes of Wilder and stuff like that. 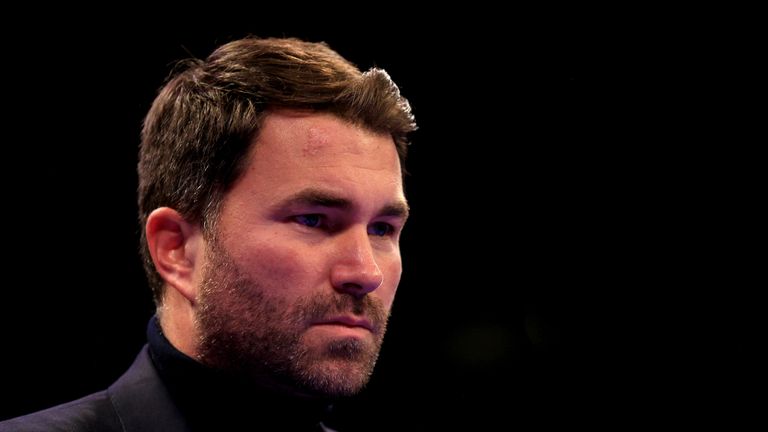 Anthony Joshua will attempt to reclaim his world titles in a rematch with Andy Ruiz Jr on December 7, live on Sky Sports Box Office, and Hearn still hopes his fighter could take on Fury or Wilder in the future.

"Joshua's fight dates have always been extremely solid and this one, December 7, Saudi Arabia, that's what we focus on," he said.

"I hope that Wilder-Fury does get made - it's a great fight for the division. Two great fighters and I hope that AJ can do the goods in Saudi Arabia and hopefully move on and fight the winner, but right now, all the talking about future fights is out the window. Just pure focus on Andy Ruiz."