Ritson vs Davies Jr and Cheeseman vs Fitzgerald on Saturday at 7pm, live on Sky Sports Action 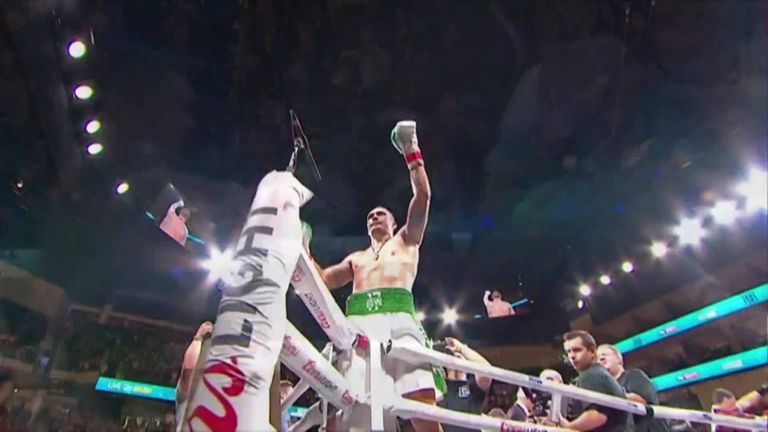 Highlights of Usyk's dazzling skills in his heavyweight debut

Oleksandr Usyk will watch Andy Ruiz Jr vs Anthony Joshua from ringside as his challenge to the winner looms.

The brilliant Ukrainian won his heavyweight debut against Chazz Witherspoon at the weekend and is the mandatory challenger to the WBO belt that, along with the IBF and WBA, will be decided in the rematch between Ruiz Jr and Joshua on December 7, live on Sky Sports Box Office.

"He will be out in Saudi Arabia to watch that fight," promoter Eddie Hearn confirmed.

Usyk warned the winner of Ruiz Jr vs Joshua that he plans an immediate challenge in early-2020, saying: "I am ready to fight them. If they are going to [offer] it to me, of course I am going to take it."

The former winner of an Olympic gold medal, the World Boxing Super Series and the undisputed cruiserweight title has no intention of wasting time with another fight before challenging for the heavyweight gold, Hearn explained.

"The instructions to me are: 'world heavyweight championship next'," said Hearn.

"It wouldn't hurt to have one more. But they say: 'we have won every belt at cruiserweight, we have had our heavyweight warm-up, we are ready'.

"My message is straight to the world title."

But he explained that his physique may continue adapting to his new division. He said after last Saturday's win: "I will add more weight. It is no problem to add more weight.

"The problem is speed. We need to add weight properly, the right way, because we don't want to lose boxing skills."

"That is great sparring for both," Hearn said.

Hearn continued about Joshua and Chisora preparing together: "The difference in this camp is the quality of sparring - replicating Ruiz Jr's style. It is a unique style and not many people can do it.

"I've seen pictures of Ruiz Jr - he looks lighter but I don't know if they were photo-shopped!

"There are plenty of hard rounds of sparring to go but AJ is a good place, he's just turned 30."