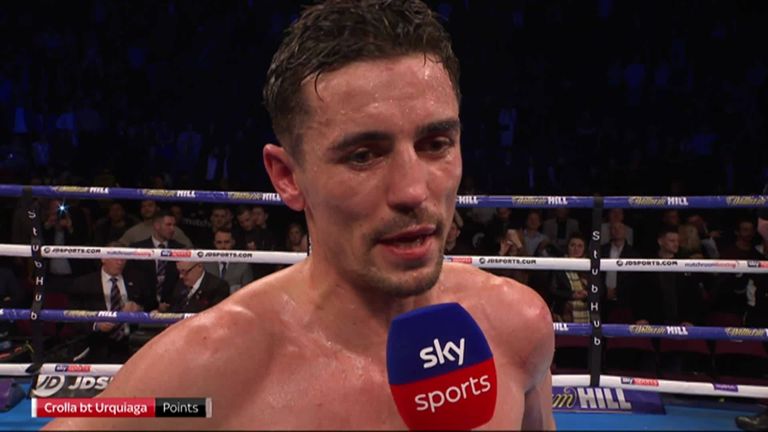 Anthony Crolla ground out a hard-fought majority decision over Frank Urguiaga in his farewell fight to claim the vacant WBA continental lightweight title.

Crolla, who in his last outing in April shared a ring with pound-for-pound star Vasilily Lomachenko, secured a 95-95, 98-92, 97-93 verdict over Urquiaga to bring the curtain down on his 45-fight career at his beloved Manchester Arena.

"I thought I had done enough, I know time's up now. I've had a great career and loved every minute," Crolla told Sky Sports afterwards.

"Manchester, thank you so much. I've lived the dream.

"I enjoyed the fight, I knew I was past it, I don't want to hang around and be a stepping stone."

The popular Mancunian, fighting for the 14th time at the venue where he made his professional debut, won and lost a world title, was forced on the back foot in the opener by Urquiaga.

Crolla began to find his rhythm more in the second round but the Barcelona-based Urquiaga continued to pose a threat, landing shots to both the head and body.

After the pair traded body shots in the third, Urquiaga repeatedly found the target with his right hand in the fourth.

The former WBA champion backed up his rival in the fifth and landed good one-twos when up close before getting behind his jab in the sixth.

'Million Dollar' continued with his ramrod jab in the seventh and managed to evade some wild punches but the Peruvian landed a decent hook in a heavy-handed finish to the round.

The penultimate round saw Crolla attempt to back up Urquiaga but his elusive opponent refused to comply.

After the pair hugged ahead of the 10th and final round, Crolla raised his game with the backing of the crowd to secure victory via a majority decision and retire with a 35-7-3 record.