Billy Joe Saunders says he has the tools "to undo" Saul 'Canelo' Alvarez and could move up to light-heavyweight for a potential mega-fight.

The unbeaten Brit makes the first defence of his WBO super-middleweight world title this Sunday morning in Los Angeles, live on Sky Sports Box Office, and is eager to make an impression on his American debut.

'Canelo' became a four-weight world champion after brutally stopping Sergey Kovalev at 175lbs this past weekend and now Saunders wants to be next in line for the Mexican pound-for-pound king.

"I want Canelo, they keep saying he's the best. Floyd Mayweather is the only man to beat him, I know I can be the second man to beat him," Saunders exclusively told Sky Sports.

"It'd be a very tough challenge but there is something inside of me that I've known since the day I turned pro. I knew our paths would cross and I'm 100 per cent sure that I'd beat him.

"I might move up to 175lbs and then I become mandatory to him. He either fights me or vacates.

"Give me a fair playing field and I know I have the beating of him. I do have the lock to undo 'Canelo'. I'm feeling the best I have, I'm ready to rock and roll, I want these big fights."

Despite his interest in 'Canelo', the 30-year old is refusing to overlook the more immediate challenge of unbeaten Argentinian Coceres. 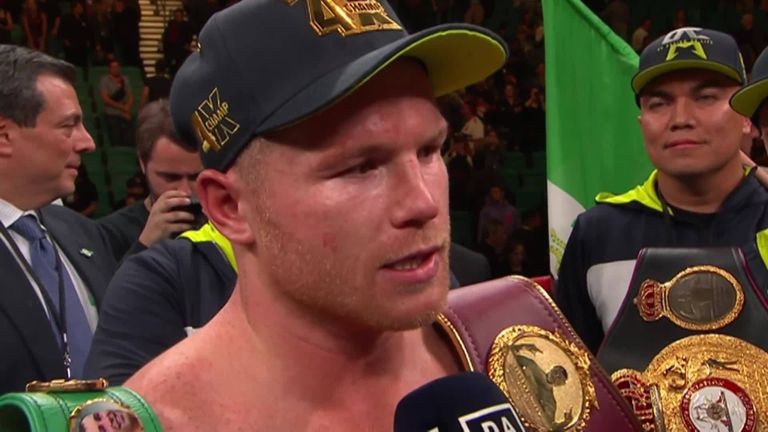 "I'm very excited for my American debut and the chance show the American fans what I'm about. I want to put my name in line for the likes of 'Canelo' and 'GGG'.

"What goes through my head for this weekend is whoever puts in the best performance will steal the show.

"I just need to put on a masterclass display so people say "whose he? Look up his name." people will remember my name."

Watch Billy Joe Saunders vs Martin Esteban Coceres on the KSI-Logan Paul 2 bill on Saturday, live on Sky Sports Box Office from midnight. Book it via your Sky remote or book it online here. Even if you aren't a Sky TV subscriber you can book and watch it here.