How AJ controlled his own mind... and took control of Ruiz Jr's 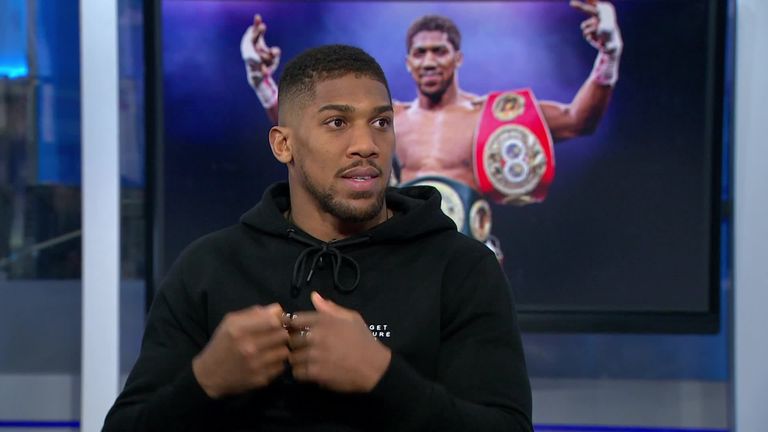 Joshua reflects on both his fights with Ruiz Jr

One of Anthony Joshua's final sparring sessions before the rematch with Andy Ruiz Jr was a disaster, he now admits.

"I tried too much, punched too much - I was punching forwards, punching from too close, when the strategy was to do what works," he exclusively told Sky Sports.

But it didn't matter because the final days and hours of Joshua's revenge mission were spent with zen-like focus on his mind rather than his body. He spent plenty of time outside to avoid feeling claustrophobic, he rehearsed his ring-walk in an empty arena and, most tellingly, he studied Ruiz Jr's personality and found ways of making his rival feel pressurised by asking him specific questions that touched a nerve.

These were the one-per-cent gains, the fascinating details that make all the difference at the top level. They are also the lessons that Joshua will take forwards.

The final days and hours

"I spent two weeks in Saudi but, in New York and Miami, I spent four or five weeks there which is quite a long time," Joshua explains. "Saudi is less hustle and bustle.

"Two weeks in Saudi was like being somewhere just for business, which was good. You could go to Saudi and do a training camp because it's a simple way of life."

Those closest to Joshua knew that the serenity of the desert, a far cry from New York, would better suit his personality.

"I've been to the Middle East with AJ before - he resonates well out there, he feels comfortable, he enjoys the climate," his manager Freddie Cunningham said. "So I knew Saudi would be similar which is important to him.

"Manhattan is so crazy, as soon as you step outside your door. Saudi was very calm, very relaxed, very focused.

"Literally in Manhattan, you walk out of your door and you're in the city - go go go. That can be suppressive."

Joshua agrees, saying: "Exactly, it's all about focus. I'm not saying New York is bad, but Saudi caters for a peaceful way of life rather than the hustle and bustle, which is what a fighter needs."

The British Embassy took care of Joshua's needs and provided private training facilities during his stay.

"I was doing it for Britain and I was on British soil," he said. "I was able to be outdoors and get used to the weather before I fought outdoors, which is something people were concerned about.

"The only other gym was in the basement of my hotel and there was no air. It's better to be outdoors to train. I wish it was hotter [in the UK] because I love to train outside."

Replicating the privacy of the week prior to a fight now becomes a challenge for Joshua's team. They know the ghost of New York must be addressed one day.

"We have to fight there again," said his manager Cunningham. "We would do it slightly differently - we tried to minimise travel time by staying in Manhattan but next time maybe we would stay outside of New York to have our own space. That is really important."

While much of the pre-fight chatter was about tactics and technique, Joshua knew the key was psychological. Impose himself on Ruiz Jr beforehand and it would naturally follow the same pattern inside the ring.

Joshua explained: "We understand how Andy thinks from [Sky Sports show] The Gloves Are Off. He finds it difficult when you ask him a direct question. He says 'well, yes, but, erm…'"

That is why Joshua smilingly teased Ruiz Jr when they went face to face, three days before their rematch. Sure enough, Ruiz Jr did not answer convincingly.

"I asked him: 'how do I beat you?' Instead of saying 'you can't beat me', he gives an answer that I wanted to hear. He revealed the strategy to beat him.

"You have to know how to get things out of people. You learn in your industry how to manoeuvre around certain people. I have learned how to talk to characters that I'm fighting because I study them for a long time."

When they stepped in the ring, Ruiz Jr was subconsciously already used to being under the cosh.

Rehearsing how to be comfortable

Joshua found himself stood in an awkward position, unable to step through the ropes, with the eyes of the world staring at him and expectation at its highest. Don't mess up.

"I didn't feel comfortable so I decided to get in the other way," he explained. "I was in control and didn't let the event overcome me."

That's because he had taken precautions to feeling unfamiliar. Joshua walked through his ring-walk twice, and visited the Diriyah Arena a third time, when it was quiet and empty in the days leading up to the rematch.

The irony is that he took so many positives from entering the ring first, as the challenger, that for his next fight he must recalibrate to enter second, as the champion.

"It gave me ownership of the ring," Joshua said of entering before Ruiz Jr. "I embraced it, greeted the crowd, felt the canvas. When Andy came in, I locked my eyes onto him while he was still going through that process - he had a lion across the ring staring at him, and it put him into an awkward position.

"Even as champion I would love to come in first. I had a longer period of time to absorb."

The nightmare in New York

The wheels were set in motion for Joshua's revenge mission by his team's immediate reaction to a shock defeat, six months ago. Instead of parting ways on the Monday afterwards, after a Sunday of chewing the fat, they instead spent several days together. Not worrying about what had happened, but just being normal.

"We played a lot of chess," said Joshua's manager Cunningham. "We were given a big chess set by Madison Square Garden and we played thousands of games. It was good to have decompression time.

"AJ got a lot better at chess - he hadn't played a huge amount but, by the end, it got very competitive. It was nice to have a bit of normality for our close team."

When the rematch was sealed, the team made a promise to each other: nobody talk to AJ about anything that would happen after December 7, in any aspect of his life.

"We made a conscious effort not to speak about anything that would happen after the fight," said Cunningham.

"We've got plenty of things that we've been doing, that he's had no idea about - not even a Christmas party!

"The fight was such a big moment that we made things simple: the fight was the end-date so we didn't talk to him about anything else. He has a lot of trust in the business."

None of these psychological tweaks were recommended by an expert, it was explained. They just became the culmination of everything Joshua knew he had to do, and should have done before the first fight.

There is an overwhelming belief that the experiences of 2019 have evolved Joshua into a completely different beast ahead of next year.