Anthony Joshua: I'd beat Tyson Fury after sparring him

Joshua: "When I say I'll go and spar Fury, it's because I have a plan in my mind that no one will really understand. I'll beat him" 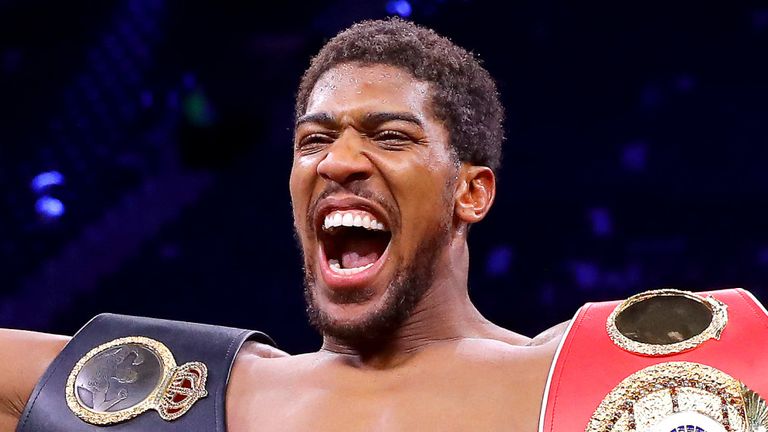 Anthony Joshua insists sparring with Tyson Fury would help him win a future fight between the pair.

Joshua reclaimed his IBF, WBA, WBO and IBO titles when he beat Andy Ruiz Jr on points earlier in December, and has since offered to spar with Fury ahead of the Gypsy King's rematch with Deontay Wilder in February.

The 30-year-old is adamant he wants to help Fury beat Wilder and believes sparring would only help him if the two fought each other in the future.

Joshua told Sky Sports News: "It's all for experience at the end of the day. What I learnt from myself and who I am - if I make a mistake once, I don't make it again.

"With Fury, sparring him for the first time, maybe for my benefit I might go in there and just batter him around the ring or he might batter me around the ring.

"If that is the case, I know I can take my notes and go back when I'm ready to fight him and correct all my wrongs.

"Everyone's like 'you wouldn't do it' but no one knows how my brain works. Everyone talks from their own experiences and I can only talk from my own.

"So when I say I'll go and spar Fury, it's because I have a plan in my mind that no one will really understand.

Asked if Joshua would like to issue a message to Fury, he replied: "If you want the help, I'm always here and if it fits in with my schedule, I'll definitely be a support to make sure that you bring that WBC Championship back to England."

Joshua's next opponent is undecided, but is expected to be either the mandatory challenger for the WBO title Oleksandr Usyk or for the IBF belt Kubrat Pulev.

Frustratingly for the champion, he is likely to have to vacate one of his belts in order to fight Usyk or Pulev, however, he is looking forward to an exciting 2020.

Joshua said: "I would hate it because it's so hard to go round and collect all these belts, it's really difficult and I've kept hold of them for so many years.

"So to have to vacate because of the boxing politics would be annoying, but there's things that are out of my control. If I do lose one, I know I'll be able to get it back."

"Time moves so fast, it's easy to forget things. So we just look forward into the new year and more challenges, more competition and hopefully more memorable years to come"

"It's 2020 vision. Whoever's on the cards will get taken down. I just keep myself focused and whoever wants it can get it."