Shields was having only her 10th professional outing in the twice-delayed clash with Habazin and was barely troubled in continuing her perfect record by claiming the vacant WBC and WBO titles.

In doing so, the 24-year-old bettered the feat of Vasiliy Lomachenko and Kosei Tanaka, who both won third world titles at different weights in their 12th fight.

Olympic champion Shields was already a champion at super-middleweight and middleweight, but had no problem in dropping to 154lbs against her over-matched Croatian opponent, albeit one she was unable to stop before the judges' cards came into play.

They would score the bout 100-90, 99-89 and 100-89 in favour of Shields, who was going the distance for the sixth successive fight and is now likely to move back up to middleweight to defend her undisputed title. 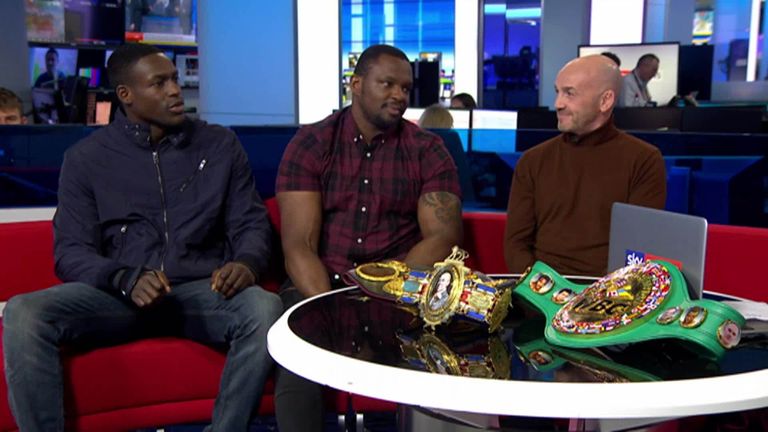 Anna Woolhouse is joined by Barry Jones, Dillian Whyte and Richard Riakporhe to bring you the latest news from boxing and answer some of your tweets. Click here or head to iTunes for the full extended podcast

Shields' advantage in skill and speed were obvious from the first bell, dominating with her jab and forcing Habazin on to the defensive.

Habazin was forced to take a knee in the sixth after a series of big shots to the body and head, but that brief rest was just enough to get her to the bell.

Bravely, the Croatian fighter was able to withstand almost constant pressure over the last three rounds as Shields went for the stoppage, but there was never going to be a moment's doubt over the scores when they were tallied.

"We spent so many months in camp for this fight," said Shields, whose potential future opponent Elin Cederroos watched from ringside after a successful earlier super-middleweight title defence against Alicia Napoleon-Espinosa.

"It wasn't what I wanted, but I'm happy with the improvement. This feels great - I did it in 10 fights. Now I'm number one, the fastest boxer in history to become a three-division world champion.

"I am the greatest woman of all time because she couldn't do nothing with me. Zero.

"I just want to be a better fighter, that's all. I want to grow women's boxing. I want us to have equal pay, equal opportunity. I would love to share a card with Deontay Wilder, Errol Spence. I want to be in with the likes of those guys."