"We can go back and forth all day, but the main thing is we're fighting on 28th and we're stepping in the ring" - Josh Kelly

David Avanesyan's team angrily questioned whether Josh Kelly would 'turn up' for their European title fight as tempers flared at their first press conference.

The unbeaten 25-year-old was forced to withdraw from a scheduled fight with Avanesyan due to illness in December 2018, but the welterweight duo will instead battle for the European belt on March 28, live on Sky Sports, with Joshua Buatsi and Conor Benn on the same O2 bill.

Avanesyan's manager Neil Marsh was quick to voice his frustration about the postponement and raised fresh doubts about Kelly's willingness to face the big-hitting Russian, which were dismissed by the Sunderland man.

"Listen, I will respect Josh Kelly when he gets in the ring with David Avanesyan," said Marsh, who offered a Valentine's Day rose to Kelly's trainer Adam Booth.

"I am concerned that they won't turn up. Like if I was managing Josh Kelly, I wouldn't be taking Avanesyan.

"I'm not talking [about a] 38, 39-year-old boxer, who's had his best days. You're talking [about] a kid who is in the best form of his life, who is hungry, whose total desire is to provide for his family, and that will be with beating Josh Kelly.

"I have got absolutely no doubt that Avanesyan knocks Josh Kelly out.

"It will be a difficult fight for five, six rounds. He's a fantastic amateur, he'll be moving a lot, he's got a lot of speed, but David is going to get to him." 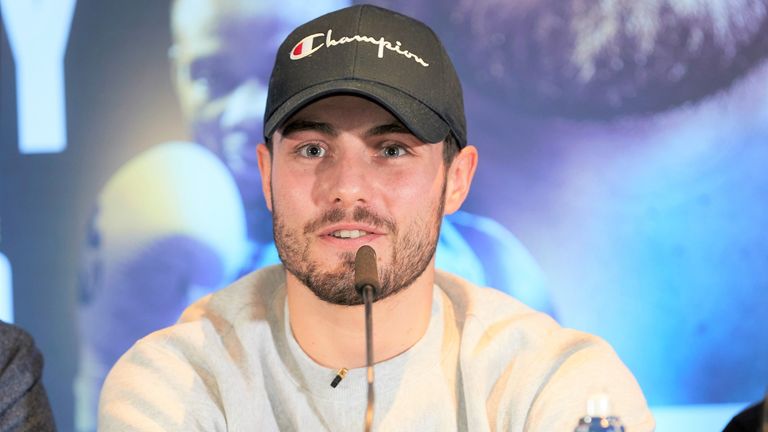 As Neil says, it's too early for me. I've got all this stacked up against us. I'm the underdog, I enjoy being the underdog.

🗣"He's completely irrelevant to me and he's irrelevant to this fight." @BoxingBooth hits back after fiery verbal attack from @neilmarsh3 at first press conference. pic.twitter.com/4NzUccRHnm

Kelly admits he is taking a major risk against the European champion, who has knocked out three fighters since the original fight date.

"We can go back and forth all day, but the main thing is we're fighting on 28th and we're stepping in the ring," said Kelly. "That's what it comes down to.

"As Neil says, it's too early for me. I've got all this stacked up against us. I'm the underdog, I enjoy being the underdog."

Asked whether the fight will go ahead, Kelly quickly replied: "I'll be there."

Buatsi is working towards a world title eliminator, with promoter Eddie Hearn hoping to stage a future fight at Selhurst Park, the home of Crystal Palace football club.

"We offered Garton the fight, my mouth watered for that fight," said Benn. "Jenkins, offered that fight. They brought something to the table, something that I wanted. Now we look at top international opponents.

"This year is going to be an amazing year. I predict more knockouts, more entertaining fights. I might hit the deck a few times, but you know I'm always going to get back up and give it back."