Billy Joe Saunders says Saul 'Canelo' Alvarez has already reached his peak, but insists he is yet to produce his best performance as he awaits news on the world title fight.

Britain's WBO super-middleweight champion has flown back from a training camp in Las Vegas after the coronavirus prevented the planned announcement of a fight against Canelo on May 2.

The Mexican star has recently been linked with an alternative third fight against Gennadiy Golovkin, but promoter Eddie Hearn remains hopeful that Saunders will be next, and the unbeaten 30-year-old intends to produce his finest display against Canelo.

Speaking on Instagram live with Hearn, Saunders said: "I rate him as the best pound-for-pound at the moment. 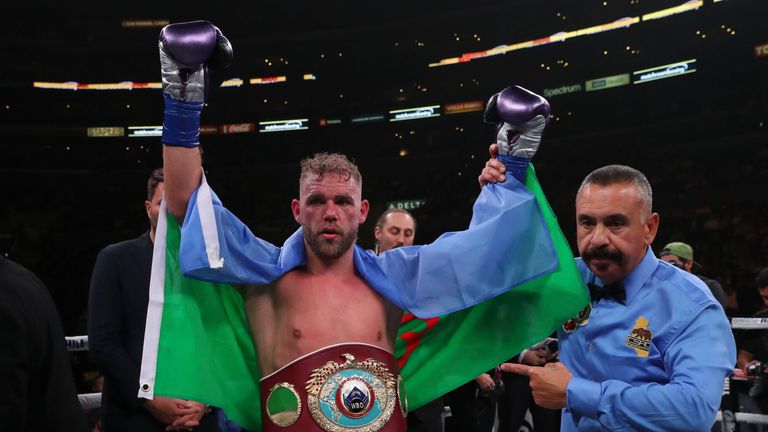 I believe on my night, as long as everything is bang on right for me, I believe I've got the beating of Canelo Alvarez, but he's a brilliant champion.

"For me to defeat him, it's just not about money, don't get me wrong, we're all in it for the money, but for me, if they were to say, 'you're definitely going to win, but you're going to go home and you're not having a penny, I'd say 'yes, let's do that.'

"For me it's all about winning. I really do rate him, I think that he's a brilliant fighter, he's complete, but the thing is - I believe that we've seen the best of him. We haven't seen the best of me yet. I have seen the absolute best of him, the Golovkin fight twice, the Danny Jacobs fight, he's not going to get any better than that.

"I believe on my night, as long as everything is bang on right for me, I believe I've got the beating of Canelo Alvarez, but he's a brilliant champion. You have to beat the best to be the best."

A big unification clash against fellow British world champion Callum Smith could be offered to Saunders, if a new date is not offered for the Canelo fight.

Saunders believes Smith was fortunate to retain his WBA 'super' title in a points win over John Ryder in November, but would still welcome a showdown with the Liverpudlian.

"I believe that it was a close, close fight. If John Ryder were to get the nod, you couldn't have really complained," said Saunders.

"I had him (Ryder) probably one or two ahead, but Callum Smith is also a great fighter and I believe if the Canelo fight didn't happen for me, or him, it's the only fight that really makes sense for the UK fans, whether that's at Anfield or York Hall."