"I'll bring a different style, a different way of fighting. It'll be boxing skills, excitement all the way."

Frazer Clarke is biding his time to become Britain's next super-heavyweight gold hero, but the experienced powerhouse is "very different" to Anthony Joshua, writes Ed Draper.

Like many would-be Olympians, Clarke is being made to wait for another year. Unlike many of those athletes, Clarke has been waiting for more than a decade already.

"I've been around Team GB for 10 years, since 2009. I'm still a bit in the unknown. I could sort of see it [the Olympics postponement] coming, but it's still hard to get my head around," Clarke told Sky Sports.

"I've been waiting for 10 years and I'm telling myself, 'it's only another year.' But can I really wait another year? I was only a couple of days away, possibly, from qualifying."

Clarke isn't sitting around moping in isolation. He's converted his garage into a gym with an exercise bike and weights and is taking advantage of the government's allowances on daily exercise to run regularly.

Since the Olympic qualifiers in London were called off mid-tournament Clarke admits that health, rather than boxing, is far more important during the coronavirus.

"Thankfully, we're (his family) as well as can be."

Still, when normality resumes and the Tokyo Games take place, will Clarke be there? He turns 29 in the summer, but was unequivocal that the gold medal remains the goal.

"That's still the dream. In time, we'll have conversations (with the Team GB coaches) but at the minute the goalposts haven't changed for me. There are two ways of looking at this. Yeah, it's disappointing, but it's also a year to get better, get more training and more education."

Clarke remains committed to following his super heavyweight predecessors, Anthony Joshua and Joe Joyce to Olympic success. And echoing the concern of the self-employed in wider British society, he is aware that Team GB boxers are in a more secure place, financially, than many pros.

"Yeah, I'm lucky compared to a lot of other boxers, I'm in a good position. Without fighting, the pros don't get paid. Unless you have good sponsors and even then sponsors are pulling out at the moment. I've lost sponsors in recent weeks and I fully understand where they're coming from. They're just small businesses and if there's no money coming in, there's none going out. The funding is still there for us (Team GB boxers) and that's a good thing."

The plan then is for Clarke to box his way to Olympic glory in the summer of 2021 and then turn over at the age of 30. Joyce was a similar age when he went professional after taking silver in 2016, so could the journey of the 'Juggernaut' be a template?

"He's good in a dogfight, but it would be fun. You don't want to take big shots against Joshua."@JoeJoyceBoxing tells Sky Sports about potential fights with Anthony Joshua and Tyson Fury, Olympic heartache, and creating chaos on the canvas.

"No disrespect to Joe, but we're two very different 30 year-olds. I don't act 30! I've been surrounded by kids for years in the team. I feel fresh, better than ever," he said.

Clarke clearly holds a deep respect for the two super heavies who went before him, but believes he'll prove the most talented of the trio.

"We're very different. You have the fitness machine - Joe Joyce. You have the power athlete - Joshua. But I believe I'm a better boxer than both, more of a natural boxer. I think few people around the game who've seen us box at the same stages would disagree."

And Clarke is convinced the boxing purists will follow his fortunes with great interest.

"I'll bring a different style, a different way of fighting [than Joyce and Joshua]. It'll be boxing skills, excitement all the way. Maybe I'll have to tighten up my defence in the pros, but it will be exciting. "

Clarke does not expect to make patient progress when he does eventually become a professional boxer.

"I want to be at British title level within five fights. I've been training with professionals for a long, long time, good pros like Joshua. I'm ready to do it."

Although Clarke's convinced his boxing style is very different to Joshua, he's taken a lot from the 2012 Olympic champion's single-minded commitment to the sport.

"I've seen his rise. I'm like a sponge, drinking it all in. There's no shame in that, there's things I can copy like how he lives the life. More than sparring with him, the way he conducts himself, the way he trains. People call it the amateurs, but you have to live the life like him. He goes to bed early, gets up early. I can learn from his focus."

Clarke admires Joshua's public profile and commercial success, but believes he'll have to approach the self-promotion required by professional boxing in a manner that fits his quieter personality. 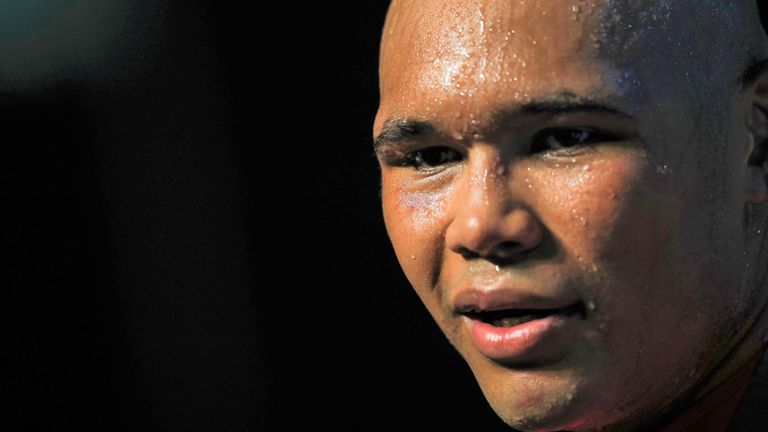 "I've got good followers already on social. But I'm a humble guy. I'm from a small place [Burton upon Trent]. We [the town] make beer. If I'm not at home, I'm usually in the local pub, playing pool. I've travelled around the world, slept on paper-thin mattresses, eaten terrible food, I'm used to camp life, I'm not going to change."

Clarke recognises the harsh realities of boxing too, having worked on the other side of the ropes in fight security. He was even called into action at Joshua's British title battle against arch-rival Dillian Whyte as the fighters' entourages jumped into the ring after round one.

"I was one of the guys in the ring, trying to chuck everyone out," he said, laughing. "But I learned a lot from different people being around the pros, learned from their experiences with the business side of things."

Clarke has revered Joshua for a long time, but since that night on December 12 2015, he's followed Dillian Whyte's career with growing respect - he's also sparred with the Brixton man.

"At one point Dillian didn't think he was going anywhere. He just straight talks and it's taken time, but he's going to be one of the big successes. I think he'll get a [world] title."

Clarke knows things can change at any moment in life and boxing. He witnessed the Westminster terror attack in March 2017, and was once stabbed three times on a night out in his hometown. The turbulent heavyweight landscape changed recently in the professional ranks as Tyson Fury topped Deontay Wilder to join Joshua as a world champion.

"Joshua showed he can box in the rematch against Andy Ruiz Jr. He put on a clinic. He wants to make a statement now against [Kubrat] Pulev. Tyson Fury really impressed versus Wilder, 100 per cent. Fury's demolition was more recent so I suppose you have to say he's just about the top guy."

Clarke is also looking forward to his old team-mate Joyce's showdown with Daniel Dubois for British and European honours. He picks Joyce to win the fight, but urges boxing fans to "believe the hype about Daniel."

"I've sparred with Daniel. Daniel's a real problem. I'm sure we'll be meeting (in the pro ranks) and I'll be ready."

Sage boxing people say timing is everything. It could be that 2021, hopefully once the pandemic has passed, will be an opportune time for Clarke to start his paid career. But, whatever the state of the heavyweight division, the 6ft 6in tall fighter is determined to make a sizeable impact.

"It'll open up. If not, I'll open it up. It won't take long for people to realise how good I am."