Becoming a boxing world champion was far from Terri Harper's thoughts when she met Jenna Hayden four years ago. They talk exclusively to Sky Sports about the strength they draw from each other

Starting with her professional debut at the Doncaster Dome in November 2017, it took Terri Harper just 10 fights to secure a major world title.

However, there was a meeting 12 months prior to that first victory as a pro which isn't on Harper's record but has its own significance in her journey towards becoming WBC super-featherweight champion.

The story of how former amateur Harper worked in a local chippy before returning to the ring to batter her opponents is the kind of down-to-earth, romantic tale that British sports fans adore. Yet it wasn't purely a passion for boxing that brought her back.

"I was going through one of my worst times when I met Jenna," says Harper, sat next to her fiancée at home in Conisbrough. "She was so supportive of me in my sport, right from the start."

By the age of 16, Harper had won three national titles and a silver medal at the European Youth Championships in Poland. Then she stopped. "I'd gotten into a serious relationship around that time, but my girlfriend back then didn't really agree with me boxing. I was still coming to terms with my sexuality.

"It meant I didn't fight again until that relationship had ended and Jenna came along, when I was 19. She inspired me to give it another go."

For those struggling, it's so helpful. Those personal interviews did that for me and gave me confidence

They grew up in neighbouring villages and connected via Facebook - "although everyone around here knows each other anyway" - while Jenna Hayden suggests an alternative version of events. "She used to watch me coming out of the hairdressers," she jokes, causing Harper to tell her off while trying not to laugh.

Each of them is full of energy and fun, something that can often be seen during Harper's fights when the cameras pan to the crowd. "It's definitely good that they're showing us both on screen on those nights. I'm not sure audiences are really used to seeing someone like Jenna jumping up and down at ringside. But it's the 21st century. Times are changing."

They are talking to Sky Sports to mark Lesbian Visibility Day. Grinning, Harper turns to Hayden. "You like showing public affection, don't you?" she teases, waiting for the parry. "Terri tells me I should be more professional while she's boxing but when I've had a few beers, that's just me," replies Jenna. The opinion of TV viewers or anyone else doesn't interest her. "It's like the Gloria Gaynor song - 'I Am What I Am'. I'm the crazy one out of us two. If you don't like it, you know where the door is."

Harper nods in agreement. "I've always said to Jen that if I ever lose fans or followers just for being gay, then so be it - it's no skin off my nose." Only briefly in her pro career to date has she felt any nervousness in public when it comes to their relationship. "I do remember a time in one of my earlier fights. I hadn't signed for Matchroom at that point, but I was on the bill for one of their shows. I'd just come out of the ring and Jenna gave me a kiss. I suddenly thought, 'oh my god, she's done that in front of thousands of people'. It was just for a moment, due to there being that bigger audience."

All that was needed was a reassurance that they were acting on instinct. "It's natural for me to kiss her and congratulate her," says Hayden. Matchroom secured Harper to a deal in September and having defeated Viviane Obenauf of Brazil a few weeks after that, the WBC belt was soon delivered with a unanimous points victory over Finland's Eva Wahlstrom in Sheffield in February. 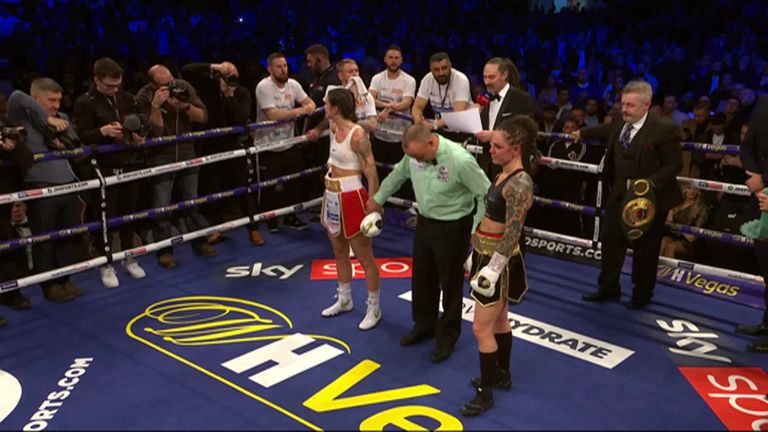 The moment Harper learned she had become a world champion

Harper should have been making the first defence of that world title this weekend, just up the road at the Doncaster Dome. As the cancellation came early into her camp, she doesn't feel too derailed by the delay. "I wasn't weeks into a fight diet or the hardest part of camp so I've seen it as a chance to do some extra training and learn more about the southpaw style. When the time comes, I'll be ready to get back in that gym and get cracking."

There have been no mind games between herself and opponent Natasha Jonas - "she's been pretty quiet" - but there is a rivalry brewing with Mikaela Mayer, which has been stirred up by the American on Twitter in recent days. Harper relishes the back-and-forth of social media and having a platform to express herself. "That personal interaction is something I really enjoy," she says. Posting punchbag videos with a humorous touch on TikTok is one outlet helping her to get through the repetition of lockdown. Sometimes she feels the need to jab back, as seen in a recent edit in which Harper's clothes switched from "my scruffs" to something slinkier.

"I'm aware that I can be very tomboyish but if I don't need to get all dressed up, I won't," she says. "I did an Instagram Live and someone wrote, 'that's not a woman, that's a man'. It didn't bother me but I wanted to make a joke about it, so I posted the video and it went really crazy. It passed a few days in quarantine anyway!"

Hayden's costume change into 'Jen Exotic' - her take on the notorious 'Tiger King' from the Netflix documentary - also went viral, and brought some light relief. She works as a supermarket manager in nearby Rossington and has spent most of the previous two days cleaning up after a break-in. "They took thousands of pounds worth of cigarettes and there was damage to the doors and shutters. It's just what you need on top of everything else going on." But with the help of Harper and others, her store was soon back in business.

Coming home, and coming out

Hayden once had big dreams for her own sporting career, as a footballer. After being scouted at a local academy, she was handed a £30,000 soccer scholarship in the US and headed over from South Yorkshire to Tennessee in the Deep South as an 18-year-old. "I had to go but I'm a very family-orientated person and it was tough to leave my parents, plus my nephew had just been born at that time. It was very religious over there, and I struggled to cope with that. They said if I didn't go to church, I couldn't play football."

Her idol was David Beckham and it wasn't just his skill on the ball that she would try to replicate. "I walked in there with a mohawk, shaved both sides - everyone used to just call me Becks." That sense of not fitting in and the homesickness meant she lasted only six months. "I emailed my dad and said, 'get me a flight home, I can't do it anymore.'"

After returning, she signed for Doncaster Belles, earning around £20 a week as a semi-professional. "I mostly played centre midfield but sometimes as a striker or right winger, because I was short and fast." The team became Doncaster Rovers Belles in 2003 after a merger; Hayden's team-mates included England greats like Karen Walker and Vicki Exley. "You felt welcome in their company. I miss those days. Most of us were gay on my team so you never felt pushed to one side or uptight about that. My dad would say that's why I was gay, 'because you played football with them lesbians'. But it wasn't that - if I played tennis, I'd still be who I am."

She's quick to stress that it's "totally different now" in terms of acceptance, from her father and everyone else close to her. "He was old-fashioned back then and didn't really know anything about it. I came out to him one Sunday afternoon and it didn't sink in well. I packed my bag and went to my sister's and she was like, 'what's up?' When I told her I was gay, she said she already knew. I asked her 'well, why didn't you tell me?!'

"I just needed to hear I was loved. Back then, you wouldn't see two women holding hands, let alone men."

Harper remembers struggling to find a good way to come out when she was 14. "I wrote a letter and left it on my dad and my step mum's bed. I tried to go to sleep but I couldn't, so I went and grabbed it back. Later I messaged my dad and said, 'I've got something to tell you' and when he asked what was wrong, I told him I was gay. He replied with 'I'm just glad you've not told me you're pregnant!'"

The reaction came as a relief and in time, it became easier to talk about with family. "My nan took a bit of time to come to terms with it - I reckon she still thinks I'm going through a phase - but everyone was really good with me."

Watching YouTube videos of other people sharing their experiences of coming out helped Harper as she was struggling with her own sexuality. She'd like to see more of those stories in sport. "Athletes getting that type of content out there for those struggling is so helpful. Those personal interviews did that for me and gave me confidence.

"When I first turned pro and was getting my shorts designed, I made sure I had a little rainbow design on there, just to show I'm proud. It helped me to be comfortable with who I was, so that's something I want to be able to do for any younger ones who are struggling."

These days, self-confidence is a crucial part of Harper's armour. Her ultimate quest is to take on the queen of the fight world - Katie Taylor. "She's the best out there so all roads lead to her. Hopefully one day, if I don't mess up along the way, I can get to share a ring with her."

Having achieved so much in boxing in a relatively short space of time, Harper deserves to feel proud - and with her biggest supporter and pillar of strength cheering her on, there's plenty more to achieve. Could Hayden have also hit the heights in British sport, if she'd stuck it out longer in the States? "I do miss football, but also I believe everything happens for a reason," she says. "If I'd stayed, I might not have met Terri. I'm glad I came back."