An internal struggle, a fight for recognition, and a battle with depression - Emma Collings-Barnes has come through them all. In Lesbian Visibility Week, the elite swimming coach explains how she found pride through sport

Emma Collings-Barnes is the Director of Swimming at Mount Kelly.

The Devon school's program is one of the most successful in the country, having produced over 80 international athletes, with many competing at Olympic and Paralympic level. As a young athlete herself, she represented Great Britain in 5000m Open Water Swimming before moving into coaching.

I live my best life because of swimming, and facing the challenges that being a female coach presents.

I live my best life because I'm a lesbian, which brings its own challenges in society.

And I live my best life for my best friend Katie.

As a young athlete, I felt defined by swimming and my sexuality. However, I was deeply in the closet which meant that when I retired from competition, I felt a huge void. 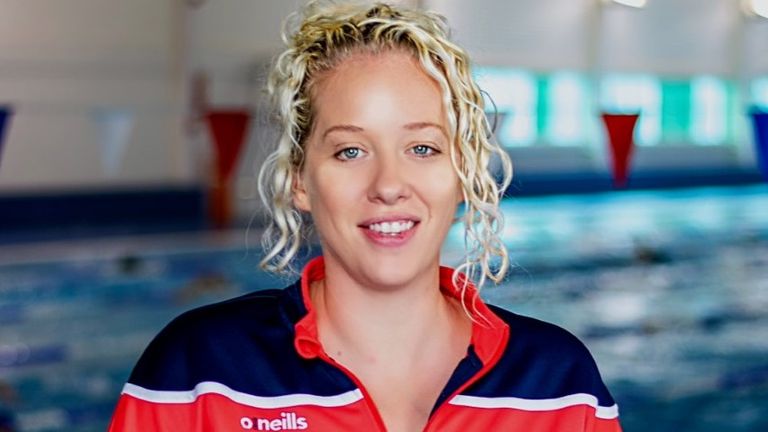 The world is becoming more accepting but there are still certain stigmas attached to LGBT+ athletes and the sports they play.

I considered going into physiotherapy, but due to that ongoing struggle with myself, I chose coaching. The thought of having a positive effect on the lives of others was exciting to me.

I now lead one of the best programs in the country with 150 swimmers and eight coaches - but getting here has been a battle, both internal and external.

That battle has made me a better coach. I'm now more patient, level-headed, and understanding. In recent years, I've had my first real success at elite level, with Federico Burdisso becoming the youngest male in history to win a medal at the European Championships. He claimed 200m butterfly bronze in Glasgow in 2018 when still aged 16; last year, he was fourth at the World Championships in Gwangju.

As I look back, I can see sport has been the vehicle for my own journey into self-acceptance. Without it, I fear the happiness I feel now, in a wonderful job and a very happy marriage, would never have happened for me.

Breaking down the stigma

It was always clear to me that I cared much more about other people than I did for myself. This is reflected not only in my chosen profession of coaching but also in how long it took me to come out to family, friends and others.

Growing up in my sport, there were no out lesbian role models - no one to say everything would be OK. If there had been, I may have started living my truth earlier.

After I retired in 2006, one of my first coaching jobs was at a prestigious private school. I was petrified that my employer would find out I was a lesbian, but being a woman was enough of a challenge in itself. Female coaches were widely discredited in swimming and those that were tough enough to ignore the 'boys club' sexism had to fight for recognition.

I remember getting invited to sit down with a man who was considered one of the best coaches in the world. I was only 22, and naturally thrilled at the opportunity. I listened to a male chauvinist who made his beliefs clear - that "women had no place on poolside" and that in his experience, female athletes were "mentally too weak" to emulate the achievements of their male counterparts.

Smutty remarks and gossip held me back from accepting myself and I feared that others learning about my sexuality could end my career early on. I decided to focus on trying to break down the stigma around female coaches, and my reputation began to grow with talented young male swimmers coming through. However, my own happiness was fading.

After five years there, I'd had enough of my ambitions being suppressed by strong male figures that were threatened by a 'bolshy' northern girl, and the fear of getting fired if I came out. I felt I needed to prove my worth in the swimming community by leading my own program.

I moved to Aldershot but the 18 months I spent coaching there proved to be some of the worst of my life. It wasn't the club I coached - I just felt I could never be truly happy. I wanted to fight one battle at a time but if swimming was still struggling to accept female coaches, how on earth would I be accepted as an out gay woman and be successful? I needed to move away, to a different environment where no one knew me, and start again.

I took a step back from leading a program and took a position as an assistant coach at Kelly College in Devon. It gave me time to reflect. Maybe I shouldn't care what other people think? Putting their happiness first hadn't worked out well for me. Surely no one here would care I'm a lesbian. I had to have faith that what mattered was me being a great coach with a lot to offer.

I soon realised that this school was different - friendly, kind, supportive, non-judgemental. I finally felt strong enough to start my new life as exactly who I am - a woman with a passion for coaching, and a lesbian.

What ensued was online trolling and vicious, ignorant comments from some of the parents about my sexuality. I received messages saying I wasn't fit to work with kids. Some parents even went as far as going to the headmaster calling for me to be fired. But to my surprise, my employer told them where to go - and for the first time in my life, I felt supported, protected, and accepted.

The weight of all those negative experiences I'd been through instantly fell away. All I'd needed was validation - not from friends (I knew I was loved) but from someone in my professional career. Just for them to say - what has being a lesbian got to do with how you coach?

My enjoyment returned. I was coaching better and became ambitious again. By 2015, I was out to the world and ready to aim high.

Then I met Amy. I'd never met anyone that made me feel more like a superhero. I was proud - proud to be a lesbian, proud to have her by my side and for the first time, I felt lucky. Amy was the final piece in my jigsaw. The world had changed a little. There was more acceptance; more visible LGBT role models in sport were emerging, and I'd met the love of my life. I also had a coaching platform that supported me.

That summer, tragedy hit. It was a Friday in June. My best friend Katie died in a car crash. She was only 33. Katie had been by my side through all my ups and downs - she was the only person to see the real me since I was 18. I fell into a deep depression. It was the darkest time of my life.

Through it all, Amy was amazing - calm, patient, and loving. It took me about a year to get back on my feet. I realised I owed it to Katie to be proud and to love myself unconditionally. I needed to be the very best version of myself until the day I died.

Now, in 2020, it matters to me to be visible and confident about being LGBT+, both here at school and in the wider swimming community. I want to help young people who are also LGBT+ understand that they're so much more than that - musicians, mathematicians, and of course, sportsmen and sportswomen. It's important to live your truth always.

The parents who once opposed me are consigned to the past - and now, I'm not the only out gay coach at Mount Kelly either. Our headmaster is fully supportive of myself and my team, who I feel lucky to have around me. This positive shift extends to our governing bodies too. Swim England and British Swimming are very inclusive and have worked particularly hard to change the stigma around female coaches.

I try to promote a safe environment within my own program where we live by our values and respect each other's differences, whether that's interests, culture, opinions, sexuality, or gender. I'm really proud of this. The team spirit we've created as a by-product is evident and seen all around the country by those in swimming.

Some challenges remain. The world is becoming more accepting but there are still certain stigmas attached to LGBT+ athletes and the sports they play. For many, the coming out process is therapeutic and about acceptance. Saying 'who cares?' may be well-meant but it can make an LGBT+ person in sport feel like their coach or governing body is not listening to them. It threatens to belittle what they are feeling and thinking.

World-class coaching is about understanding that athletes are people - getting to know them adds layers onto the level at which you can coach. We must be patient and allow for different coping strategies and personalities - validate, acknowledge, and move on to making that individual the best athlete they can be.

I still feel there aren't enough lesbian role models in swimming specifically. I don't know why that is. There are times when I get judged. However, I now feel strong enough to lead others through any hurt and upset and turn that into passion and pride.

Inclusion in sport teaches life lessons. The experience we've created at Mount Kelly stands apart in the values and attitudes of its young men and women - compassion, integrity, generosity of spirit, and commitment.

Fear must never be something an LGBT+ person feels when taking up their sporting passion. Only when we foster truly inclusive environments does that fear disappear - and the more we create, the greater the standard of sport we will produce in this country.