"I’m way more precise than him as well as a much smarter boxer. And I will beat him. Brutally"

Kubrat Pulev has labelled Anthony Joshua "afraid" and a "coward" – and promised to destroy his hopes of an undisputed title fight with Tyson Fury.

Mandatory challenger Pulev is contracted to be Joshua's next opponent in an IBF, WBA and WBO heavyweight title defence while Deontay Wilder has the right to enforce a third WBC title fight against Fury.

Overseas territories including Saudi Arabia have enquired about hosting a future undisputed title fight between Joshua and Fury, but Pulev insists he will bring those plans crashing down…

You have more experience than Joshua - do you have better ring skills?

Pulev said: I'm way more precise than him as well as a much smarter boxer. And I will beat him. Brutally.

Why do you think Joshua wants home advantage for his fight against you?

Pulev said: I think it is obvious - because he's afraid. I don't see any other reason.

Why should it be in London? Why the fight can't take place in any other place? You answer this!

We offered various destinations - from Istanbul to Las Vegas, New York or Saudi Arabia. And then I got the reply that Joshua would come up against me only in London. Otherwise there would be no fight at all. And of course, I agreed to this condition.

I'm not concerned about the place. For example, I never asked for the fight to be in Sofia. From day one I wanted it to take place at a neutral venue as this would be fair to both sides.

What would be this fight's perfect location for you?

Pulev said: There's no such thing as an ideal location for a true fighter. He can fight everywhere and he's not worried about anything.

Picking a certain destination is for cowards. For those who prefer to talk a lot rather than act.

I can think of at least two others who fit this description and who have refused to come to Sofia to face me - Dillian Whyte and Jarrell Miller. 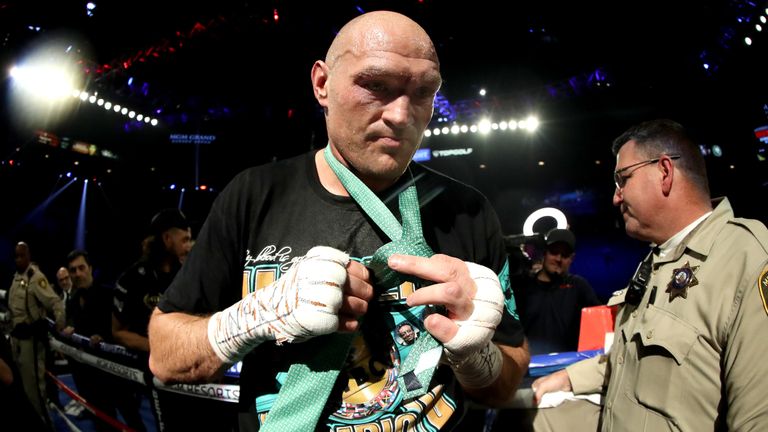 'Foreign host offers but no AJ-Fury talks yet'

Joshua wants an undisputed world title fight with Tyson Fury - will you ruin these plans?

Pulev said: He can't face Fury because he has signed a contract to fight me. Besides, in this same contract there are clauses featuring some serious compensations [if the fight doesn't happen]. In the meantime, Fury has a contract for a third fight with Deontay Wilder. Neither me, nor Wilder will give up on these fights.

Britain holds all the world heavyweight titles - will you end this dominance?

Pulev said: Yes. And I'm more than convinced that I'm capable of doing it. No matter how much Eddie Hearn tries to manoeuvre things and play his little games, I will come up against Joshua and I will beat him! It's written in the stars.

Do you think Joshua has recovered mentally from his defeat to Andy Ruiz Jr?

Pulev said: No, I don't think so. Mentality is something you were born with, you have it inside you.

Also, being mentally strong is a skill you have to work on from a very young age. It all begins with the family a kid grows up in and then you strengthen your mentality as an adult.

Joshua's mentality, meanwhile, is a whole lot different and it was just a matter of time for him to lose.

If you had fought Joshua in October 2017, when you withdrew injured and were replaced by Carlos Takam, would you have been the first man to beat him?

Pulev said: Certainly. To be honest, I'm a bit upset that I didn't get the chance to face him back then. Unfortunately, I was recovering from an injury which stopped me from fighting him. That was God's will. Now the time has finally come and I'm stronger - this way my victory will be even sweeter.

Promoter Bob Arum has predicted a KO win for you - do you expect that outcome?

Pulev said: Bob is an amazing guy. He's so experienced, he has seen so many things in the world of boxing, he knows so much. He's a guy you can never mislead. In this case he's not wrong either and I'm full of ambition to prove him right and meet his expectations in the best way possible.

Are you afraid that the coronavirus pandemic will have a serious impact on your clash with Joshua?

Pulev said: I don't have such concerns. Even if the fight has to take place behind closed doors, it will still be a very interesting event. Yes, we had to postpone it a bit but I don't think that it will take too long before we meet in the ring.

We have a signed contract which is the reason I strongly believe there will be a fight before the end of the year. I'm more than certain it will be an exciting clash that will show the world who's the better boxer.

What did you think of Fury's win over Wilder?

Pulev said: Wilder wasn't on his usual mental level. That wasn't the Wilder we all know. What's the reason for that? He's the only one who knows it. I'm just saying that in this fight he wasn't the boxer we were used to seeing in the ring.

Could you fight Fury instead of Joshua?

Pulev said: I'm looking forward to a Fury fight as well. Having said that, I'll be happy to face him after I beat Joshua. Fighting with Fury would be a great challenge for me and it would also bring me a great amount of pleasure.

Who do you think is the world's No 1 heavyweight?

There still isn't one who is the best. All in the top 10 are good boxers but the best one is yet to be decided. That's precisely the reason why heavyweight boxing is currently so interesting and unpredictable. But there will be a best one - very, very soon…