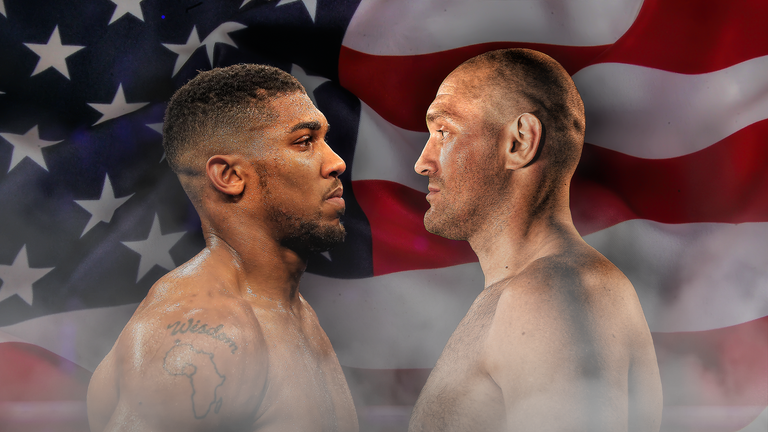 A blockbuster heavyweight battle between Joshua and Fury, Britain's two world champions, continues to be discussed, with promoter Eddie Hearn revealing that initial offers have been made to stage the undisputed title fight this year.

Formal negotiations are yet to start and promotional company, Top Rank, who are influential in guiding the career of Fury, believe the Brit must still fulfil a contracted third fight with Deontay Wilder, while Joshua is due to defend his titles against Kubrat Pulev, his mandatory challenger.

"It's just chatter, in my opinion," DuBoef told Sky Sports. "I think inherently the objective for everybody is to live up to the commitments that they both have, and keep it simple, and if they both get past those, let's go ahead and do it.

"If that was early 2021, that's great, but I think that's what the circumstances were, where the chatter started coming back, is because of this pause in events."

Top Rank also represent Pulev, who this week insisted he would not step aside to allow Joshua-Fury to happen, and his manager Ivaylo Gotsev has even suggested staging the fight for the WBA, IBF and WBO belts at a Roman amphitheatre in Croatia.

This is the venue suggested by Kubrat Pulev's manager for the Anthony Joshua fight!

"The easiest scenario for all of us to get to - is let Joshua hopefully, if he can get past Pulev, who is going to be a tough mandatory fight for him, and let's have Tyson get in the ring back with Wilder, and then sets up the semi-finals for the finals," said DuBoef. "For the big Super Bowl, the big UEFA championship match between Joshua and Fury.

"That to me is the cleanest way and probably the easiest way, where everybody lives up to their commitments. That would be obviously the preference, in order of bouts, in the most simple way."

Pulev's manager, Ivaylo Gotsev, has reiterated the Bulgarian's unwillingness to accept a step aside deal, which might allow the Joshua-Fury fight.

Asked if Joshua must fulfil his IBF mandatory fight, Gotsev told Sky Sports: "Absolutely. That's the only thing he can do really, unless he wants to go against agreements that were made.

"We expect him to do the right thing. He's a proud young man, he's newly crowned again, so show your worth.

"It's one thing to go out there and say, 'I'm going to walk through Kubrat Pulev,' well, try to do that then. Not in words, step up like a man and deliver on your promises right. If he can walk through a wall, he'll walk through Pulev, but chances are, he might crash into that wall."

Saudi Arabia, the location for Joshua's rematch win over Andy Ruiz Jr, has reportedly been put forward as a potential venue for the Brit rivals, although DuBoef believes that Fury could remain in the US, particularly after the financial success of his rematch with Wilder.

"I think that the success of the big events, the biggest events in the history of combat sports, have originated from America," he said.

"I keep going back to that. I think the impact and the success of a PPV being distributed from the United States to the late hours, or early hours let's call it in the UK - we've seen that be very successful and the fans are connected and will stay up.

"My heart of hearts tells me that would be the ideal place, but obviously we would be open to any site and any prospective dynamic that would be different.

"To do a fight in the UK would be fantastic. Both guys are larger than life and to sync that up with the United States. But as we just said, if it was the old world, we just did under $17m with Fury and Wilder and I'm not sure there was a gate in the UK that's done that.

"I'll think we'd have to weigh all the different circumstances and if there was outside locations, like Saudi Arabia, Qatar, Asia, whatever, we would obviously weigh those too."

Watch 'The Boxing Show' on Sky Sports News at 2pm on Friday.