Mike Tyson's teased comeback is 'not something' for Eddie Hearn, says the promoter

"If it keeps him happy then why not keep training?" 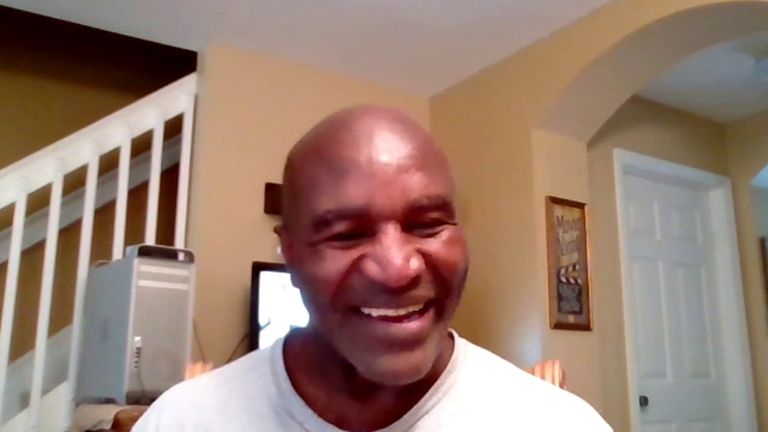 Holyfield vs Tyson III? Veteran heavyweights, in their 50s, could meet in charity exhibition, says Holyfield

Tyson, aged 53, has looked explosive in social media training footage and his old rival Evander Holyfield told Sky Sports News that another meeting in the ring was up for discussion.

Hearn told Sky Sports: "We all know my head can be turned for a few quid! You saw my KSI vs Logan Paul fight which I got stick for, but it was a roaring success and I really enjoyed it. It taught me a lot.

My 1st week back in the gym and I feel great. I'm looking forward to stepping up my training sessions and intensity as I prepare for my fight. I told you I had something for you🥊 @reneeyoungwwe @bookertfivex @themarkhenry @wwe @wweonfox @foxsports

"Imagine if I said: 'Mike Tyson is returning to the ring and I will promote him!'

"The stick I'd get would be unbelievable. It's not something I'm looking to do.

"I expect him to come back in some sort of exhibition, or something like that. Is that good or enjoyable? I suppose it's intriguing.

"Tyson looked fantastic on the pads but he's 53. Look at his last fight against Kevin McBride. He won't be able to compete at [a high level].

"It's good to see him training. He's in great shape. If it keeps him happy then why not keep training? I wouldn't like to see him fight in the ring professionally."

Holyfield, who twice beat Tyson in their heyday including once via notorious disqualification when his ear was bitten, has suggested they could meet again in an exhibition contest.

"I wouldn't ask nobody to do anything they don't want to do. But it's for charity," the 57-year-old told Sky Sports News.

"If we can work something out that works for everybody then it's a win-win-win."

You know the original story about Mike Tyson and Mitch 'Blood' Green... but you don't know THIS tale of spilled blood

Why 50-year-old heavyweights are a bad idea

Like 'Iron' Mike Tyson today, Donovan 'Razor' Ruddock was saying all the right things. He had re-found his hunger, gone vegan and was desperate to prove that he felt stronger in his 50s than he had in his 20s.

Razor, so-called for his punches that split opponents' skin, did what Tyson and co are currently threatening to do by launching a comeback into the heavyweight division five years ago as a 51-year-old. It ended disastrously in a resounding KO defeat to a rival 22 years his junior.