"I don't think Andy has the time to mature. I think he has to change now"

Chris Arreola was drinking beers and dodging training, long before Andy Ruiz Jr aired his regrets, but 'The Nightmare' told Sky Sports why he is short on sympathy for the fallen champion.

Ruiz Jr offered a rueful apology to coach Manny Robles after handing his world titles back to Anthony Joshua.

Robles gritted his teeth in the glare of the watching media as Ruiz Jr reeled off reasons for showing up overweight and underprepared for a one-sided points loss in Saudi Arabia.

"I don't want to say that three months of partying, celebrating affected me. To tell you the truth, it kind of did, but what can I say."

Arreola had heard these excuses before, only from his own mouth. A fellow Californian heavyweight, with the same Mexican heritage, he knew all about fighting his way out of hardship.

But did he feel sorry for Ruiz Jr?

Arreola said: "Absolutely not. I respect him and I would have probably been doing the same thing.

"Sometimes I don't think he gives us the best chance to win," former trainer Henry Ramirez once lamented about Arreola. "Sometimes he comes in a little too far out of shape."

Arreola has two 'no decisions' on his record after victories were chalked off following positive tests for marijuana. Even when he did head off to training, sometimes he did not complete the trip.

"I was drinking Corona, I was partying. I would show up whenever I wanted to show up to the gym.

"I would come up with excuses on the way to the gym. I would say that my car needs an oil change. I need new tyres. You know there's always an excuse. Like I said, it comes from having nothing and then having everything."

Arreola received a moment of brutal recognition after striding past Hollywood star Arnold Schwarzenegger and basketball heroes on his way to a WBC heavyweight title fight with Vitali Klitschko.

He had made it. Time to hit hard and party harder, but it did not work out that way.

Ruiz Jr had cried too, just a few hours after his Madison Square Garden triumph over Joshua. A multi-million-dollar rematch was already being discussed and he joyously told his mother, 'we don't have to struggle no more.'

Except that was the problem, according to Arreola, who was beaten by Bermane Stiverne and Deontay Wilder in two other WBC title fights.

Ruiz Jr's 'Rocky' story had perhaps peaked on that night in New York and Arreola fittingly quotes a scene from the film, when asked for his advice. 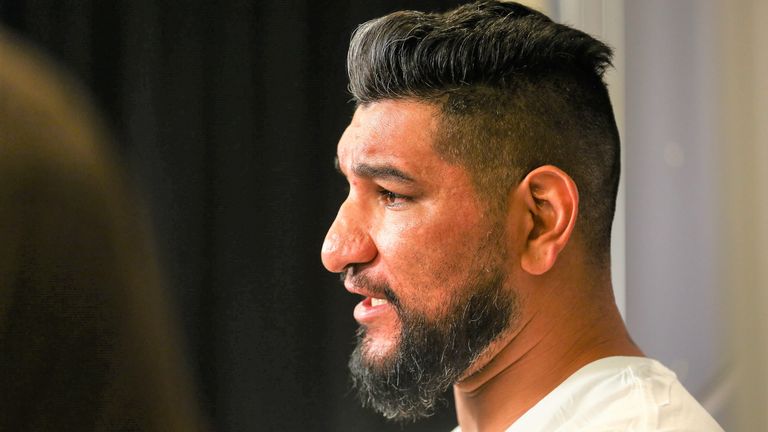 The worst downfall to a boxer is to be civilised.

"The worst downfall to a boxer is to be civilised.

"It's funny. It could be from Rocky, but that's true. Once you become civilised, that's a bad thing. You lose your hunger. You lose the will to fight."

Arreola might soon deliver those words in person, with talks ongoing for him to fight Ruiz Jr later this year.

The duo have traded blows before when a 17-year-old Ruiz Jr showed up at Arreola's gym, bravely offering his services for sparring. Any initial attempts to take it easy on the teen were soon forgotten as Ruiz Jr revealed his blurring speed.

"This kid, not only was he big, but he was big with fast hands. A lot of power behind his punches, and I knew that this kid was going to be a heavyweight to be reckoned with in the future, and here we are now. We might even be meeting one another in the ring with 10 ounce gloves."

Low impact pool workout 💯 Gotta mix it up. Road work is important but mixing in these swimming drills are equally valuable. Less stress on his body 🏊‍♂️🏊‍♂️

Ruiz Jr has posted promising updates of his fitness regime on social media as he awaits confirmation of his next career move.

"The most important thing, for me, is that he finds love for boxing again," Capetillo said. "Then we can see again the Andy Ruiz Jr who shocked the world. He has a lot of potential and a lot of skill.

"But he needs to feel passion again for his work."

Arreola insists warm words of encouragement are no longer needed and intends to deliver his own painful teachings to Ruiz Jr, if they share the ring.

"I don't think Andy has the time to mature. I think he has to change now.

"A little maturity and a whole lot of humble."