Anthony Joshua would have faced Hughie Fury in a unification fight, if Tyson Fury's cousin had not received a "cruel" defeat in a WBO title fight with Joseph Parker in 2017, says promoter Mick Hennessy

Tyson Fury was at the centre of a furious outburst as the cruellest night of his cousin Hughie's career ruined plans for a unification fight with Anthony Joshua.

Joshua had just announced himself as the new ruler of the heavyweight division, having toppled Wladimir Klitschko at Wembley to add the WBA belt to his IBF title.

What's next? A recurring question for Britain's new star, even back then, and belt holders in the past and present were being scrutinised as likely rivals.

Tyson Fury had lost all his titles and added alarming weight during a worrying exile from the ring and he would be a passionate spectator as Hughie sought to bring the WBO belt back to the family.

"We could have picked the right fights for him and the AJ fight could have come about when the time was right," promoter Mick Hennessy told Sky Sports, while reflecting on a points verdict that provoked a raw post-fight reaction from him.

It was Hughie, not Tyson, that was being talked about as a future opponent for Joshua, if the 23-year-old could overcome WBO champion Joseph Parker in September 2017.

Father and trainer Peter Fury felt it was Hughie's turn to prove himself, just under two years after he had guided Tyson to a world title triumph over Klitschko.

"He's ready to face these kind of fights and there's no reason why they can't happen," Peter Fury told Sky Sports News. "He'd be the most technically proficient fighter Joshua has faced by a mile."

Hennessy had a promotional plan laid out for his unbeaten young contender, which would have given him time to adjust to his new status as a world champion before taking a lucrative showdown against Joshua, with three belts at stake.

"Where his confidence was going and what that fight would have done for him, if he was given the right decision, he wouldn't have been that far off an AJ fight."

But the younger Fury has remained on the edges of the grandest heavyweight stage ever since.

A dispute about a 'neutral referee' had spilled over in a bad-tempered press conference, although it was the judges who would come under scrutiny after the fight.

Parker's fist was raised following 12 rounds, much to the dismay of Hughie's team, with one supporter even ripping the belt away from the celebrating Kiwi.

Two score totals of 118-110 were gratefully received by Parker, although the third tally of 114-114 was a closer indication of a fight that many at ringside felt had been dictated by Fury.

"I was a little bit nervous after the first card and then very massively relieved when the final card came through," Parker's promoter David Higgins had told Sky Sports after the scores were announced.

"I thought Joseph won a close fight, because he put the pressure on and was more active coming forward and we thought that some of Fury's punches maybe shouldn't have been scored, or whatever."

Hennessy was outraged, uttering words of disbelief, 'Can someone tell me what's going on?'

"You've seen my reaction. I couldn't believe it. Sometimes you have to sit ringside to see a fight.

Parker retained his WBO belt, despite an appeal to the governing body by Hennessy, and would battle Joshua at the Millennium Stadium, suffering a unanimous decision loss that ended his reign.

For Hughie, there was harsh disappointment and bloody defeat.

A world title fight with Joshua was in touching distance again, only for Hughie to be hampered by a gaping cut during a points loss to Kubrat Pulev in an IBF final eliminator in Bulgaria.

Another decision defeat, this time to Alexander Povetkin, forced Fury and father Peter to rebuild his belief and technique. 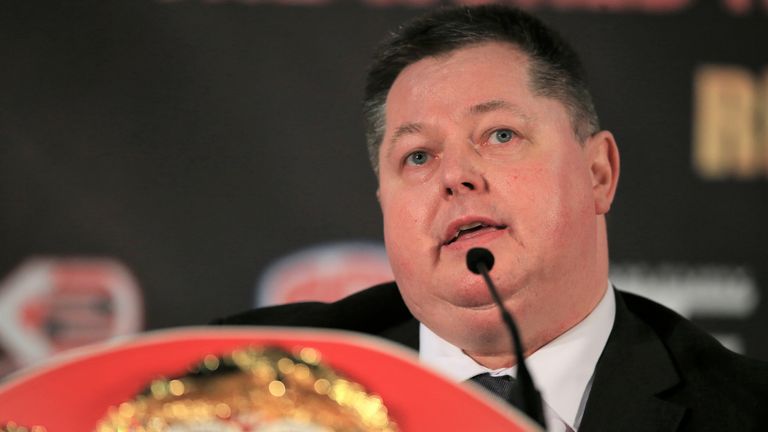 If he had become world champion, like he deserved, I think everything would have gone to another level very quickly.

"This is how cruel life can be sometimes. He won that fight," said Hennessy.

"To me, that was crazy. If he had become world champion, like he deserved, I think everything would have gone to another level very quickly. His confidence, everything.

Joshua and Tyson Fury are seemingly set to share the ring this year, in one of the most significant heavyweight fights in the sport's history, with the winner becoming undisputed world champion.

Belts could then be scattered in the future, amid conflicting orders from governing bodies, and contenders like Hughie Fury could receive another title shot, years after missing out on Joshua.

"I think you would have seen something special if that would have happened, because Hughie's confidence levels would have gone through the roof," said Hennessy.

"He would have relaxed that he had reached his goal, which he wants so bad.

"He's just waiting in the wings. Belts are going to become available at some time and Hughie will definitely become world champion.

"I've always said it, and he will become a heavyweight world champion."