Tyson Fury and Deontay Wilder knew what was coming, five years before a thunderous exchange of punches, and they forced smiles for the cameras after whispering spiteful promises.

Wilder was back in Britain, a few months after ending Audley Harrison's lingering ambitions in Sheffield with a savage victory in 2013.

Fury had ventured onto the American's territory that same year, clubbing Steve Cunningham into submission after an early scare in New York.

Both were unbeaten, both were combustible, and both would be ushered towards a tense confrontation.

David Haye was the looming threat to Fury, with a British heavyweight battle set for September, and Wilder had been summoned to south London to spar with the former WBA champion.

Richard Towers, another of Haye's sparring partners, had forged a friendship with Wilder and told Sky Sports about how the Alabama man accepted the invitation that led to a face-off with Fury.

Wilder and Towers were offered tickets to a boxing bill in Rotherham - and Fury was waiting.

"Deontay was staying at my house, we got invited to the show," said Towers.

Hughie Fury, cousin of Tyson, Chris Eubank Jr and Kid Galahad were on the running order at the Magna Centre, but Wilder's arrival gained the glare of the media.

"Deontay was doing an interview with cameras, Tyson Fury walked past and went, 'One day, one day!'

"You could see Tyson was smiling. Deontay takes things seriously.

"Deontay said: 'Yo Richard man, this guy wants to watch himself'.

"I was like, 'Forget all that, it's just to build the process'."

Sky Sports expert Johnny Nelson was also in attendance and revealed how Fury and Wilder had set the scene for an inevitable showdown.

"I can remember it distinctly because my ex-wife was flirting with Deontay at the time," Nelson told Sky Sports.

"Those two got in the ring. It was cordial. They were basically saying, 'We'll fight each other, our time will come'. A bit of back and forth between them.

"It wasn't nasty, but it was the beginning of something. There was a bit of tension there.

"I thought, yeah cool, I can see this happening.

"They knew they would share the ring. They actually said, 'We'll fight one day', the crowd loved it."

Despite firm handshakes and a few words of respect, Wilder was already sizing up Fury as a future recipient of his freakish power.

"Deontay had always said to me, 'Tyson Fury looks like he's making waves and he's unbeaten. I can't wait to fight that guy, I'll knock him out'," recalled Towers.

Fury and Wilder had another fiery exchange in New York

This promise was so nearly fulfilled in their first fight when Fury was sent crashing to the canvas, only to miraculously beat the count, and both settled for a split-decision draw.

Wilder had previously told Towers about how he lulls and lures in an unwitting opponent.

"I ain't got that experience, so I had to make up with it from something else, that's the power.

"And that's what he believes. He's done it, and he's done it time and time again." 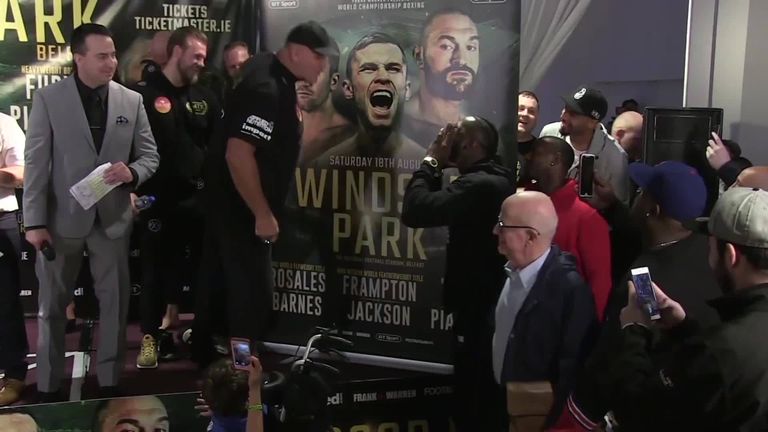 Fury's father John clashed with Wilder at a weigh-in

Wilder's destructive WBC title reign was ended in February, with Fury becoming the destroyer, inflicting a beating on the fighter he had taunted and teased in Yorkshire.

This double act appears unlikely to meet again, despite an ongoing dispute over a third fight, as Fury was angered by wild claims and conspiracy theories from the fallen champion's camp.

Towers still exchanges messages of goodwill with Wilder, long after they playfully sparred in his kitchen.

The Sheffield heavyweight, a product of Brendan Ingle's famed gym, now trains his own fighters, including amateur starlet Christopher Luteke.

"Brendan used to say, 'Listen to me carefully, you're as good as your last fight', and I didn't understand. I thought I would figure it out as time goes on.

"I only realise now, seeing how people just discredit fighters, just are disrespectful to fighters."

Wilder can drown out the derision with a reminder of his threat when he makes an expected return this year.

He perhaps did not know what he was walking into, on a raucous evening with his British rival, but maybe it is time to move on from Fury.