Floyd Mayweather vs Logan Paul is on Sunday at midnight, live on Sky Sports Box Office 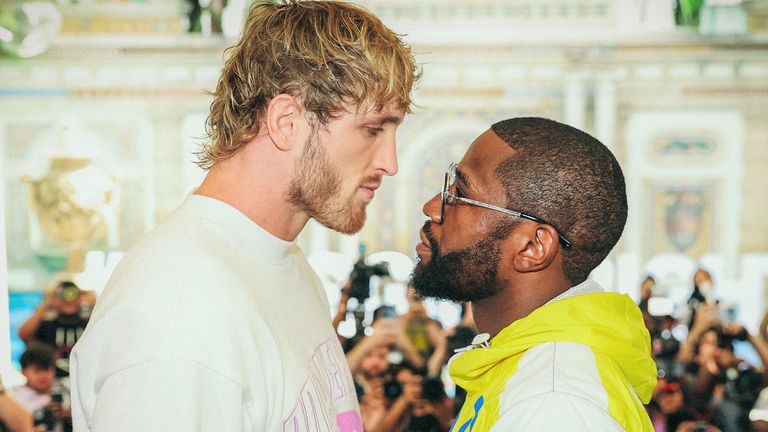 Floyd Mayweather spiced up his rivalry with Logan Paul by refusing to conclude a long and steely face-off on Thursday night.

Mayweather had been left angered after having his hat stolen by his opponent's brother, Jake Paul, at their previous meeting, and on this occasion was in no mood for "disrespect".

Logan Paul towered above Mayweather during a long and tense face-off when they crossed paths on Thursday at a red carpet event in Miami.

When the YouTube phenomenon tried to step away, Mayweather took a step closer to prolong the animosity.

Logan Paul was substantially taller and has said that weigh-in rules stipulate he can weigh 190lbs, while Mayweather will be 30lbs lighter.

The glove size has also been reduced from 12oz to 10oz.

Knockouts are permitted in this exhibition bout but there will be no judges.

"There is a difference between YouTube boxing and elite boxing - you guys will see the difference," said Mayweather, the 44-year-old who retired with a perfect 50-0 record in 2017.

"I have a trained a little bit, here and there, not every day. But I don't have to."

He lashed out at his former rivals: "The 'so-called' top fighters, like Manny Pacquiao? He has to fight. I don't have to. I do what I want to do. I retired.

"Am I proud of Pacquiao? Absolutely. But he has to fight.

"I made smart investments to put myself in the position where I don't have to fight anymore."