Anthony Joshua fight may be finalised this week, says Oleksandr Usyk's promoter: 'Most of the issues have been agreed'

"Oleksandr Usyk is so thirsty to become the champ at heavyweight - then proceed to travelling to Mars after he collects all the belts!" | Anthony Joshua's next fight targeted for September at Tottenham Hotspur Stadium 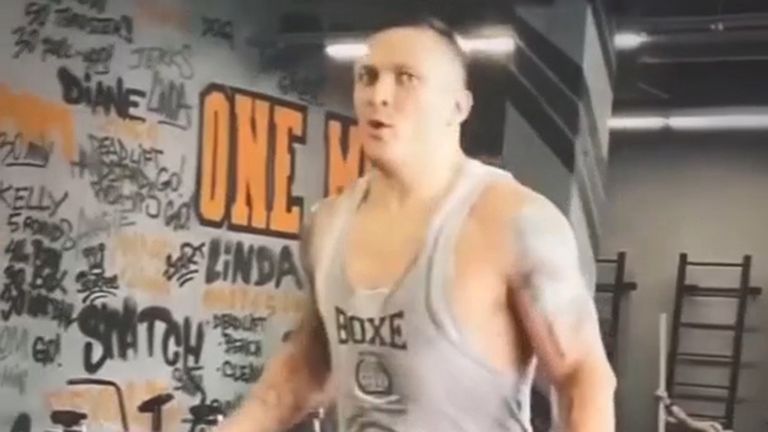 Oleksandr Usyk started the mind games ahead of his fight with Anthony Joshua by sending him this friendly message...

Anthony Joshua's world heavyweight title defence against Oleksandr Usyk could be finalised in the coming days – the challenger's "confidence is at sky level", his promoter said.

Joshua's next fight is targeted for September at the 62,000-seat Tottenham Hotspur Stadium.

Usyk, the undefeated southpaw from Ukraine, is his WBO mandatory challenger and the governing body ordered him to be Joshua's next opponent after the breakdown of the Tyson Fury clash.

"We hope that we will sign the contract by the end of the week," Usyk's promoter Alexander Krassyuk told Sky Sports.

"Most of the issues have been coordinated and agreed.

"Usyk's confidence is at sky level."

Krassyuk joked: "He is so thirsty to become the champ at heavyweight - then proceed to travelling to Mars after he collects all the belts!"

Usyk shouted via social media: "Hey Anthony, how are you?"

Joshua and Usyk each took gold medals home from the 2012 Olympics. Usyk has since become the undisputed cruiserweight champion and has stepped up to heavyweight, where he outpointed Derek Chisora.

Joshua was ringside when Usyk remained undefeated against Chisora.

"There are no visible obstacles to the deal not to take place," Krassyuk previously said.

Joshua's promoter Eddie Hearn previously told Behind The Gloves about Usyk: "It is the fight that is most likely for us.

"We are talking to other people, as well, about other fights.

"The aim is to be undisputed. All AJ has done is to box off mandatory fights to keep the belt. How much longer does he have to do that?"