Freddie Roach also says of a prospective contest between Manny Pacquiao and Josh Taylor: "That fight can happen!"; Pacquiao returns to the ring against Yordenis Ugas on Sunday morning from 2am, live on Sky Sports 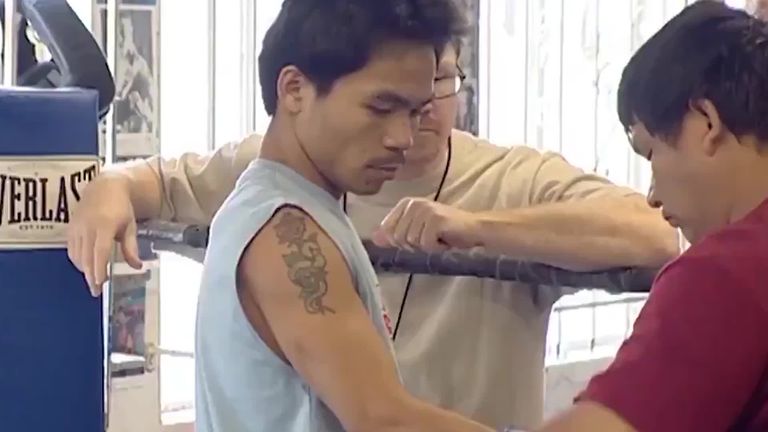 Pacquiao will fight Yordenis Ugas for the WBA 'super' welterweight title on Sunday morning from 2am, live on Sky Sports.

Aged 42, the legendary Filipino remains at the summit of boxing and has not given up hope of luring Mayweather, who is retired aged 44, back into the ring.

"We would like to fight Mayweather one more time," Pacquiao's Hall of Fame trainer Roach told Sky Sports.

"But exhibitions? No. Manny is not into that.

"Manny has boxing fans. That's what we're after."

Mayweather defeated Pacquiao in the richest fight of all time in 2015 and, since retiring, has returned for exhibition bouts - most recently against Logan Paul.

But eight-division champion Pacquiao is still at the sharp end of the sport and was set to challenge the undefeated Errol Spence Jr before his withdrawal, and Ugas' entry.

Josh Taylor is the undisputed super-lightweight champion and among the world's top pound-for-pound fighters.

"That fight can happen, for sure," Roach said.

The Scotsman is set to defend his belts against Jack Catterall this year and has dreamed about facing his idol Pacquiao.

Taylor, whose dog is called 'Pacman' in tribute, has previously told Sky Sports: "To share a ring with my hero Pacquiao? That would be brilliant.

"How many people can say they shared a ring with their hero and beat them? Not many.

"He's funny, he sings, he puts on a Scottish accent. He's a people's champion, a really nice person, he gives money to feed people.

"He's an absolute gentleman and his fighting style is ferocious - a southpaw with fast hands who can fight like hell."

Roach said: "We are just going one fight at a time.

"The thing about Manny? He is not just going to pick some guy with a high rating because the world loves him.

"Manny wants to fight real fighters. He will challenge the best."