"It feels special to be a part of this historic night," Crystina Poncher teams up with Mikaela Mayer for boxing's first-ever all-female broadcast of the Joshua Franco vs Andrew Moloney bill, shown from 3am on Sunday live on Sky Sports 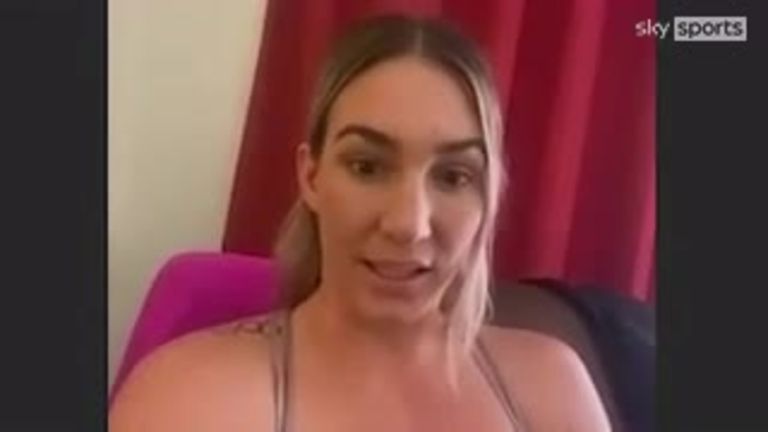 Poncher and Mayer, the WBO super-featherweight champion, will commentate on the Joshua Franco vs Andrew Moloney bill, shown from 3am on Sunday live on Sky Sports, which also features the pro debut of Nico Ali Walsh, grandson of Muhammad Ali.

An international broadcast of Franco vs Moloney, promoted by Top Rank, will be available to millions of fight fans in more than 150 countries.

Poncher joined Top Rank as a host and reporter in 2010, then made her commentary debut in 2013.

"It feels special to be a part of this historic night," she told Sky Sports.

"It's not often in life, if at all, that someone has an opportunity to make history, and it's something that I don't take for granted.

I hope more women are able to get opportunities in these roles as we move forward.

"It was a big step forward for women in the sport when I moved into the lead play-by-play role in 2019.

"Now this is another barrier-breaking opportunity as Mikaela joins the broadcast as the co-commentator/analyst, something that's never been done before.

"I hope more women are able to get opportunities in these roles as we move forward."

Mayer is one of the biggest stars in women's boxing, having claimed the WBO belt last year with a dominant points win over Ewa Brodnicka, and has since defended the title with another one-sided decision over former two-weight world champion Erica Farias.

"Mikaela is an ideal fit because she not only has the credentials in the ring being an Olympian and world champion, but she's excellent on camera in interviews and has a great personality and passion for the sport," said Poncher.

"I've had the pleasure of knowing her and covering her career since she turned pro, so a great rapport already exists for us both on and off camera.

WHO WILL COME OUT ON TOP? 👑@MikaelaMayer1 will be commentating on the action tonight and believes @AndrewMoloney has what it takes rip @JoshuaFranco_'s world title away

"Although this is her first time calling fights, I am confident she will excel and already know she's well prepared.

"I speak for us both when I say we are thankful and ready for the opportunity Top Rank has given us."