What next for Shakur Stevenson? Promoter Bob Arum said: "I want Oscar Valdez to fight Emanuel Navarrete, and to match Shakur against maybe Miguel Berchelt." The 24-year-old became a two-weight champion last weekend 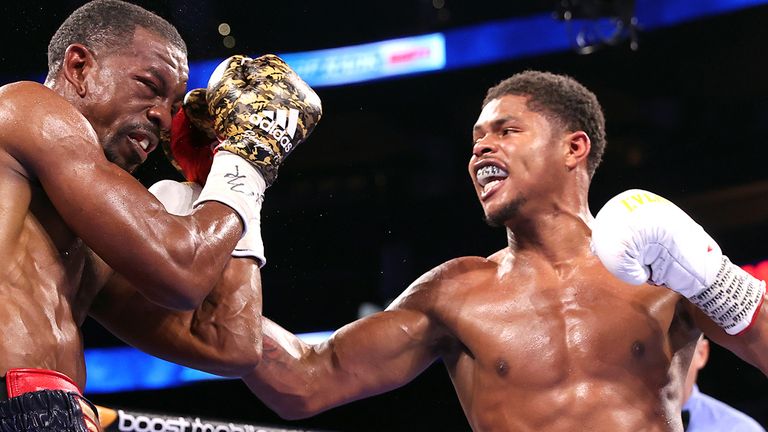 Shakur Stevenson is destined for "greatness" and has elevated himself into "a different category", says his promoter Bob Arum, who wants to pit him against Miguel Berchelt and Oscar Valdez.

Stevenson became an undefeated two-weight world champion at the age of 24 by dominating and stopping Jamel Herring to claim the WBO super-featherweight championship in a breakthrough performance.

He called out Valdez, who holds the WBC belt in the same division, saying: "He can't keep ducking! It's time to fight! Me versus Oscar, there is nothing else to look forward to."

Stevenson had clashed with Herring at a fiery press conference

Top Rank's Arum, who promotes both, told Sky Sports: "We can suggest it to the fighters. But ultimately it is the fighters and their management who decide who to fight next.

"I want Valdez to fight Emanuel Navarrete, and to match Shakur against maybe Berchelt, who Valdez beat in a spectacular fight.

"We'd see how Shakur does with Berchelt, then we can match the winners.

"I think that's the way to go. That's what we will suggest to them.

"I hope to have Shakur back in the ring in March or April. Same thing with Valdez and Navarrete."

Emanuel Navarrete is a two-weight world champion who would step into a third division to fight his fellow Mexican Valdez, if that fight happens.

Berchelt, also from Mexico, held the WBC super-featherweight title until he was viciously knocked out by Valdez. 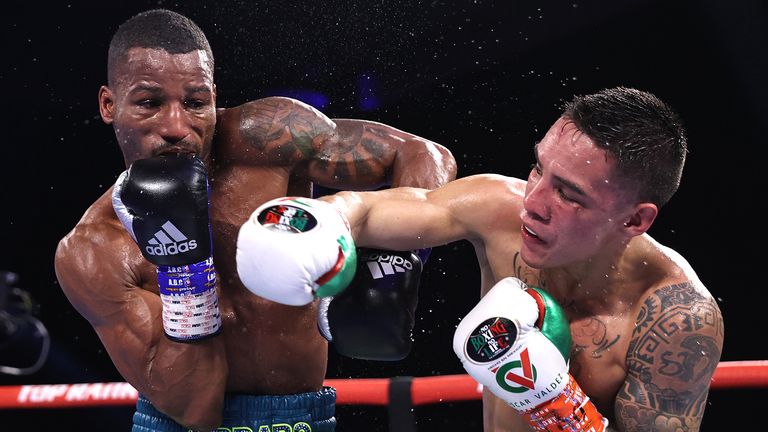 Oscar Valdez desperately clung onto his belt against Robson Conceicao

But Stevenson's most recent win, which added power to his undoubted skill, should put the whole sport on alert, Arum believes.

He said: "We always knew, as did everybody, that Shakur was an amazing talent.

"But it's one thing to be a talent, and another thing to take that talent and become a crowd-pleasing fighter.

"It was a great performance against a very skilled guy in Herring.

"Shakur, unlike his previous performances, didn't come out, win a few rounds, then coast to victory.

"He came out to beat his opponent decisively.

"That puts him in a completely different category to before.

"I see this as the opening act of Shakur Stevenson. We will see greatness in the years ahead."

Asked how successful Stevenson could become, Arum said: "Shakur will go into the annals among the superstars in boxing.

"It's a silly argument to say: 'Will he surpass Saul 'Canelo' Alvarez?'

"What does that mean? Nothing. They will never fight each other. They are in different weight categories.

"Will he surpass Tyson Fury? Who cares!