"To go out there and try and box a pure boxer was not the best move for him"; Michael Hunter says he fully expected former opponent Oleksandr Usyk to complete a commanding victory over Anthony Joshua

Anthony Joshua must learn the "laws of fighting" after losing his world titles to Oleksandr Usyk, says Michael Hunter, who rebuilt his career after a defeat by the Ukrainian.

Britain's heavyweight star has revealed that he could add an America-based trainer to his team after touring a number of gyms in the States following his unanimous decision defeat by Usyk.

Hunter suffered a points loss to Usyk in 2017, which remains the only blemish on his record, and he expected the pound-for-pound star to take Joshua's WBA, IBF and WBO titles. 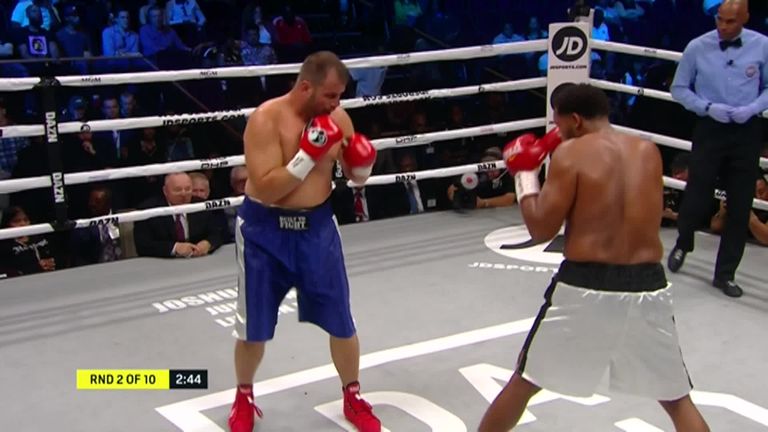 "It went exactly as I said it was going to go," Hunter told Sky Sports.

"Anthony Joshua did exactly what I said. The game-plan that he came out with, the strategic game-plan, or his trainers, I wouldn't put it all on him.

"To go out there and try and box a pure boxer was not the best move for him, but I think he can improve in the next fight."

Joshua is preparing to face Usyk again early next year after activating a clause for an immediate rematch.

But Hunter believes he could have passed on valuable advice if Joshua had headed to his training base in Las Vegas.

"It's funny, because when he was doing his rounds, I was like, 'I wish he could just take a trip over right where I'm at right now.' I wish I could be his trainer," said Hunter.

"He knows the rules, but I feel like he doesn't know how to apply the laws of fighting.

"A lot of these guys, we can use Andre Ward for example. He's not the most talented person, but he's very strategic in what he does.

"We all know it's a learning curve for Anthony Joshua. He's continued to grow since the Olympics. He's only getting better.

"I think he'll do well. It's a good opportunity to get his revenge."

Hunter moved up to heavyweight after his loss to Usyk, who also joined the top division after becoming undisputed cruiserweight king.

The American contender has defeated rivals such as Martin Bakole and Sergey Kuzmin while earning a No 2 position in the WBA rankings and would welcome another fight with Usyk.

"It's a little bit better for me, because I don't think anybody but Usyk would fight me, out of the rest of those guys," said Hunter.

"The fact that it's in Usyk's hands and it might stay there, it gives an opportunity for me to get all the belts. That's what I'm here for.

"I would like to fight the top guys and get these good names, but at the end of the day, I just want to become undisputed - and that's what I'm going for."