Anthony Joshua has plenty of future options available to him should he fail to secure a desired undisputed showdown with Deontay Wilder, says Eddie Hearn.

Joshua had been hoping victory over Andy Ruiz Jr on Saturday night at Madison Square Garden, live on Sky Sports Box Office, would lead to a battle for all the belts but news that Wilder has signed for a rematch against Luis Ortiz has dashed those plans. 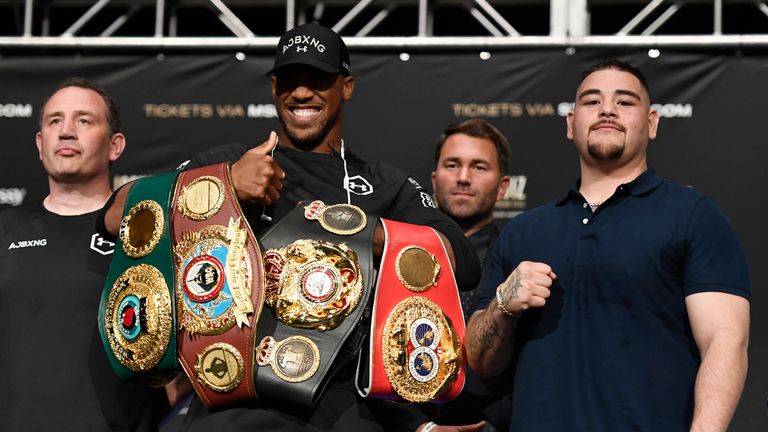 We're fine for opponents but the one we wanted was Deontay Wilder.

Joshua has urged his rival to come to his senses, but promoter Hearn admits that they may have to now consider other options.

"AJ is focused on this. Wilder has decided he doesn't want to fight Joshua so we have to focus on this career.

"This is dangerous, you take your eye off the ball for a minute and these challengers will turn your lights out. Joshua has to stay focused, this guy will do everything to try and knock him out.

"This is just the beginning. You've got Tyson Fury, Dillian Whyte, the two mandatories which is likely to be Oleksandr Usyk and Kubrat Pulev as well, we're fine for opponents.

"The one we wanted though was Deontay Wilder but if he won't fight him, there's nothing we can do. Forget about him and focus on what we can do."

"There are other challenges out there like Kubrat Pulev, Oleksandr Usyk, Michael Hunter, Tyson Fury and Dillian Whyte," the WBO, WBA' Super' and IBF world champion added.

"If it's not Wilder I will have to go somewhere else.

"What can I do? Hopefully he comes to his senses and comes to see us."

Watch Anthony Joshua vs Andy Ruiz Jr on Saturday, live on Sky Sports Box Office, from 10pm. Book it via your Sky remote or book it online here.Even if you aren't a Sky TV subscriber you can book and watch it here.