Michael van Gerwen has declared himself fit to challenge for a fourth successive European Championship title after recovering from his ankle injury in time to compete in Belgium this weekend.

The World Champion has been receiving treatment for the problem since returning home, and will defend his title this weekend at the Ethias Arena in Hasselt.

Van Gerwen aims to extend his winning run at the European Championship to a fourth successive year - matching Phil Taylor's record from 2008-2011. 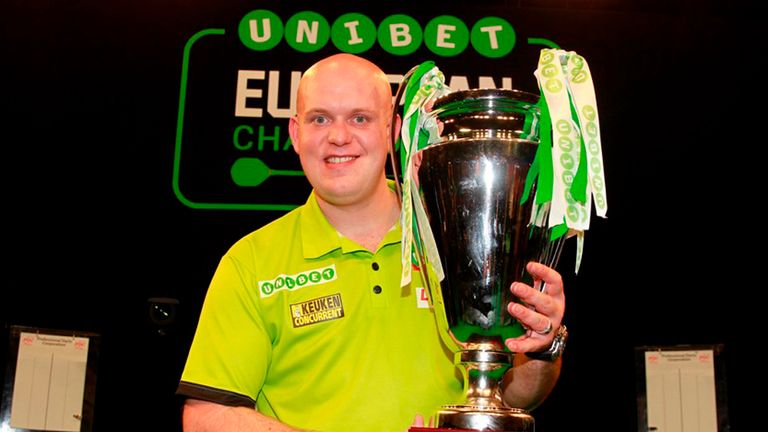 He faces an all-Dutch first-round tie when he meets Jan Dekker in Thursday's opening night, and the number one seed said: "I'm looking forward to getting back playing and I hope I can win this title again.

"I've had a good rest since the weekend and had some treatment for my ankle and it's feeling a lot better now. I've been practising again and I'm feeling good, so I'm focused on the European Championship now.

"It's been special to win this title three years in a row and it would be a great achievement if I can make it four titles because only Phil Taylor has ever done that before."

The world No 3 plays Polish star Krzysztof Ratajski as the first round continues on Friday afternoon, and is in confident mood after reaching the semi-finals for the past two years in Hasselt.

"I can't wait," said Wright. "I hadn't been able to practise much before we went to Germany so that may be the trick, or using a brand new set of darts like I did last weekend.

"We'll see what happens in Belgium. I always dig deep and try not to give up in a game and I got lucky last weekend."

Last year's European Championship finalist Mensur Suljovic takes on Kim Huybrechts in one of the high-profile first round ties, while the Belgian's elder brother Ronny takes on Welshman Gerwyn Price.

Dekker test for MVG in Belgium

The Grand Slam of Darts gets underway live on Sky Sports as the best of the PDC compete against the best of the BDO - the action from the Wolverhampton Civic Hall begins on Saturday, November 11 with a double session.