Ashton was beaten by Jan Dekker on the opening night last Thursday, the first of the two multiple BDO women's world champions to take to the stage this year - and on Monday it was the turn of three-time BDO winner Dobromyslova, but she was no match for Joyce.

The 33-year-old from Newcastle lost the opening leg but reeled off nine of the next 11 legs to play the part of pantomime villain after Dobromyslova had been roared to the stage and, to the crowd's delight, pinned double eight to take the opening leg.

The Russian, beaten in the preliminary round in 2009, had qualified via the Rest of the World qualifier, while Joyce had earned his Ally Pally bow on the back of a solid year on the Pro Tour, and in the end his class showed.

Joyce advances to a second-round showdown with Simon Whitlock, while Dobromyslova and Ashton exit having raised awareness of the women's game with their ability and personality that ensures this is likely to be just the start of women featuring regularly on the PDC stage. 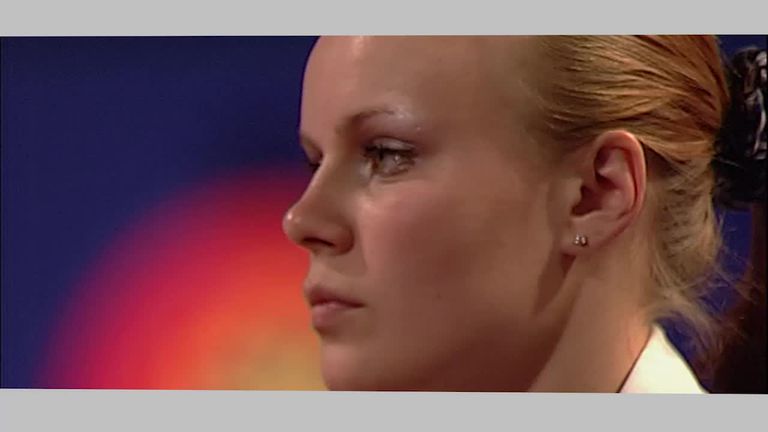 Dobromyslova has spent most of the last few years concentrating on being a mother, but she has been telling the media that the qualifier and the build-up had made her thirsty for success.

The 34-year-old started in style, winning the opening leg with her first dart at a double, however that was as good as it got as Joyce began to motor.

A brilliant 106 saw the world No 74 get back on level terms and he followed with clinical kills on 122 and 95 to take the first set.

Three more legs followed for Joyce, taking his tally to six on the bounce as Dobromyslova struggled to make any inroads, her scoring power letting her down as she failed to apply any pressure to Joyce.

Having failed to even get a dart at a double during Joyce's run, Dobromyslova stopped the rot in the opening leg of the third set, having missed two darts at double 12, she returned to pin double six and get back on the board.

But Joyce was proving a tough nut to crack, and he responded to his opponent hitting the front in the set by finding a brilliant three-dart combination to take out 116 and move within two legs of the match. 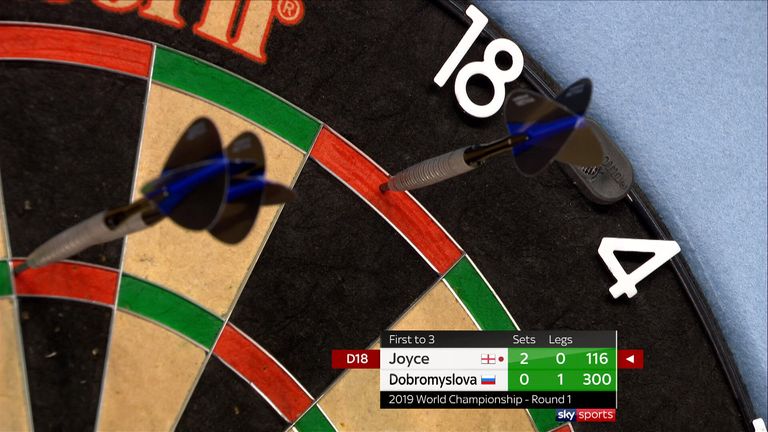 There was still time for a Dobromyslova flourish after Joyce missed a couple of darts for a 2-1 advantage - she pinned double 12 to take the lead in the set but could not find the darts to take the match any further and Joyce took full advantage.

Double six ended Dobromyslova's dream and with it female hope at this year's tournament, but nothing could hinder the Russian's delight at being back in the Ally Pally limelight as she congratulated Joyce and joined in with the crowd's traditional end of match 'dance-a-long'.

You can follow every dart from every session of the World Darts Championships on Sky Sports Darts, check out the full schedule here. You can also stay up to date with all the action behind the scenes by following us @SkySportsDarts