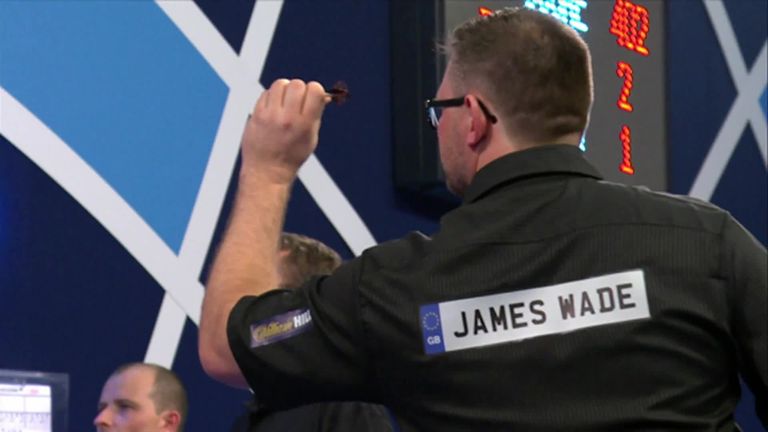 Third seed Peter Wright and five-time world champion Raymond van Barneveld have already crashed out in the first week and ninth seed Wade avoided a similar fate a couple of hours after Whitlock lost in the second round.

LISTEN TO THE DARTS SHOW PODCAST SPECIAL WITH STEPHEN FRY

Wade trailed 2-1 but was at his dogged best to fight back and when the game went into sudden death at 2-2. In the fifth set, it was The Machine who rattled off the final two legs to beat Japan's rising star Asada who had produced some spectacular darts to forge a lead.

Earlier in the evening Ryan Joyce, who ended the Anastasia Dobromyslova fairy-tale, did the same with the Wizard, and on a day of upsets Brendan Dolan and William O'Connor also chalked up memorable victories to reach the last 32 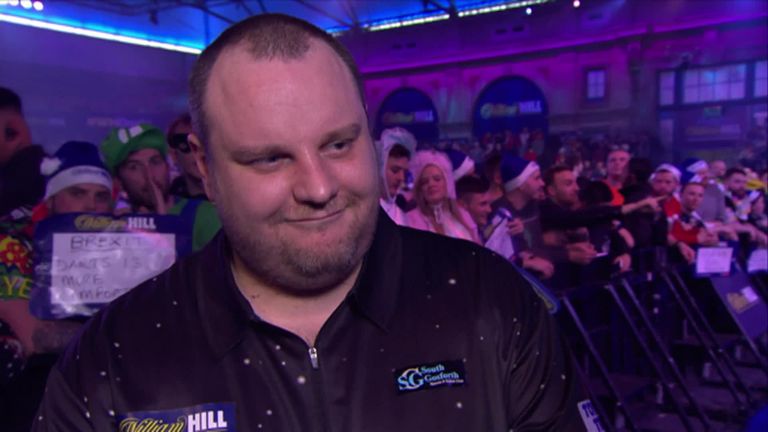 Whitlock's hopes of a maiden world title were ended in a comprehensive 3-0 defeat by Joyce.

The Wizard was beaten in the 2010 final and had designs on another run to New Year's Day after an impressive year on the circuit but his adventures in north London are over for another year after falling at the first hurdle to the world No 74 who is making huge strides this year.

Joyce was too strong and too consistent for an erratic Whitlock who missed 18 darts at a double and averaged a shade over 87 in a below-par performance. The Aussie's struggles allowed Joyce, nicknamed Relentless, to capitalise. An average of 90 was enough to keep pace but it was the finishing that made all the difference as a 47 per cent check-out rate, including a brilliant 109 finish, did the damage. 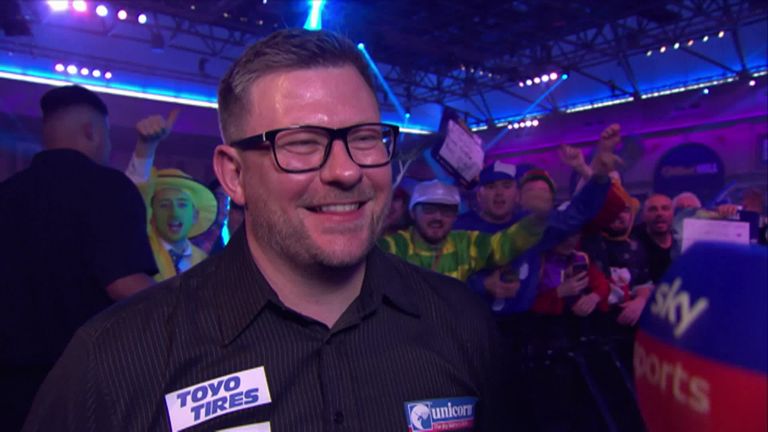 Wade was outscored in the averages and the 180s while Asada also took out two 100+ finishes, but Wade scrambled over the line.

Wade's overzealous celebration during the match caused some headlines with Sky Sports experts Mark Webster and Wayne Mardle critical of his behaviour.

Wade claimed the European Championship and World Series titles this year and he took the opening leg of the contest before Asada went through the gears. 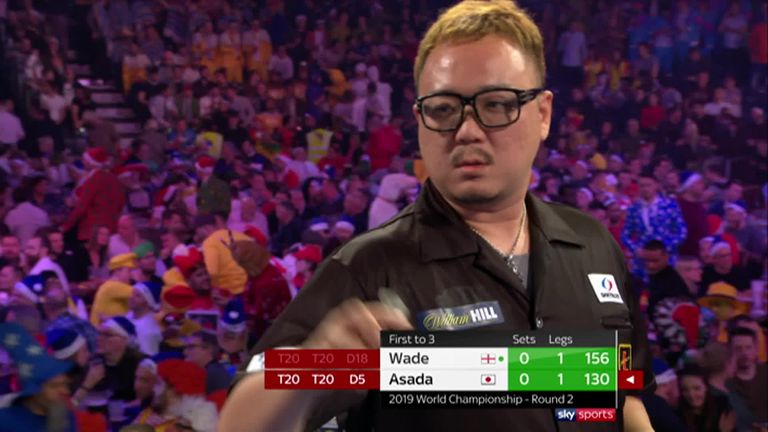 Asada pushed his average well into the 100s thanks to a sizzling 130 finish on the bullseye and then completed a hugely impressive first set via double 10.

The Japanese ace continued where he left off, pinning 104 to start the second set in style but Wade, a semi-finalist in 2009, 2012 and 2013, rallied to level the match but he was forced to play catch-up throughout.

A dramatic final set was bossed by Wade but Asada refused to go away and eventually he crossed the line with a classy 86 but there may still be questions to answer after his antics. 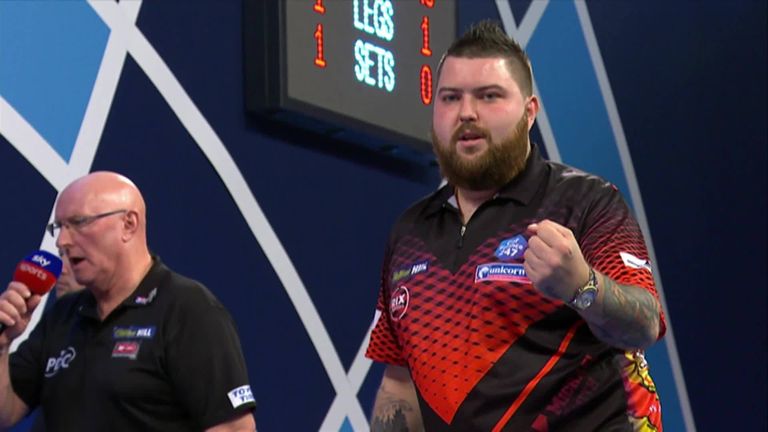 Michael Smith was not at his big-scoring best but did enough to see off Ron Meulenkamp with a 3-1 win to advance into the third round.

Bully Boy, who has only one quarter-final place at the Worlds to his name, is in the wide-open bottom half of the draw and having accounted for Meulenkamp will now face John Henderson or Gabriel Clemens for a place in the last 16.

Seven 180s belied an unusually below par 94 average from Bully Boy but finishes of 132, 112, and a brilliant 90 on the bull for a crucial break of throw in the fourth set proved pivotal

Meulenkamp had come from 2-0 down to beat Brazilian ace Diogo Portela on Tuesday and took the third set to rekindle his hopes but Smith proved too good pinning double 10 after Meulenkamp's dart at bullseye fell just short of a match-saving 122. 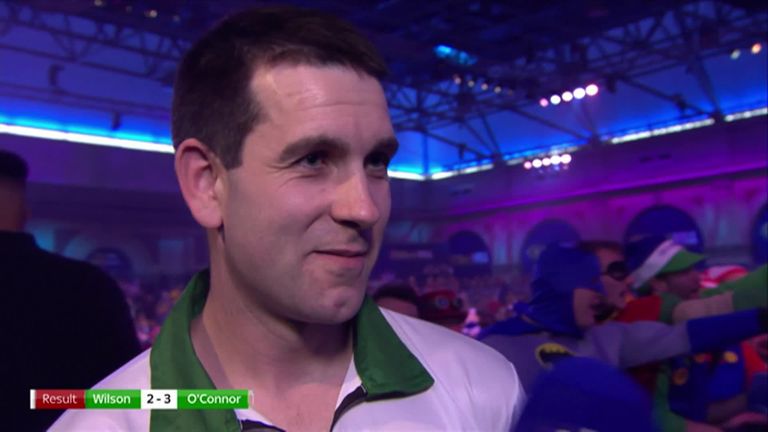 William O'Connor won his first round match on Sunday afternoon and returned to recover from a first set James Wilson barrage to continue his best ever run at Alexandra Palace.

Wilson had claimed a stunning opening set, a sensational 100+ average was crowned with a superb 160 check-out before O'Connor hit back to level the contest

A brilliant 110 finish, the Magpie's second three-figure outshot, set the Irishman on his way to the set, taking advantage as the Jammie Dodger was unable to sustain his remarkable start.

With Wilson's level dropping O'Connor took the third set before seeing a match dart go begging in the fourth which allowed Wilson to force a decider.

And it was O'Connor who held his nerve, winning the final set 3-1 to complete a hugely impressive 3-2 win over the world No 26 and a last-32 date with Mensur Suljovic or Ryan Searle.

Hurricane off to whirlwind start

Kim Huybrechts sent out a fierce message to the rest of the field with a whitewash win over Daniel Larsson. The Belgian star won nine consecutive legs to ease into the third round, hitting six 180s and averaging 103.59.

Huybrechts looked back to his best in a phenomenal display, and now he will prepare to meet Dave Chisnall in the round of 32.

Another player who caught the eye in the afternoon session was Brendan Dolan who was full value for his 3-0 win over Joe Cullen. 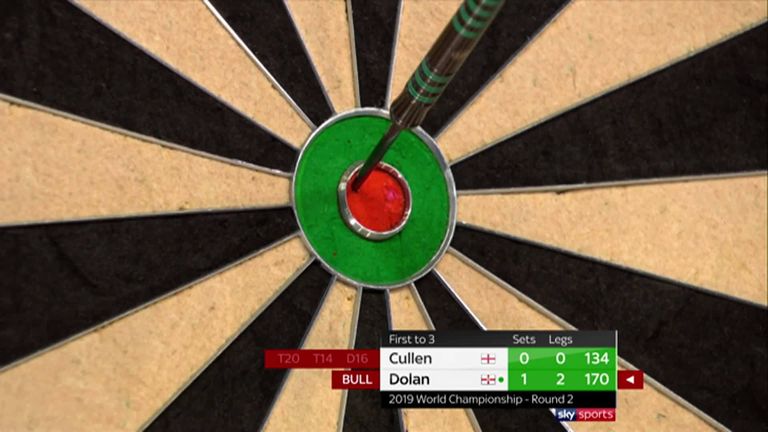 Dolan found big scores at the right times and brought the house down with the first 170 checkout of this year's tournament.

The Irishman is through to the last 32 for the seventh time, yet has never previously progressed past that point while Cullen, talked up as an outsider for the title, is yet to go beyond the second round in nine visits. 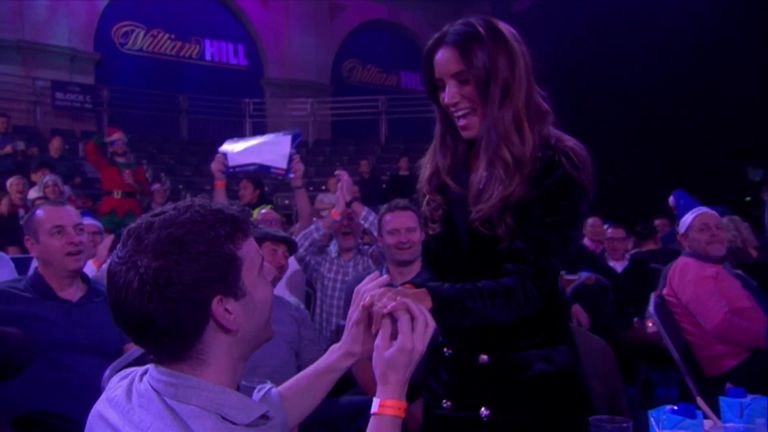 There was no Dutch delight in the afternoon session as Geert Nentjes and Jeffrey de Graaf fell to Nathan Aspinall and Noel Malicdem respectively.

Aspinall was too strong for a disappointing Nentjes, winning 3-0. Meanwhile, Philippines star Malicdem came from 2-1 down in sets to triumph 3-2 and set up a meeting with Kyle Anderson.

You can follow every dart from every session of the World Darts Championships on Sky Sports Darts, check out the full schedule here. Also, follow us @SkySportsDarts and get all the latest news, previews and interviews by heading to www.skysports.com/darts