By Paul Prenderville at the Barclaycard Arena, Hamburg

Scotland claimed a first ever World Cup of Darts title, ending the fairytale run of the unseeded Republic of Ireland with a 3-1 win in Sunday's final in Hamburg.

Gary Anderson - back after missing the Premier League through injury - and Peter Wright had twice before fallen at the final hurdle, losing to England in 2015 and the Netherlands last year.

But 2019 was their year as they capped a memorable tournament with victory over an Irish team that had beaten England, Austria and Netherlands on their way to the final - a 2-1 semi-final win ending the Dutch two-year grip on the title. 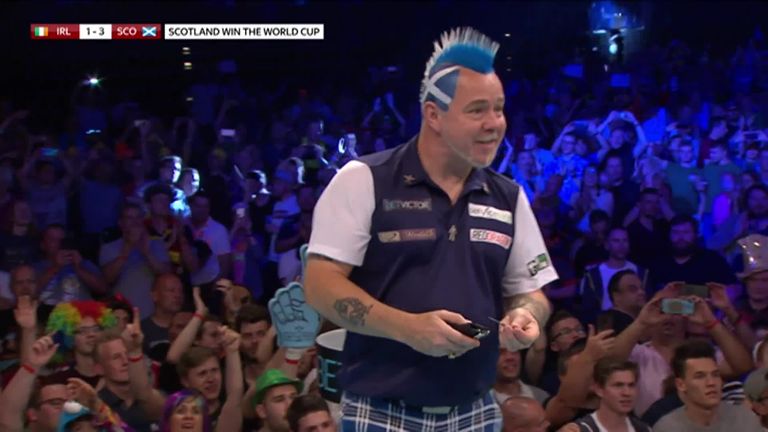 After Ireland had taken the lead, it was Wright that proved the decisive factor, winning both his singles matches either side of the doubles where the Scots had teamed up for a 4-0 win allowing Wright to apply the gloss to a superb display from the pair.

Steve Lennon and William O'Connor, the world number 35 and 47, proved to be stern opposition but in the end, the class of Anderson and Wright prevailed as they became just the third team to claim the title, Wright's second major televised crown and another chapter in Anderson's legacy. 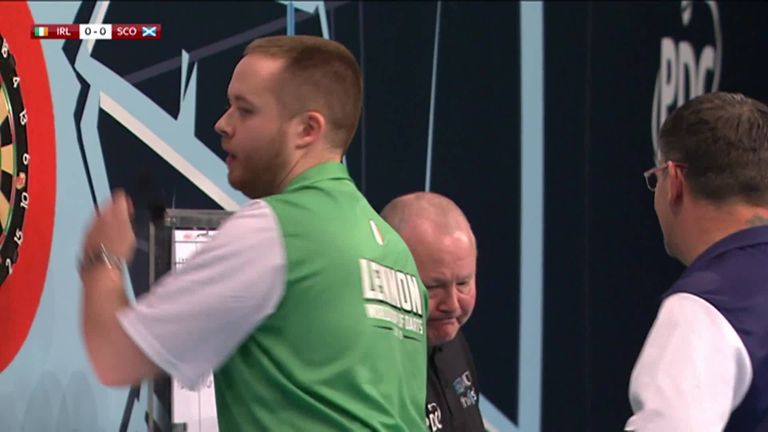 A dominant Scotland had swept into the final without losing a rubber but that lasted little more than 15 minutes as Lennon claimed a hugely impressive 4-2 win over Anderson.

An ice-cool Lennon claimed the opening two legs only to see the two-time world champion was unfazed. Back he roared to get the match back on throw only for Lennon to produce a 13-dart break and then seal a 4-2 win with a brilliant 110 finish. 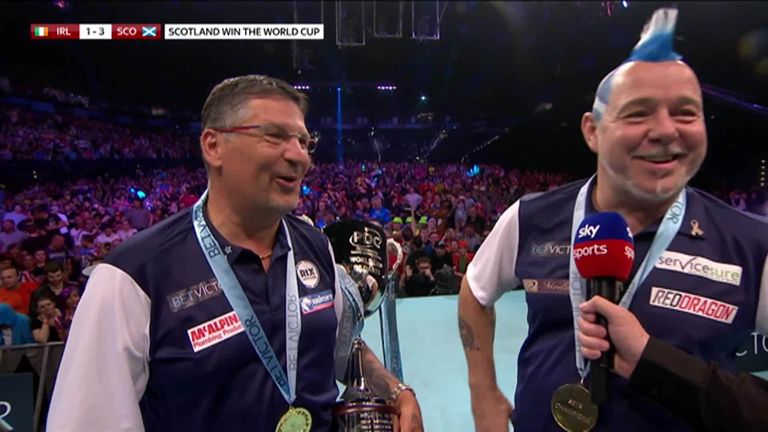 Snakebite levelled up the contest, digging himself out of a hole against O'Connor from 2-1 down to win 4-2 - a break of throw in the fifth proving crucial with little between the pair and the teams as they headed into the doubles locked at 1-1. 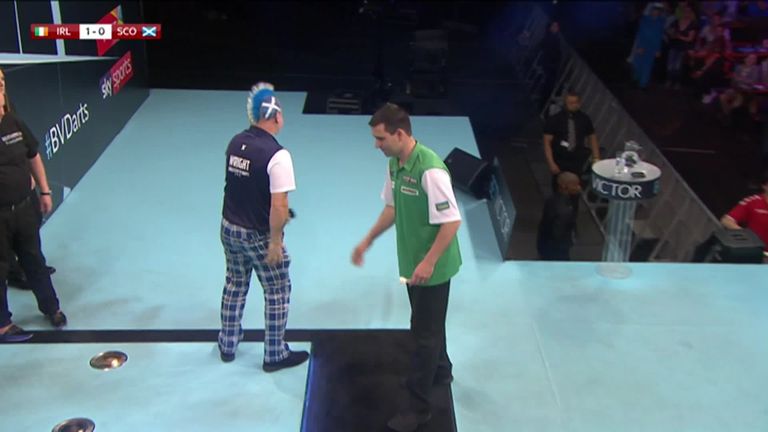 In just their second doubles match of the week, Wright and Anderson gelled brilliantly, Snakebite pinning three darts at double as the Scots surged into a 3-0 lead with a performance full of authority.

Anderson then claimed the winning double to put Scotland within a point of the title and Wright was to prove the hero as he beat Lennon 4-2. A break via double top in the opening leg set the tone, and the same target allowing Wright to move 2-0 in front and within two of the title. 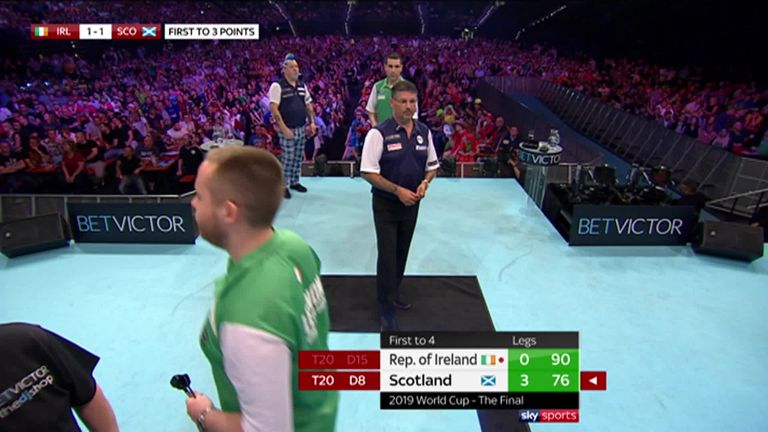 A battling Lennon, who had missed very few opportunities at double top all week, made no mistake with his first chance to get a leg on the board but that was as good as it got.

Fittingly Wright returned to the very top of the board to seal victory with double top ensuring it was the name of Scotland added to the trophy, and with it a winners cheque of £35,000 for each player. 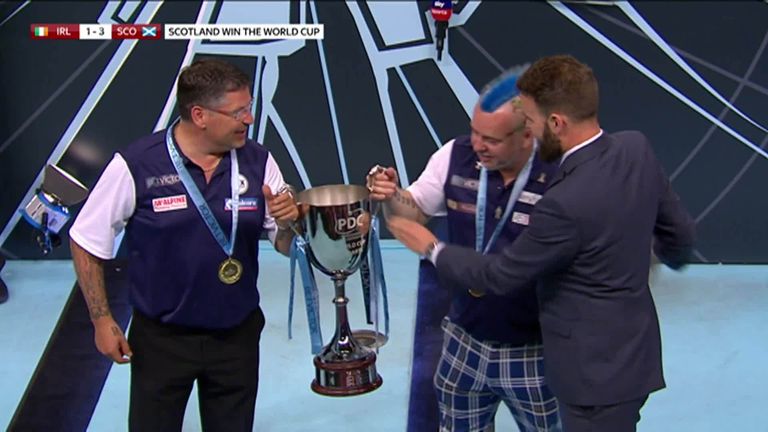 How they reached the World Cup of Darts final.....

Scotland beat Japan 2-0 in last year's quarter-final without dropping a leg and while the scoreline was the same both Anderson and Wright were tested as first-time semi-finalists Japan underlined their improvement. 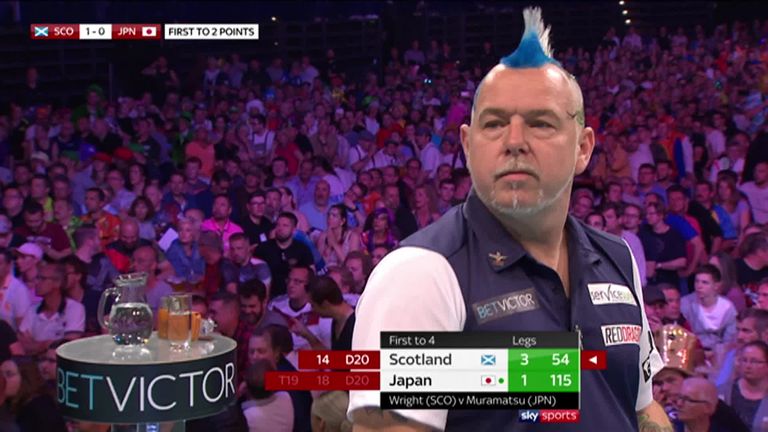 However the end result was the same 2-0 scoreline and a third final for the Scots, Snakebite sealing the win with by beating Haruki Muramatsu for the loss of just a single

Seigo Asada had matched Gary Anderson in the averages in the opening rubber, but the two-time world champion raced through the first three legs in 44 darts, firing in finishes of 118 and 113 along the way.

Asada responded in style with best of the match 127 and then closed within one after Anderson was unfortunate to see match dart at tops ricochet into double one but he had time to return for a 4-2 win and the opening point.

The Republic of Ireland ended the Netherlands two-year hold on the trophy, coming from 1-0 down to win 2-1 thanks to a sensational display of team play in the doubles. 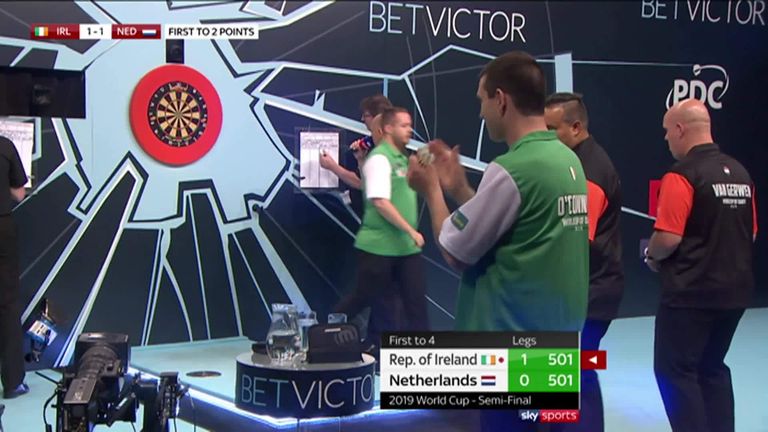 Steve Lennon took out finishes of 131 and 128 as the Irish whitewashed the Dutch pairing of Van Gerwen and Wattimena to complete the victory - it also meant they had beaten the only two teams to have won the trophy, having send England packing on Saturday night.

In the singles, O'Connor blitzed his way past an out of sorts Wattimena to level the contest after a more focussed Van Gerwen battled past Lennon.

Following a blistering 136 from MvG in the opening leg, the world no 1 was forced to go the distance as Lennon battled back from 3-1 down to force the last-leg shoot-out where MvG eventually prevailed.