Keane Barry is one of the most exciting prospects in darts, and his performances on the oche in recent weeks have done little to calm the hype.

In the last 12 months, the Irishman has won JDC and BDO Youth world titles, the Irish Matchplay and World Boys Masters, and made his PDC World Championship debut last month, falling to Vincent van der Voort at Alexandra Palace.

The Duleek youngster is fully committed to breaking into the sport's elite, and is now playing on virtually a full-time basis. Two years after leaving school, he works in scaffolding for his father, but work commitments are falling as his darting duties rise.

This week, he heads to Wigan to take part in the PDC's Q-School, hunting for a Tour Card on the professional circuit.

"It's my first time going to Q-School," he told Sky Sports. "I was going to go over last year, but there was a lot on. Me and Dad just said we'd give it another year, see how last year went and we'd see what the story is for 2020.

"I'm playing well, so looking forward to going over.

"I'm not going to put serious pressure on myself to get the Tour Card. It would be nice to get it, but I know myself it's going to be hard. If it all goes well, a Tour Card on the Pro Tour for two years would be amazing. But, if not, I still have the Challenge Tour and Development Tour for the next year. It's still a very exciting year ahead."

Barry knows just how tough the field could be, and is under no illusions as to the scale of the task in the coming days.

"It is very hard. You have to be very consistent," he added.

"There's a lot of lads there that can catch you on the hop. Whoever is going there is obviously well able to throw darts. They're not over there just to take part, they're going over there to win their Tour Card.

"So it's going to be very hard, but I'm looking forward to it."

Last Saturday, Barry reached yet another landmark in his promising career, defeating Leighton Bennett in the BDO World Youth Championship final. The Meath youngster displayed all the experience he has garnered, in ruthlessly seeing off the highly-rated English teenager 3-0.

"When you win a World Championship, it's amazing," smiles 'Dynamite'. "You feel like you're on top of the world. But you have to come down back down, and go in with the same confidence like I did against Leighton. I knew I had to play well and I knew what I had to do.

"Everything clicked on the day. Hopefully when I go to Q-School, it goes the same way.

"[It's] everything I've dreamed of when I was younger, to be a world champion and it happened twice in three weeks! To make my debut in Ally Pally, that was a dream as well. I didn't think it would happen this early.

"It was amazing to be up there playing against Vincent.

"It's something you dream of when you were younger, and it's amazing to be a part of it all."

Such big-game experience has clearly stood to him.

In October, he faced Liam Gallagher in the final of the Tom Kirby Memorial Irish Matchplay. Nerves clearly played their part, as he missed no less than six darts at double for the match before he eventually found double six. But he was let out of jail by his opponent.

He vowed never to make such an error again.

"When I was playing against Liam, I know I got lucky, but you need your luck sometimes," he said.

"I just took it on board and [now] on winning doubles...I'm going to take the extra second to compose, settle myself down rather than rushing in and trying to get it over with.

"Against Liam, I rushed the doubles. I went back to the drawing board, fixed that and it's improved since then.

"A lot of the things I did wrong, I put right. I put a lot of effort into trying to perfect my game." 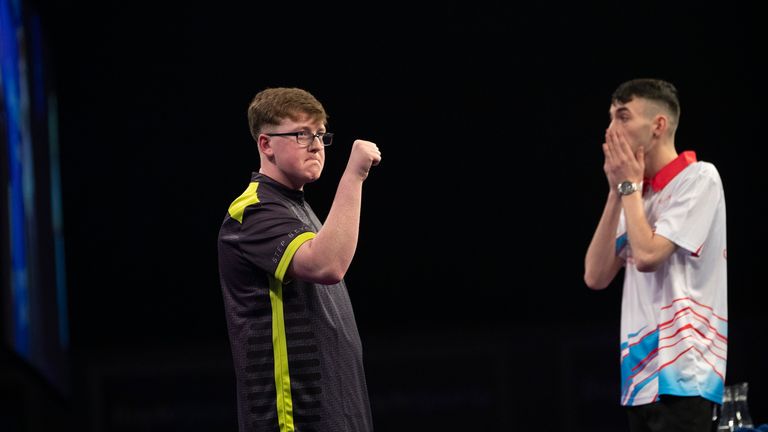 The scoring is going well and the doubles are going in well, everything is starting to click together so it's all coming together at the right time for me.

Barry is confident he is hitting form ahead of Q-School

After last weekend's win over Bennett, Barry was congratulated by Dave Chisnall, and he has been fortunate to mix with some of the biggest names in the sport.

"I was practising with Michael van Gerwen in the Citywest, and he'd be a person I'd look up to a lot now," he continued. "After I won the JDC title, he came over and said well done, and said I was very unlucky against Vincent. I know it might not sound a lot, but it meant a lot to me. Him and Adrian Lewis would be the two people who I'd look up to in darts."

BDO World Youth Champion 2020👊🎯 what a match fair play to @L8tonbennett and thanks to everyone who supported me!!

Such has been the extent of Barry's rise, many commentators even called for his inclusion as a 'Challenger' in the Premier League.

"It's brilliant to even have my name circling around that talk, being a 'Challenger' for the Premier League. I thought myself that Willie (O'Connor) probably deserved it, Willie had a great year," he said modestly.

"For me it would have been a bonus, amazing to play in the 3Arena against the top lads in the game. But there's loads of time for me. Hopefully I have a good year, same as last year, and you never know next year, it could be my year in the Premier League."

Keane Barry is one of dart's rising stars, and most are in agreement that he will be at the top of the game in the coming years.

However, the speed of his ascent depends greatly on how he fares in the coming days at Q-School.