"I appreciate being invited back. I must be honest, it's either going to make me or kill me, so it will be interesting to see how it goes"

Gary Anderson was forced to withdraw from last year's Premier League due to injury, yet as the two-time champion prepares to make his return to the sport's biggest roadshow on Thursday, he insists it will be a 'make or break' campaign.

'The Flying Scotsman' was struggling with a recurring back injury 12 months ago and his decision to withdraw from the competition prompted the PDC to implement the 'Challengers' concept that has been retained this year.

Anderson marked his return to action by claiming a maiden World Cup of Darts title alongside Peter Wright last summer, although he wasn't able to replicate that form in subsequent televised events.

The 49-year-old has not appeared in a major ranking semi-final since losing 6-1 to Michael van Gerwen at the World Championship 14 months ago and he admits his lack of sharpness was exposed throughout 2019.

"I missed it [Premier League] last year and it kind of showed," Anderson told the Darts Show podcast. "It's taken a long while to get used to being back on the stage.

"I appreciate being invited back. I must be honest, it's either going to make me or kill me, so it will be interesting to see how it goes."

The Premier League is renowned for being one of the most gruelling events on the circuit - with 17 weeks of competition throughout the UK and Europe coupled with Pro Tour commitments each weekend.

Anderson's participation on the Pro Tour has been increasingly sporadic over recent years and he's not featured on the European Tour since 2016.

The Scot's absence from last year's Premier League was a double-edged sword. It provided him with the opportunity to spend more time with his young family, although it left him playing catch-up with his rivals in the crunch part of the calendar.

Whilst his Premier League return arguably negates the necessity to practice - a motivation he openly lacks, it will also provide a stern test of his credentials - both physically and mentally.

"If I wasn't in it this year I wasn't in it. I must admit last year I was off with a bad back, but being home for that length of time - I loved it. I loved every minute. Yes I missed it, but at the same time I spent time with the kids and Rachel [his wife].

"The thing with me now is I cannot get myself to a dartboard to practice, so back in the Premier League, after the Premier League we're away to tournaments at the weekend, so I'm going to be constantly playing now - Wednesday, Thursday, Friday, Saturday and Sunday. 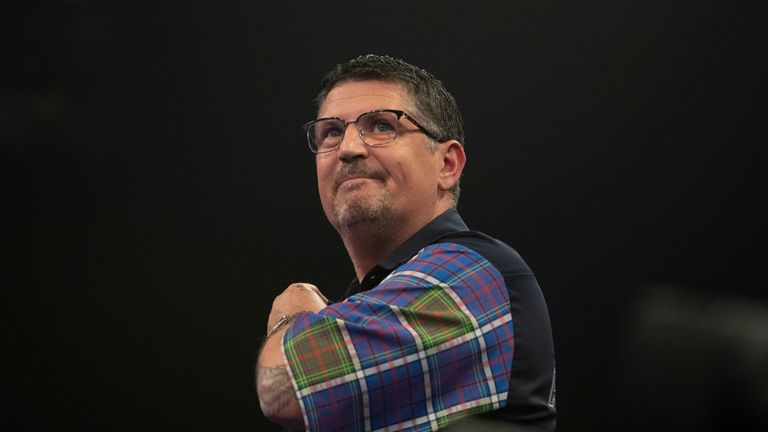 "It will make me or break me. I don't know what is going to happen but we'll give it a great go."

Anderson on the 2020 Premier League

"It will make me or break me. Whether the body allows me to [perform] that's a different story. I don't know what is going to happen but we'll give it a great go."

The two-time world champion is a master in self-deprecation and he's persistently played down expectations throughout the last 12 months. There can be no getting away from it however - 2020 will be a defining year for Anderson.

He currently occupies sixth spot on the PDC Order of Merit although he's defending a sizeable proportion of ranking prize money over the coming months.

The Scot won UK Open and World Matchplay titles, finished runner-up at the Grand Slam of Darts and reached semi-finals at the Players Championship Finals and the World Championship in 2018.

The rolling two-year Order of Merit system dictates that Anderson is defending over £430,000 in ranking prize money throughout the next 12 months and if he endures a similarly barren spell as he did in 2019, his status as a top 16 player will be in serious jeopardy.

Nevertheless, Anderson performed encouragingly at the recent World Championship and sent out a statement of intent with a dominant 10-2 victory over Gerwyn Price at last weekend's season-opening Masters in Milton Keynes.

Having battled past Ian White in his opener, the reigning World Cup winner produced an imperious display to thrash the world No 3 with an average of almost 103, before he was beaten 11-7 in a high-quality semi-final clash against his compatriot and eventual champion Wright.

"What I was playing in last year - I wasn't playing. I was just getting nipped here and there, so that was me not throwing darts from week to week.

"The signs were there. Now we're starting again from scratch. I'm going to be playing every week so it has got to get better. If it doesn't then I'm deep in trouble," he added.

There are also growing signs that Anderson's hunger is resurfacing and that's ominous for his rivals, as Michael van Gerwen would attest to.

Anderson's frustrated demeanour following his recent Alexandra Palace exit against Nathan Aspinall was reminiscent of the burning disappointment he felt after losing to Van Gerwen at the third round stage in 2014.

The Flying Scotsman was seething after relinquishing a 3-1 cushion against his Dutch rival six years ago and his fury was compounded as Van Gerwen went on to lift a maiden world title.

Anderson responded by registering back-to-back World Championship successes and it was only an inspired display from 'Mighty Mike' in the 2017 showpiece that denied the Scot a third straight triumph. The two-time Premier League champion will be hoping that history repeats itself.

"I was getting beat and it wasn't bothering me. It's been a long time since Michael beat me that time and I got a right cheese on," Anderson conceded.

"It doesn't usually bother me and it showed. I knuckled down and I did play well, so it's getting back that way a little bit."

In the immediate future, the world No 6 will be hoping to build upon his promising showing at the Masters when he faces two-time major winner Daryl Gurney in his Premier League opener tomorrow night.

The pair cannot be separated in terms of head-to-head meetings, with both men claiming eight wins apiece from their 17 meetings, although home advantage could prove decisive in Aberdeen.

Anderson's absence from last year's competition left an inevitable void - his popularity coupled with his enigmatic ability ensures he's one of the most watchable stars in the sport.

'The Flying Scotsman' has carried the hopes of a darting nation on his shoulders over the last decade, although he's no longer the principal linchpin in Scotland.

Peter Wright became the second Scot to be crowned PDC world champion on New Year's Day and with John Henderson set for his return as a Premier League 'challenger', Anderson believes this prolific era for Scottish darts should be celebrated.

"Back playing in Aberdeen - we've got Peter as world champion, we've got John Henderson appearing again after his walk-on last year. I watched that.

"We're also World Cup winners, so it will be good. The new venue as well, I'm looking forward to seeing what that is like."

Follow every week of the Premier League on Sky Sports, kicking off in Aberdeen on Thursday February 6 and 17 weeks of action continues every Thursday through until the Play-Offs on London on May 21.