By Paul Prenderville at the Marshal Arena, Milton Keynes 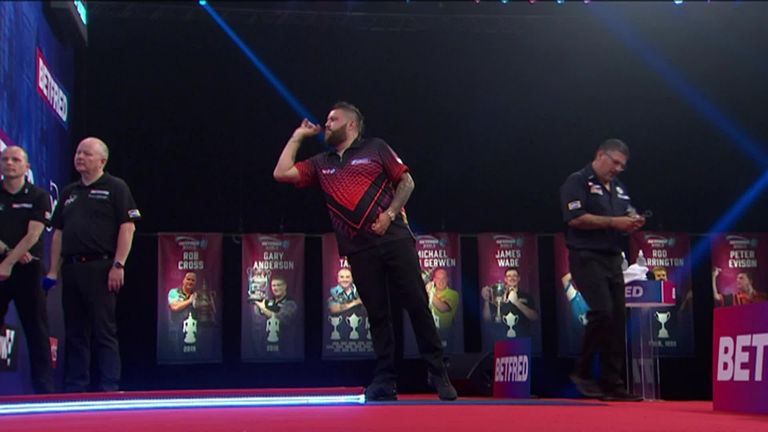 Dimitri van den Bergh will meet Gary Anderson in Sunday's World Matchplay final, after the pair came through epic semi-finals to set up an intriguing showpiece finish to the tournament in Milton Keynes.

A thrilling nine days of darts will reach a generational conclusion with proven performer Anderson taking on the highly-rated debutant Van den Bergh, who has finally lived up to his reputation as one of the game's brightest stars.

2018 champion Anderson has gone under the radar at the Marshall Arena but he ended Michael Smith's hopes of a maiden major with a thrilling 18-16 victory to reach his second final in three years at the tournament and his 20th major televised ranking final.

At the other end of the scale Belgium's Van den Bergh, a two-time world youth champion, ended Glen Durrant's hopes of a first PDC televised final to reach a first himself with a 17-15 victory, becoming the first player to reach the final on debut since James Wade was beaten by Phil Taylor in 2006.

As the only former champion in the field, and a multiple major winner, Anderson has slipped through to Sunday's showpiece somewhat under the radar and he dished out a stark reminder to his former protégé.

Anderson repelled a storming comeback from 'Bully Boy' to get over the winning line in sudden-death legs and reach his second World Matchplay final in three years.

Smith twice fought back from five legs down and despite outscoring Anderson 14-7 on the 180s, his usually formidable scoring power dipped and a below-par performance on the doubles cost the world No 5. 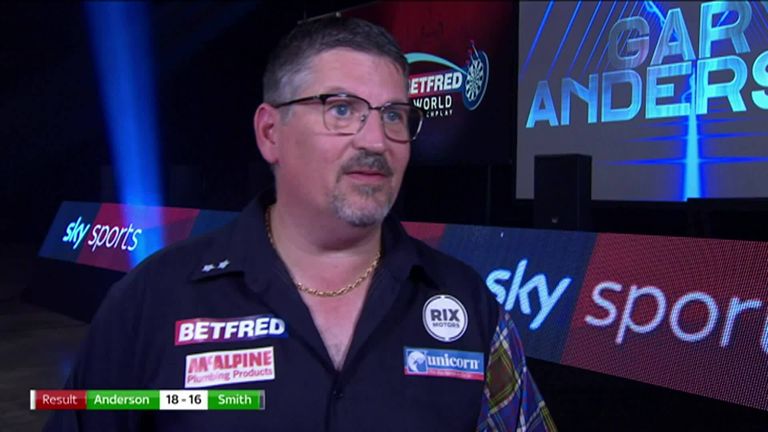 Anderson fired in finishes of 128, 127 and 116 on his way to a first victory over Smith since April 2018 and it was the Scot who fired the first blow, breaking for a 4-2 lead which he turned into 5-2 as Smith struggled to find a way in.

A brilliant Shanghai 120 finish halted Anderson's three-leg run but Smith couldn't get anything going and Anderson moved 8-3 in front before the man from St Helens finally started to find his range.

Smith pinned double top to finally get a leg on the board and made it back-to-back legs for the first time in the match and added another to close to within one leg. All four legs won by Smith came after Anderson had missed a dart a double but the Scot is more experienced than most. 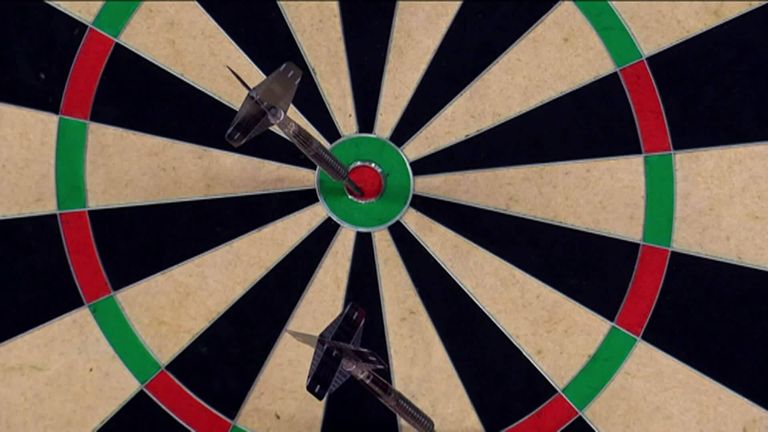 Anderson fired in a brilliant 127 to lead 9-8 and Smith drew level for the first time since the fourth leg of the match and a masterful 128 finish sent the Flying Scotsman clear.

Three more followed after the interval as Anderson reestablished a five-leg cushion and when he missed darts for a 15-9 lead, Smith fought back brilliantly to draw level at 14-14 - but only after the Scot missed a dart at bullseye for what would have been a crushing 167 and a 15-13 lead.

Instead the see-saw nature of the contest continued as the pair went into overtime, trading the lead until Anderson finally struck the decisive blow to break and seal his epic success. 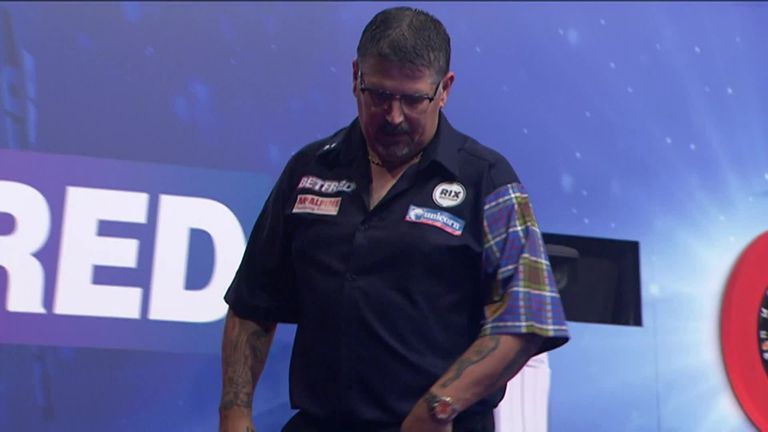 Much like Anderson and Smith, there is plenty of mutual respect between Van den Bergh and Durrant, who have been practising together and have the same manager, but it was the younger man who reached the final. 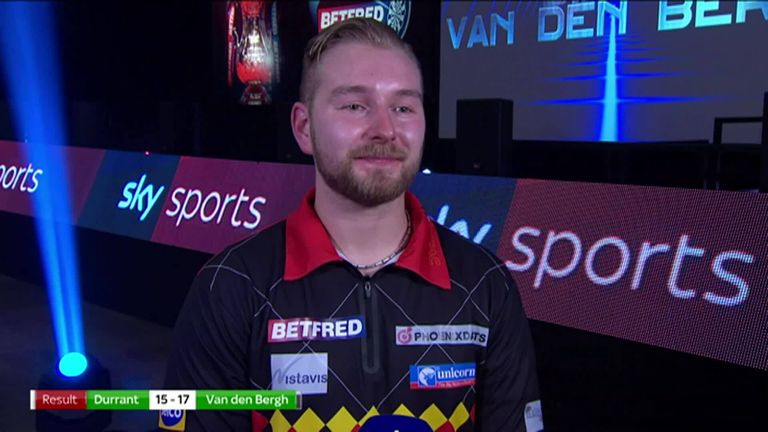 Van den Bergh, twice a World Championship quarter-finalist, has never gone beyond the last eight of a televised major individual tournament but he was nerveless to stave off a typical Durrant fight back.

Duzza was chasing a place in his first major final since joining the PDC but despite threatening a similar comeback to that which thwarted Vincent van der Voort on Friday, he was unable to get over the line.

The pair traded 180s with their first three darts before a 151 out-shot gave Durrant the early advantage. A nerveless Van den Bergh returned from the break invigorated, pushing his average beyond 102 and punishing missed darts at double from Durrant to turn a 3-2 first-interval deficit into a 6-4 advantage. 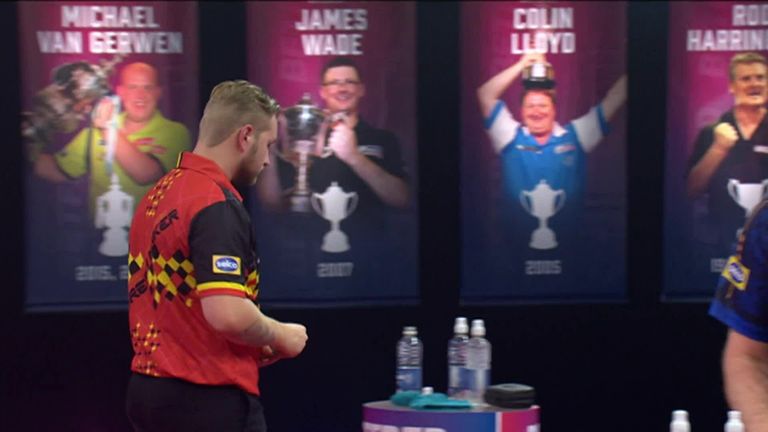 A typically-clinical 108 finish from Durrant only served to stir his Belgian opponent who responded with another three-leg burst to move 9-5 in front before Durrant fought back courtesy of 13-dart break.

Rather than fold, Van den Bergh was in position to take advantage of errant finishing from Durrant, reeling off three successive legs to lead 12-8 but Duzza, just like in his quarter-final against Van der Voort, refused to cower.

Trailing 13-10, Durrant did what is fast becoming known as 'doing a Durrant' and hauled himself back into the contest with four legs on the bounce, pinning double four for the lead for the first time since the fifth leg of the match.

There remained nothing between them until Durrant missed a dart at bull for 16-15, and Van den Bergh pinned double 14 for a break of throw at the most crucial of moments. And he consolidated at the perfect time to cross the finish line and seal his date with Anderson.

Darts is back on Sky Sports in August, as the Premier League returns with six consecutive nights of action getting underway on Tuesday August 25.