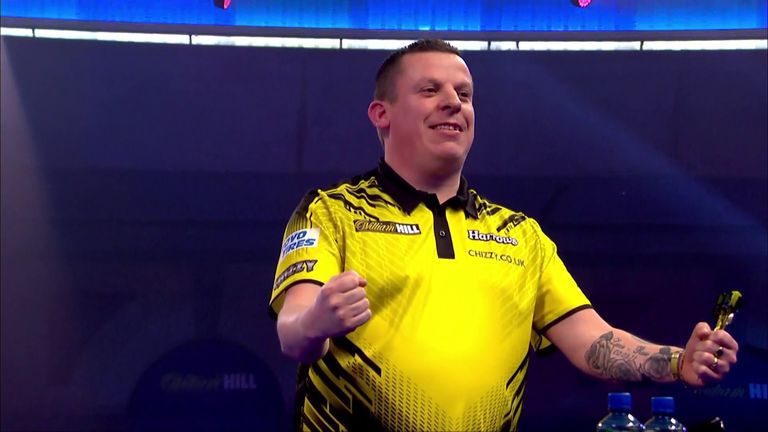 Dave Chisnall ended Michael van Gerwen's hopes of a fourth World Darts Championship title with a stunning 5-0 victory to reach the semi-finals at Alexandra Palace for the first time.

Chizzy, the world No 8, bullied the three-time champion throughout a remarkable display to end a 27-game winless run against Van Gerwen stretching back to February 2016 with a relentless display of scoring and finishing.

The man from St Helens had lost both of his previous World Championship quarter-finals, while MVG had won all seven of his, but it was Chisnall who won through in the fourth quarter-final of a dramatic day to set up a last-four showdown with Gary Anderson.

Chisnall has never won a televised major, losing in five finals - three of which have come against Van Gerwen - but the performance of the tournament so far gives him the chance of claiming the biggest prize in the game.

In the other semi-final, Gerwyn Price will face Stephen Bunting after the Welshman, who can take Van Gerwen's No 1 ranking if he lifts the Sid Waddell Trophy, edged out Daryl Gurney in the deciding leg of the deciding set.

Words can't express how happy I am to beat this man. Absolute gentleman to have this picture taken after the game. Onwards to the semi final tomorrow. Thanks for all the support. pic.twitter.com/a82ZuZYpDO

Van Gerwen and Chisnall had produced brilliant displays in high-class fourth-round matches, but Chizzy knew a dismal record against Van Gerwen was the barrier to a first World Championship semi-final. 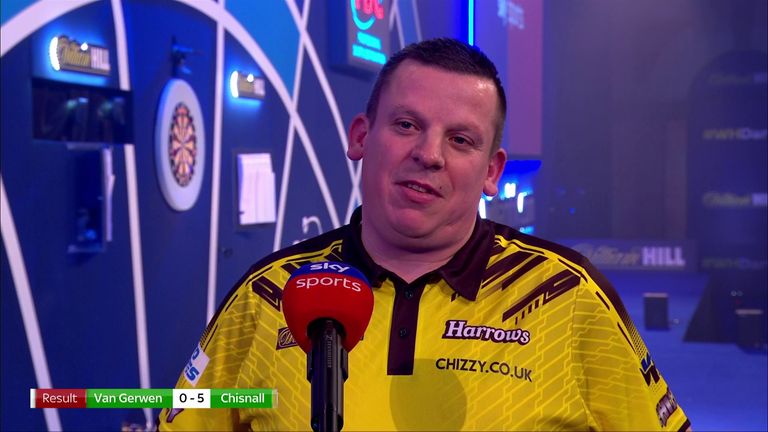 Chisnall had won just six of his 52 matches against MVG and not won on TV against the Dutchman since October 2013, but from the off he was a man inspired. Defying his record against the world No 1, Chisnall hit back from losing the opening leg to average 112, pile in four maximum 180s and hit all three darts at double to take the opening set.

After finishes of 46, 141 and 95 had given him the early advantage, Chizzy ploughed on, firing in another three maximums on his way to the second set. With MVG out of sorts, Chisnall could even afford to miss five darts for the set as the Dutchman fought back from 2-0 down to level, but when it mattered most it was Chizzy who pinned the required target. 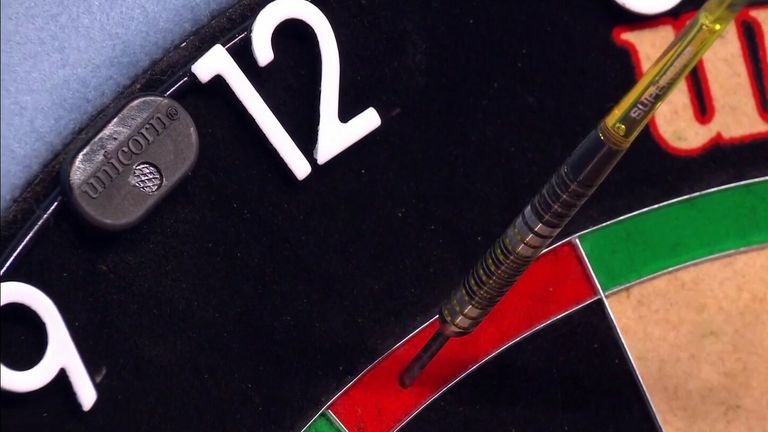 In the last 16, Van Gerwen trailed Joe Cullen by two sets, but his performance level there had been markedly better than what he had shown across the early exchanges, and he had no answer to Chisnall's brilliance.

Once again it was Chisnall bossing the occasion, racing into a 2-0 lead only to hand Van Gerwen a chance. The 'Green Machine' took out 150 after Chizzy had missed two for the set and when Van Gerwen punished another missed dart for the set to take the third the distance, it looked like the game was poised to turn.

However, Chisnall cleaned up 86 in two darts for a remarkable 3-0 lead, and followed up with 11- and 14-dart legs to open up yet another 2-0 lead in the set. Another dart for the set went begging as Van Gerwen kept himself alive, but it was Chisnall who moved to the brink of victory in an astonishing leg. 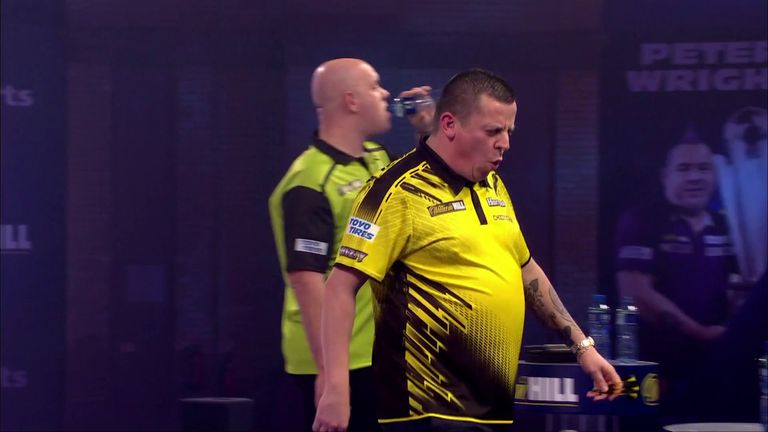 The 40-year produced eight perfect darts only to pull a dart at double 12 for the perfect leg, but he was back to mop up for a 4-0 lead. Van Gerwen had pulled himself back from the brink before but Chisnall was playing darts from another planet, taking out 130 to stand two legs away from the last four.

A 12-dart leg left him on the brink and then a clinical 80 finish took him across the finish line in style and gives Chisnall, the 2010 BDO World Championship runner-up, hope that he can finally end his hunt for a PDC major televised title.

🇳🇱Sad day for darts in the Netherlands today.

Chizzy’s win over MvG means that there will be no dutch player in the semifinals for the first time since 2012.#WHDarts #PDCWorldDartsChampionship

Price battles past Gurney in thriller 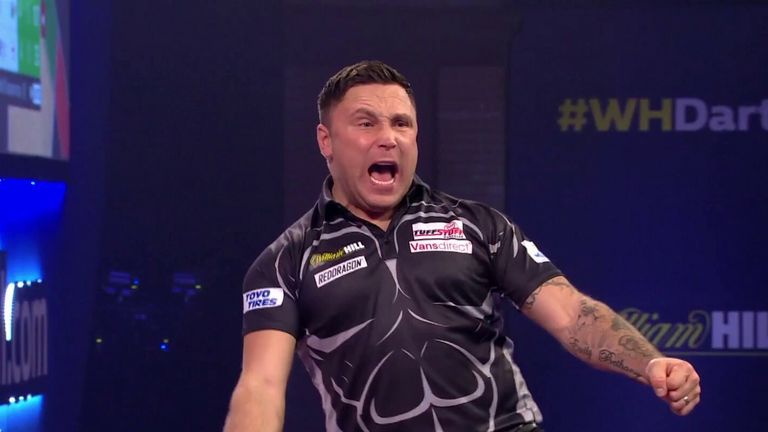 Price, the world No 3 who can take over from Van Gerwen as world No 1 if he wins the title on Sunday, was forced to dig deep having opened up 2-0 and 4-2 leads against the man from Derry.

However, Price pinned double top in a nervy last leg after Gurney failed to fashion a dart for the match to set up a date with former BDO world champion Bunting on Saturday night.

With very little resistance from Gurney, Price took out the first two sets. A 108 finish and a brilliant 13-dart leg sealing the early lead which he doubled when he reeled in the second set with three legs in succession. 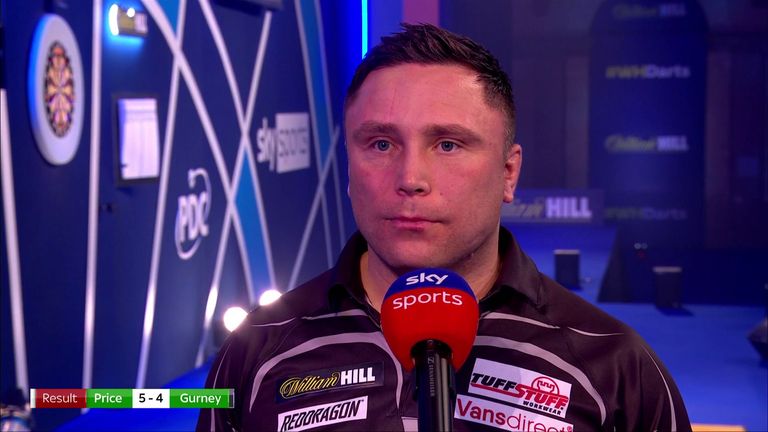 Having looked on as the Welshman claimed the early advantage, Gurney dug deep to haul himself back into the contest - and that was to become a theme. Upping the ante he fired in three 180s on his way to winning the third set against the darts.

A Price-like roar greeted Gurney's first set, and when he got the better of a high-class fourth set - pinning double eight after Price had missed three darts to level - the race to five had become a best-of-five contest locked at two sets apiece.

The Iceman showed all the skill and coolness under pressure that has taken him to three big TV titles this year to claim deciding legs in the fifth and sixth sets. Gurney had missed five darts for 2-2 in the fifth and was punished by a spectacular 143 finish and when Superchin missed a dart at tops to win the sixth set, the Iceman cleaned up 72 and was two sets clear again. But Gurney is a tough nut to crack and has a pair of major titles himself and once again claimed another set without dropping a leg to draw back within one. When he took his run to five legs in succession he was on the brink of a level contest, which he secured with a brilliant 12-dart leg.

And the decider followed the same pattern. Price taking the lead with a 107 finish, only to see Gurney respond with a 15th 180 of the match and another 12-dart leg.

The pair split the next two to force the tie to go the distance, where Price prevailed to reach the last four where he will aim to better a semi-final defeat to eventual champion Peter Wright last year.