"It's a pretty isolated environment if you're going to hold grudges, and there'll be no grudges held on my part if Gary wants to clear the air. If he doesn't, that's no problem." Watch Night 8 of Premier League Darts live on Sky Sports Action on Thursday from 7pm 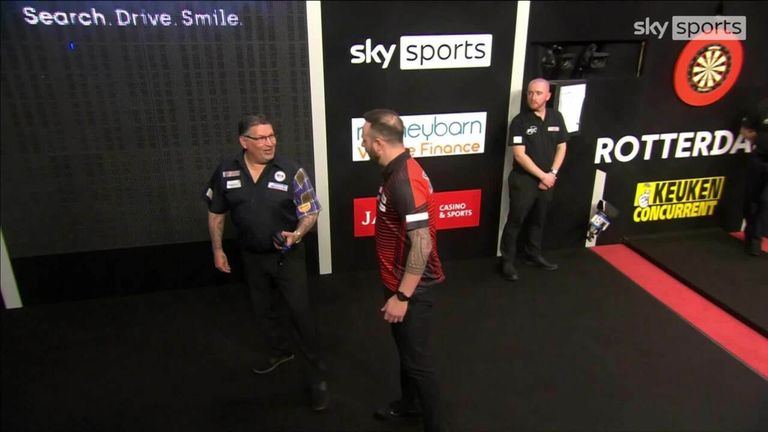 Joe Cullen says he has not spoken to Gary Anderson since their heated exchange in Rotterdam but would be happy to clear the air ahead of his bid for successive Premier League wins.

The pair were involved in an angry confrontation following their quarter-final on Night 7, which Cullen won 6-5 thanks to a 74 checkout after Anderson missed three match darts.

Asked if he had since spoken to Anderson, Cullen told Sky Sports: "No. I've not seen him. I'll leave it up to Gary. If he wants to speak to me I'll be happy to speak to him.

"It's just one of those things, especially with the Premier League boys. There's eight players, we see each other week-in week-out. I see some of these boys more than I do my own children.

"It's a pretty isolated environment if you're going to hold grudges, and there'll be no grudges held on my part if Gary wants to clear the air. If he doesn't, that's no problem." 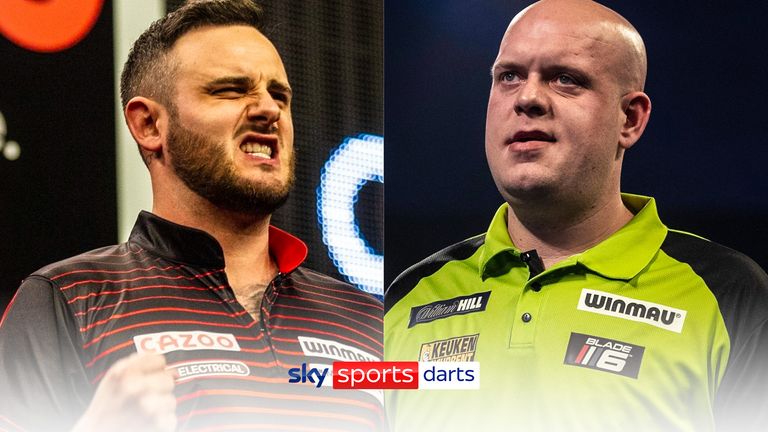 'The Rockstar' quickly put the spat with Anderson behind him as he defeated another two World Championship winners in Peter Wright and Michael van Gerwen to claim his first Premier League win.

"It may have overshadowed the night if I hadn't have won, but I went on to win it," he said. "It showed a bit of maturity that I didn't let it affect my game for the rest of the evening.

"It's one of those situations where maybe I'd be a little bit intimidated when you first start playing against the big guns. But I see myself in the upper tier of the elite at the minute.

"I think I dealt with it well, and obviously to win the night shows I did." After a frustrating start to his debut Premier League season, Cullen moved from bottom of the standings to fourth thanks to his Dutch triumph, averaging over 50 per cent on checkouts across the three matches.

Having won his first televised tournament in January when he triumphed at the Masters, Cullen is moving in the right direction. But the 32-year-old says there is still plenty of room for improvement.

"As far as form goes, I'm not over the moon with it, but I still seem to be grinding results," he said.

"I'm sure my form will come back sooner rather than later and I can win games and look good doing so."

Injured Price to play on

Cullen's quarter-final opponent in Birmingham on Thursday is Gerwyn Price, who confirmed he will compete despite fracturing a bone in his throwing hand.

The world No 2 was forced to withdraw from Night 5 in Brighton, where he was also due to face Cullen, but has since reached a Premier League semi-final and won a Players Championship in Germany last weekend.

"Gezzy is a fantastic player and a good professional as well, regardless of any sort of injury," said Cullen.

"I did an exhibition with him on Friday in Germany and spoke to him about it.

"I think it's more the fluid of his hand that's more difficult for him to deal with than the fracture itself. Your hands are swollen so there's not much touch or feel. He said he's been having some injections.

"I'll be preparing for the best Gezzy on the night. If he doesn't show up and I play well, then I can win. But either way it should be a great game."

Having become the seventh different winner in eight Premier League nights, Cullen heads to the Utilita Arena targeting back-to-back victories, which would give him extra cause for celebration ahead of next week's Premier League event in Leeds.

"I think that's the beauty of the format the PDC has put in place," he said. "You could get cut adrift at the start of the Premier League in the old format, where it's just one game per night.

"But you can see last week, I started the night at the bottom of the league, won the night, and the five points are more valuable than the £10,000 on the night. That rocketed me up to fourth.

"My confidence is high. It's more pleasing to win when not playing at your best, like I did last week. I thought my scoring was off but my finishing was on. If I can combine the two then there's no reason why I can't go back-to-back.

"I'm a proud Yorkshireman, and Yorkshire is a proud county in general. I'll be having a few of my friends and family there [in Leeds], and a strong, 10,000 Yorkshire crowd behind me.

"Hopefully if I can win on Thursday and then next week, to go back-to-back-to-back would be great."