World Cup of Darts 2021: Wayne Mardle previews this year's tournament and whether anyone can stop Wales

Watch all four days of action from Germany on Sky Sports, starting on Thursday at 6pm on Sky Sports Arena; Gerwyn Price and Jonny Clayton won Wales' first World Cup in 2020 and are favourites to retain their crown

The World Cup of Darts returns on Thursday and there are a host of talking points as Wayne Mardle ponders new-look teams, red-hot favourites and makes his standard predictions for the next four days.

Gone are the days when we were asking whether it was England or the Netherlands who would win, the MvG-Barney and Taylor-Lewis dominance has ended a few years ago now

It is a tournament that is evolving and changing but the winners of this event - like when Peter Wright and Gary Anderson won it, like when Gerwyn Price and Jonny Clayton won it - they are all great pairings, I don't believe that you can now win this tournament with someone dragging someone else along.

I don't think it has ever worked.

For England, James Wade hasn't played since 2010, and without being too harsh on Dave Chisnall, when he has played in the World Cup twice before he has underwhelmed a bit.

This tournament suits some players and not others, I say it every year but it is a rhythm ruiner which is why those - like Chizzy - who rely on it tend to underperform.

That said I can see them getting to the last four. James will plod on doing well, Chizzy is the unknown quantity because we don't know how he will play.

If Anderson was playing - you'd put your house on Scotland to meet Wales in the semi-final but now that is now a given. That is no disrespect to John Henderson, but Gary is a better player than John.

A bit like England, I expect them to go alright without actually winning.

As for the Netherlands, when Michael van Gerwen had Barney as a partner, all the pressure is not on Michael and since he has left I think Michael might be feeling that he can't slip up and that is maybe why he has underperformed some times.

He is playing with Dirk van Duijvenbode who has gone off the boil and I think that could be a problem. He has not played with anyone who has been playing well [Danny Noppert, Jermaine Wattimena].

Michael hasn't been able to relax since Barney left and I don't see it being any different this year.

Let's put it this way, Wales won it last year and Clayton is a better player this year and Price is now the world champion.

They are the reigning champions, they are the bookmakers' favourites and crucially, I think it's now the fourth time they've played together - they are a constant and I think that's important because there seems to be chopping and changing across the other teams.

There is no weakness in the pairing at all and, in truth, I cannot see another pairing coping with them - I think they'll win it.

Forget the pairs, it becomes about singles and I think whoever Jonny might beat, it's not an upset and that's certainly not the case with Price either. I could see them both going unbeaten because not only are they are great pairing they are both now so used to winning.

If Australia were to go on and win it, it would be the right time, it would be amazing after the sad news about Kyle Anderson.

I think their team of Simon Whitlock and Damon Heta are now a better team than last year, they are both playing better and much better equipped - and I hope they can hold things in, especially Damon who did a really heartfelt interview.

Kyle will be remembered this week, and he'll be mentioned probably more than some of the players and rightfully so and this Australia team are more than capable.

There are possible upsets along the way, there are a couple of pairings that will go completely under the radar. Firstly, now bear with me, as I bigged these up from the studio last year and I was right, even though they lost. 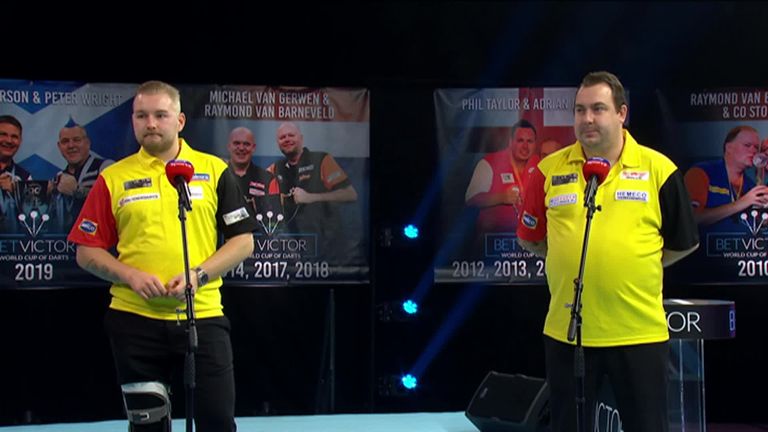 The Czech Republic team of Karel Sedlacek and Adam Gawlas have got something to offer, they too are way better than they were last year especially Gawlas who was fantastic in Hungary at the weekend.

For Poland, Krzysztof Ratajski and Krzysztof Kcuik play Sedlacek and Gawlas in the first round - whoever wins that match I am assuming they will play Scotland - and Scotland are going to have to watch out.

Throughout the history of the Germany team, Max Hopp has more or less been the best player - but now Gabriel Clemens is way better than Hopp - the dynamics in all of these teams are charging.

Because of that, I would make Jeff Smith and Matt Campbell for Canada favourites over the seeded Germans who are playing at home.

Whoever wins this, I think they'll be quite finely matched players - and to that end I fancy Northern Ireland to have a run because there is not a weak one between Brendan Dolan and Daryl Gurney.

I really like that pairing, and I think they will play England in the semi-final from the top half.

Dolan is playing better than he has ever done, and Gurney is without doubt improved from where he was even a few months ago - they'll be feeling good about themselves.

England could win it, but I don't think they will, Chizzy has not been ripping things up but neither has Wadey and I think Northern Ireland come through.

Germany and Canada could be the fly in the ointment, either could make the semi-final.

In the bottom half, no big shocks I am going for Wales against the Netherlands - I just think Dirk on form is a better player than John Henderson from the other major seeds and I also think Michael van Gerwen is going to take this more serious than he has maybe taken the World Cup before - and he has won it!

I think it's huge for him, he needs to win because he needs to win something going into a spate of big events. He needs to cross the line again because edgy times could be coming. He may not have Barney but he does have someone capable, who at the moment is slightly out of form.

That said, I think Wales are too strong for the Netherlands and as I have said and explained I think they are too good and there's no weakness and they beat Northern Ireland in the final.

Darts is back on your Sky Sports screens in September when the World Cup of Darts takes place in Germany, all four days of action will be live - coverage begins on Thursday September 9