Racing Pride: "This landmark partnership between Aston Martin Cognizant Formula One Team and Racing Pride will have a widely felt positive impact for the LGBTQ+ community"; Racing Pride logos to feature on Aston Martin's car at the French GP later this month 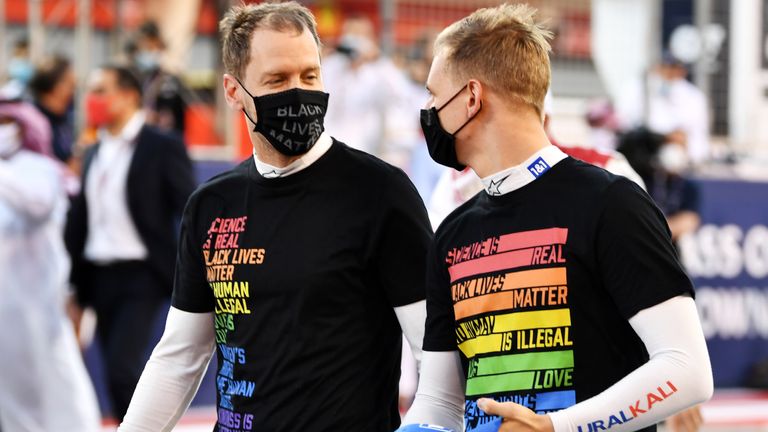 Aston Martin have announced a partnership with Racing Pride and will hold a series of social and community initiatives to raise awareness of LGBTQ+ diversity and inclusion.

Announced at the start of June's Pride Month, the month-long campaign will see the team highlight the strength of the LGBTQ+ community within motorsport, while Racing Pride logos will feature on the bodywork of Aston Martin's car at the French Grand Prix.

Richard Morris, Racing Pride's co-founder, said: "This landmark partnership between Aston Martin Cognizant Formula One Team and Racing Pride will have a widely felt positive impact for the LGBTQ+ community.

"We look forward to continuing to work closely with the team as it constantly strives to create an inclusive culture in which all team members are respected, empowered, and valued.

This Pride Month, together with @Cognizant, we are dedicated to celebrating the LGBTQ+ community.

As we embark on this journey, we are proud to announce our partnership with @RacingPrideHQ.

Join us as we continue to build our open, diverse and inclusive team. 💚#WeRaceAsOne

"The commitment of Aston Martin Cognizant Formula One Team to be a leader in creating true equality - which this partnership represents - will be a source of inspiration to the LGBTQ+ community within the sport, among its global fanbase, and in broader society.

The team's drivers, Sebastian Vettel and Lance Stroll, have also welcomed the partnership.

"I want to help highlight the positivity around the message of inclusion and acceptance," said Vettel, the four-time F1 champion.

"I congratulate the people who have pushed the discussion that has led to wider inclusion; but, equally, I'm aware that more needs to be done to change attitudes and remove much of the remaining negativity.

"It is great to see Aston Martin Cognizant Formula One team giving this issue support - there is a long road ahead, but I'm really pleased we can play a positive role."

Stroll added: "As a racing driver and a public figure, I'm passionate about building inclusion within the motorsport world.

"I'm already involved in helping to develop a STEM programme with Cognizant for young engineering students, but this initiative is a way we can be pro-active as a team in breaking down barriers and fostering positivity.

"It's also a great way for us to support Formula 1's wider #WeRaceAsOne initiative, and I'm pleased that our team has found its own unique way to add its support to a very credible programme that's been taken up by teams up and down the pit-lane."

Sky Sports is a member of TeamPride which supports Stonewall's Rainbow Laces campaign. Your story of being LGBT+ or an active ally could help to make sport everyone's game. To discuss further, please contact us here.