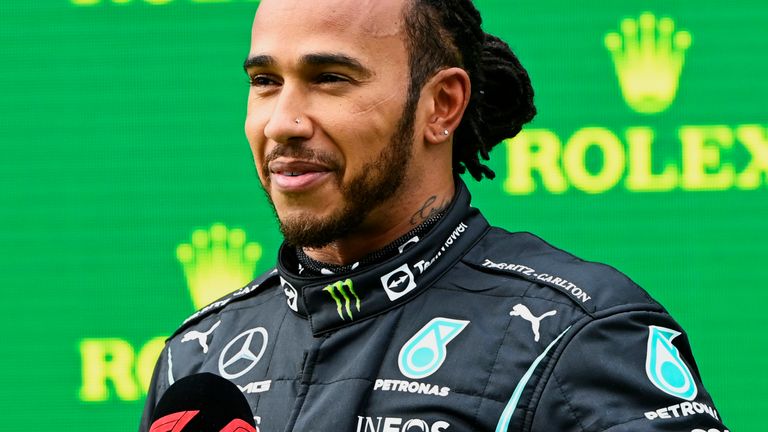 In a fascinating exclusive interview, Lewis Hamilton says he now has a "new drive", a "real purpose" and a "mission in life" thanks to his push for diversity and inclusion - which he believes has made him "stronger than ever" while also prolonging his record-breaking Formula 1 career.

Hamilton sat down with Sky Sports F1's Rachel Brookes ahead of the United States GP to discuss, during Black History Month, a wide range of topics, from his 2021 battle against Max Verstappen, to the fight against racism and the need for "action" in F1 and beyond...

'Things haven't been fixed... we've got to fix it': Hamilton on 'sparking conversations' with messages on the grid

Hamilton has been a leading voice in the fight against racism and inequality, consistently championing change off the track, setting up his own commission, while also using his platform to spread important messages and shine the spotlight on Black talent. Notably this year, Hamilton paid for young Black designers to attend the 2021 Met Gala while more recently, he revealed he had teamed up with the award-winning George the Poet to display messages on his t-shirts on the grid...

"It was just before the beginning of the season and I was thinking, we've gone through a period, Black Lives Matter, taking a knee, what's the next step and how do we continue to spark conversation?" said Hamilton.

"And so I came up with this idea - how about working with some up-and-coming Black designers to create the shirts, and then work with a young Black British poet and come up with something meaningful, and by the end of the year we'll have a real story to tell.

"And that's what it's about, it's about a story and sparking that conversation.

"Because we go from one race to another, and people are talking less perhaps about Black Lives Matter and inclusivity. But we've got to keep that at the tip of people's tongues because that's still a conversation that needs to be had.

"Things haven't been fixed; we've got to fix it. It's all well and good the sport talking about end racism, about diversity and inclusion, sustainability and all these things, but we've got to make sure we're actually following through with these things. That takes lots of conversation. I feel like we've got to take our audience on that too, because we can all keep learning."

'I'm really proud of the next generation'

Hamilton isn't the only driver who has used his voice to push for change, with Sebastian Vettel one of many drivers who have raised important issues this season.

"I don't mind being the one to break them, and yeah it's great to see Seb really coming out on his own. As two of the older drivers I hope that does encourage some of the younger drivers.

"I'm speaking with Mick [Schumacher], whose such a lovely lad and he's saying things like, 'I don't know everything, is there any way you can educate me?' And same with Lando [Norris]. So I'm really proud of this next generation coming along, but we can still encourage them to be more invested and more understanding.

"When you're young, all you're thinking about is winning - you don't have time for a lot of these other things. Well, you think you don't, but you actually do. And that's what we've got to get across."

Energised by new 'drive' and 'mission'

Locked in a title battle with a driver who is 12 years his junior and who is looking for his first F1 title, Hamilton has a lot more experience than Verstappen to draw on. But he maintains that what has been more helpful to his championship push is the work off the track and the desire to highlight messages - such as his Breonna Taylor t-shirt last year.

It's like my new drive and I feel like it's giving me more longevity because it's a lot of work we have to do. I feel like it also gives my life real purpose. Racing is not a purpose, it's something you do.

"So now it's the work that I'm doing in the background and then I'm turning up and I'm enjoying this job.

"Is it helping me race? I think so, yeah. It's like my new drive and I feel like it's giving me more longevity because it's a lot of work we have to do. I feel like it also gives my life real purpose. Racing is not a purpose, it's something you do."

"Naturally I've definitely had moments… people don't see but it's not all beautiful. I'm only human and it's all relative. You have up and down days, I have really difficult days where I don't want to train, you don't want to continue to push, all these different thoughts that people have I experience those too.

"There's been definitely been times where I'm like, I don't know if I can keep going, or maybe there's something else I want to do. But I don't think I'd found my purpose until last year.

"Now I feel like I have a mission in life and it's not about just winning championships and races, that's all cool, but actually being able to make an impact to help youngsters coming through.

"My niece and nephew will be having conversations at school about engineering and might want to take triple science, and might want to be mixed-race kids that are can be an engineer either here or at NASA, wherever. I love that."

'Mentally, I'm stronger than ever'

He says it also makes him a tougher competitor on the track.

The goal when leaving F1

"What will make me proud is when I leave this paddock, to really see this journey of taking action, seeing more women here, seeing more people of colour here, seeing it more reflective of the outside world and see it continue to progress.

"I was really. really shocked and it was really emotional for me because most often you're the only person of colour in the room and you always wonder why."

The 'rollercoaster ride' of the 2021 season

Hamilton also discussed his 2021 title battle against Verstappen, who he now trails by 12 points with five races remaining. Hamilton admitted that it's not always been "perfect" but that he continues to learn and is proud of his team.

"I expected it was going to be a rollercoaster ride. It's been amazing, it's been the hardest year on so many levels, but there's been so many positives and I have really, really enjoyed it, even the difficult days.

"It definitely could be better in the sense that we've dropped points, we've not always been perfect, but you live and you learn and I feel like things happen the way they happen for a reason and we've learnt a lot, we've pulled together after all these experiences we've had, win or lose, and I love the place I am in with my team.

"Particularly the things we're doing off-track together, I've always been proud of my team an what we've achieved together [on the track], but this push that we've started on diversity and inclusion, kind of being that pebble that creates an effect that hopefully others follow in the industry has been something I'm so proud to be a part of."

Hamilton sparked debate last month when suggesting that Verstappen had more "pressure" on his shoulders this year because it was his first championship fight. But he says now that Verstappen is definitely better prepared when he was back when winning his first title in 2008.

"I don't spend a moment thinking what might or what might not be a distraction for him, that doesn't bother me either way. If I do my job to the best of my abilities, I don't have a problem. That's how I approach my job.

"My first title? It was horrendous. The journey was terrible, but he's what, six years in? I was in my second year.