Leclerc crushed Sebastian Vettel and Lewis Hamilton with a lap time of 1:42.519, seven-tenths of a second faster than the multi world champions.

"I definitely did not expect to be ahead by that much,"said Leclerc. "But definitely happy with my lap."

Vettel complained that his final Q3 laps were a "mess" but, crucially, he did manage to beat Hamilton to second place by 0.015s to seal Ferrari's first front-row lockout since round two of the season in Bahrain.

The Italian team have so far enjoyed a perfect weekend on F1's return, flourishing on Spa's long straights, and are looking for their first victory of 2019 on Sunday.

Hamilton, whose Mercedes car was repaired following his big shunt in final practice, admitted he just could not match Ferrari and was happy to even be in the hunt. 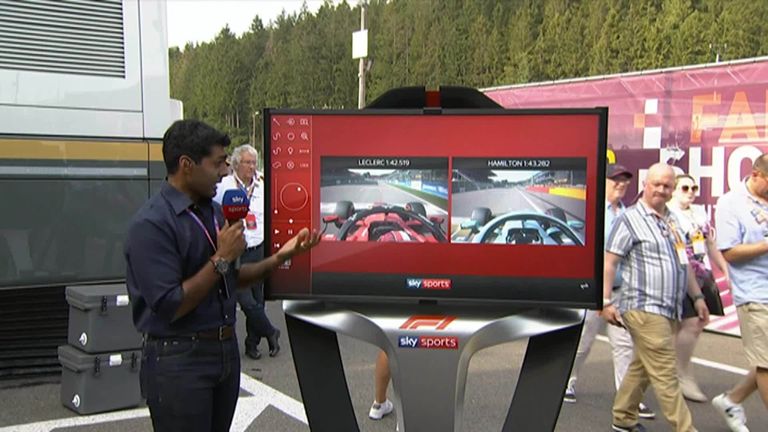 "Considering I missed most of P3 and a lot of P1, I'm really grateful to be up here," said the championship leader.

"Ferrari have done a great job today, Charles did an exceptional job, and I hope we can take the fight to them tomorrow."

Valtteri Bottas was fourth, a tenth behind Hamilton, while Max Verstappen and Red Bull were never in contention - the Dutchman finished 1.1s off the pace at a track Red Bull did not expect to suit them.

His new team-mate Alex Albon will start at the back of the grid due to an engine change and bowed out in Q2.

The Renaults were impressively sixth and seventh, though both Daniel Ricciardo and Nico Hulkenberg will take five-place grid drops due to engine penalties of their own.

That will certainly benefit Kimi Raikkonen, Sergio Perez and Kevin Magnussen, who completed the top 10 on Saturday. Leclerc's super Spa Saturday
Leclerc is enjoying a fine run of form in F1 2019 - on a Saturday at least - as he has now out-qualified his team-mate Vettel at the last six races.

"It obviously feels amazing," said the young Monegasque driver after his stonking lap.

"It felt good - the first sector wasn't quite what we wanted, but after that we were very strong. We need to work on our race pace a bit, but I think we should be fast tomorrow."

With Vettel unable to hook up a great lap in Q3, it was a masterclass just as Ferrari needed it at Spa. The next two races, in Belgium and at home in Monza, feature long straights and should favour the team's high-powered package.

"Charles did a better job today," admitted Vettel. "The car felt quite good, which is the most important thing."

Mercedes are by no means giving up the fight for Sunday, with Hamilton and Bottas both confident they can reel in the Scuderia, whose engine has been less of a factor in races.

"I'm happy that we have a fight," stated Hamilton. Red Bull, though pessimistic ahead of qualifying, may be slightly downhearted when looking at their gap to the front, while McLaren, one of the big positives from F1 2019, also endured a disappointing day.

Lando Norris was their lead car in 12th, while Carlos Sainz was knocked out in Q1 after Antonio Giovinazzi's Alfa Romeo failure towards the end of that segment.

Both Toro Rossos, Daniil Kvyat and new team-mate Pierre Gasly, were also unlucky to be eliminated from a session which started with Robert Kubica's Williams going up in smoke after another Mercedes engine failure.

Several engine penalties will be applied on Sunday - for Albon, Lance Stroll, Kvyat, the Renaults - and Giovinazzi and Kubica may add to that list.

Don't miss out when the season resumes at the Belgian GP this weekend on Sky Sports F1. Find out more here to subscribe