On what would have been the weekend of F1's return to Montreal for the 2020 Canadian GP, we take a look back to the extraordinary events of last year's race – and the big controversy that followed 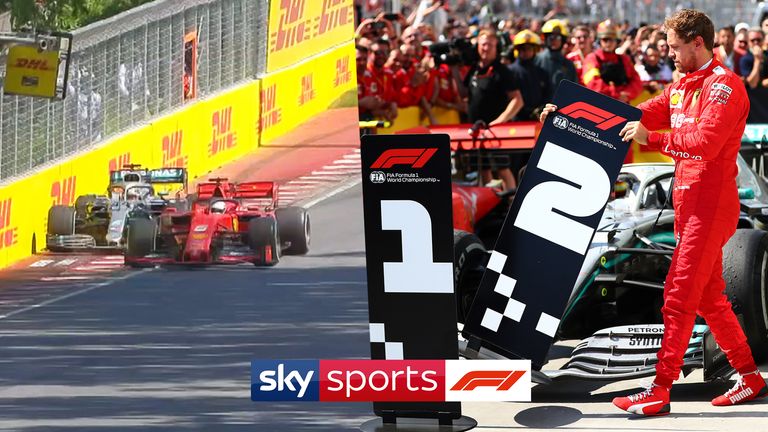 What was the story before the race?

The Canadian GP was only the seventh round of the 2019 season but it was already clear Mercedes were well on their way to a sixth successive world championship double.

Despite not always having the fastest car - particularly on circuit's with long straights such as Bahrain and Baku - the relentless reigning champions had won the campaign's first six races. In fact, they had finished first and second in every one of them apart from the most-recent one in Monaco - when they had to settle for just another victory and a third place.

Fresh from back-to-back wins in Spain and Monte Carlo, Lewis Hamilton led team-mate Valtteri Bottas in the standings. Sebastian Vettel was third, but already more than the points equivalent of two race wins behind great rival Hamilton. As while Ferrrari's 2019 car was proving to be dynamite in a straight line, it did not have the downforce or all-round balance of the Mercedes W10.

Vettel's problems did not stop there. 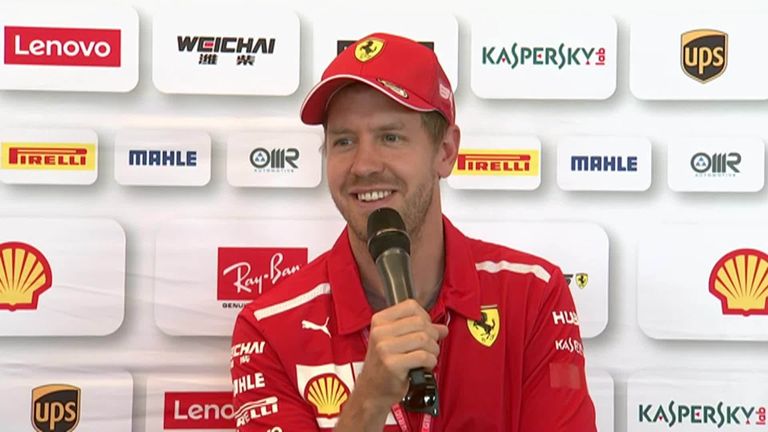 The four-time champion arrived in Montreal amid speculation about his future in the sport, with the German having to bat away suggestions in the pre-event news conference he was seriously contemplating retirement.

He had not won for 14 races, and although at that point in the season he led Charles Leclerc by a handy 25 points in the standings, his new young team-mate had shown more than a few flashes that he was capable of taking on Ferrari's hitherto undisputed number one.

The good news for both Vettel and Leclerc was that the layout of the Circuit Gilles Villeneuve, which features fast straights punctured by chicanes, was expected to suit Ferrari's low-drag SF90 car.

Leclerc was fastest on Friday, before Vettel took over on Saturday morning and then the first part of qualifying. But Hamilton had often been the man to beat in Montreal and he rallied in Q2 to take top stop - although there was barely a tenth in it between Mercedes and Ferrari.

Still, Vettel needed something something to end his pole lap - and via a brilliant final lap, he got it. A 1:10.240, a new track record, and pole position from Hamilton by two tenths of a second.

It was vintage Vettel - but Hamilton would still be starting alongside him on the front row. 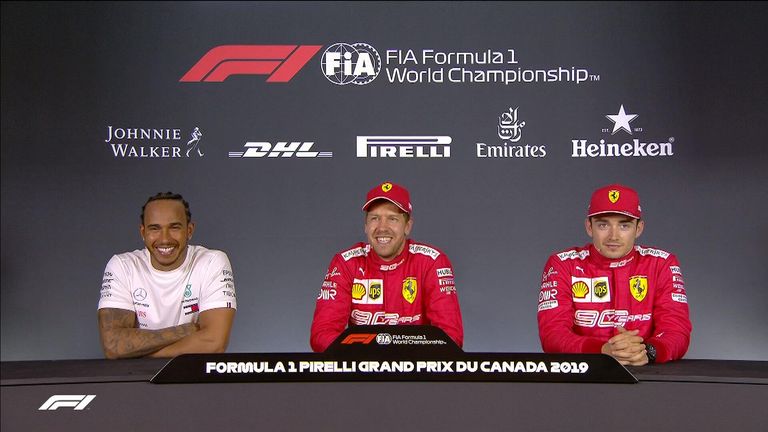 Vettel vs Hamilton and that penalty

At the start on the Sunday, Vettel comfortably converted pole into the race lead held a small, but steady lead over Hamilton all the way to his first pit stop on lap 26.

Hamilton stayed out two laps longer and, although the Mercedes had slipped five seconds off the lead by the time it had returned, the world champion looked to be happier at the start of the second stint on hard tyres and by lap 39 was within DRS range of Vettel. 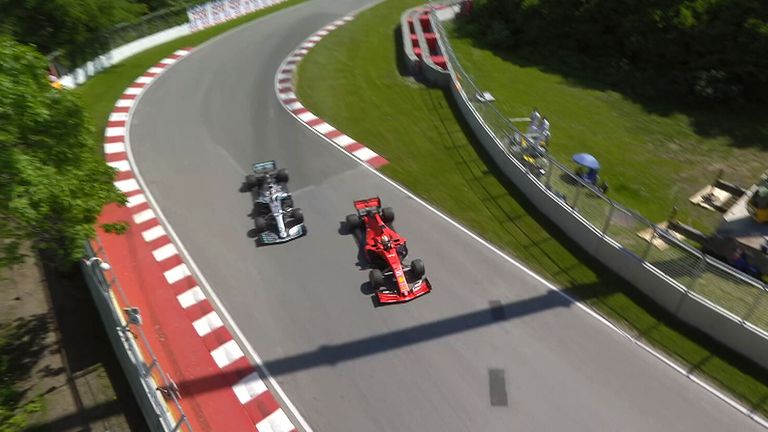 Being chased down as they exited the first chicane, Vettel lost the back end of his Ferrari into Turn Three and slithered straight across the grass.

He rejoined the track at the exit of the chicane, just as Hamilton was coming round the right-left turn. The Ferrari took its line, the Mercedes had to back off on the outside, and they came close to touching.

"He just came on the track so dangerously," said Hamilton over team radio.

But what would the stewards make of it? We found out as Vettel approached the end of his 57th lap.

Unsafe re-entry and forcing another driver off the track.

Having actually reopened his gap to Hamilton after the incident some nine lap before, Vettel was leading Hamilton by 2.5 seconds when the ruling dropped from the stewards. 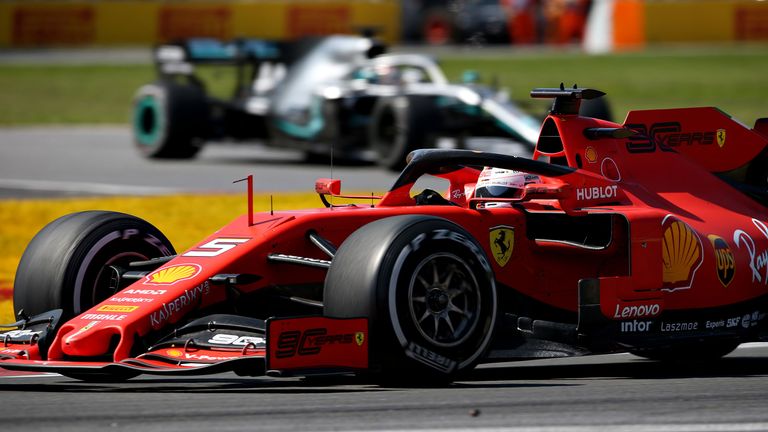 "I had nowhere to go. Seriously, I had nowhere to go!" argued Vettel over the radio to his race engineer, before adding in more robust fashion a few laps later: "Where the hell am I supposed to go? I had grass in my wheels. They are stealing the race from us."

He was told by his engineer to keep his head down and race hard to the finish, but doubling his lead to over 5s was always going to be a tough ask with so few laps to go.

Vettel duly passed the finishing line in first place when the chequered flag was shown at the end of lap 70. But he was immediately relegated in the live classification to second when Hamilton took the flag just 1.342s behind him.

Lewis Hamilton, for a record-equalling seventh time in Montreal, was therefore the race winner, with Vettel now a very-frustrated runner-up.

The four-time champion was not happy. 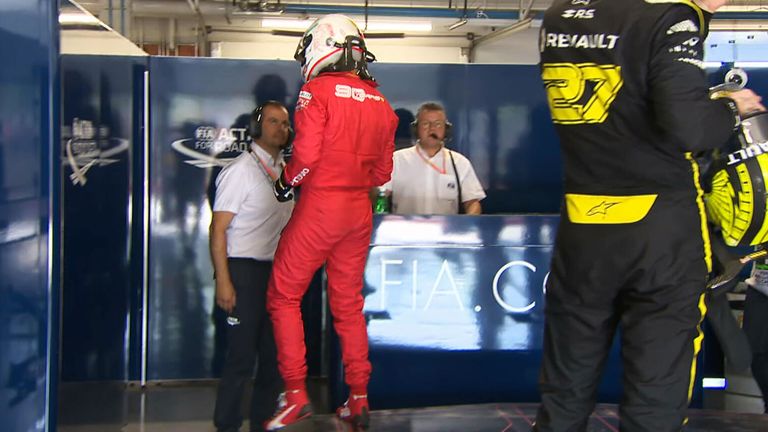 What happened after the race?

On his slow-down lap back to the pits, Vettel argued over the radio: "No, no, no! Seriously, you need to be an absolute blind man to think that you can go through the grass and then control your car. I was lucky that I didn't hit the wall. Where the hell am I supposed to go? This is the wrong world, I tell you."

Where the German was supposed to go next was the parc ferme holding area for the top-three cars, yet he parked up his Ferrari before getting there. He went to the FIA garage to be weighed as is the norm but, instead of returning to the pit lane for the post-race interviews, he walked straight out the back of the garage and into the paddock. Where to? The Ferrari motorhome.

With the interviews conducted by Martin Brundle now underway with Hamilton and the third-placed Leclerc, the question now on everyone's minds was whether Vettel would be coming back for the podium ceremony.

The answer, ultimately, was yes - but that did not mean the drama was over. 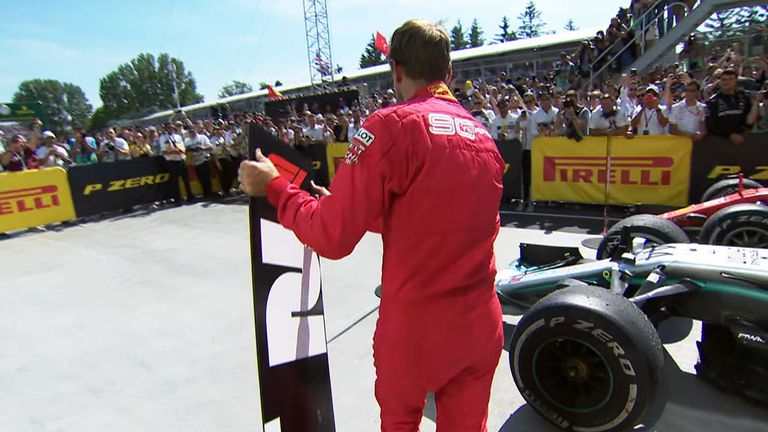 Vettel returned to the pit lane - via the Mercedes garage, of all places - and headed towards back towards parc ferme accompanied by plenty of cheers from the large Montreal crowd, which features a loyal Ferrari following.

But just as he reached the door to head towards the podium he stopped - and looked right. The arrangement of the marker boards for the three podium-finishing cars had caught his eye. He briskly walked over, picked up the #2 board from in front of where his car should have been parked and switched it over with the #1 that it was in front of Hamilton's Mercedes.

It was pure sporting theatre.

Vettel did ultimately join the podium ceremony, where Brundle caught up with him to gather his frustrated thoughts. They had not changed - Sebastian felt he had been unfairly denied the victory. 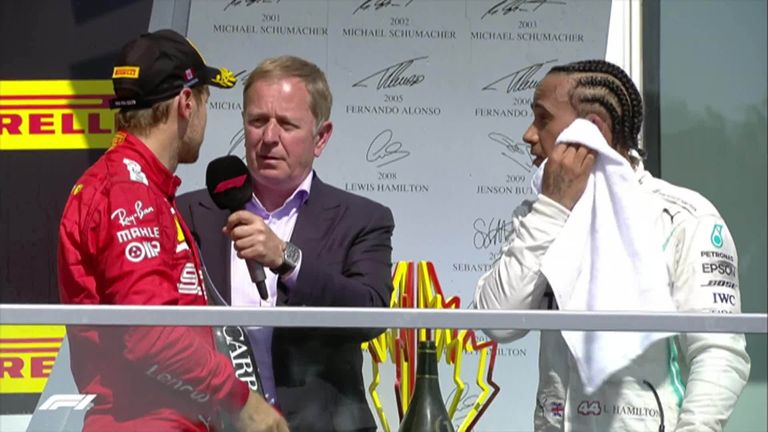 Yet he still put that anger aide to classily step in and ask the crowd not to boo Hamilton, who he said had done nothing wrong.

In the post-race press conference that soon followed, a calmer Vettel took umbrage with the nature of the sport's modern-day rule book and wistfully admitted: "I was just thinking that I really love my racing. I'm a purist, I love going back and looking at the old times, the old cars, the old drivers. It's an honour when you have the chance to meet them and talk to them; they're heroes in a way. So I really love that but I just wish I was maybe as good, doing what I do, but being in their time rather than today." 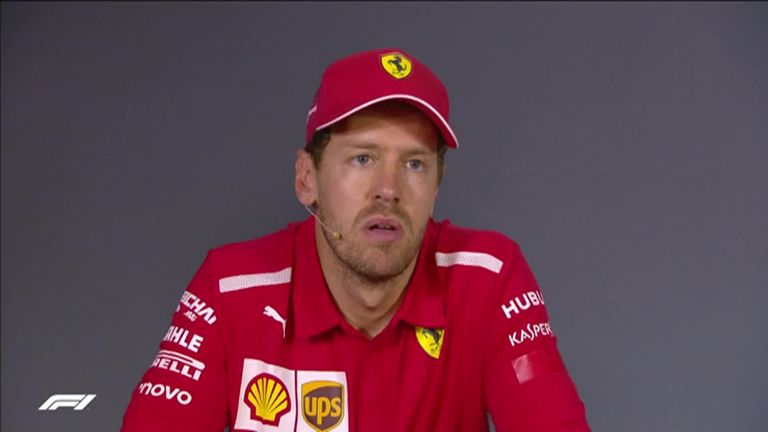 Why the controversy was not over yet

With Vettel adamant there had been an injustice, and Ferrari backing their driver, it quickly became clear into Sunday evening the Scuderia were going to pursue some kind of challenge to the result.

In fact, the controversy rumbled on for a full two weeks until the next race in France - when Ferrari requested a 'Right of Review' with the stewards over the incident.

Required to bring forward 'new evidence' that was not available to the stewards at the time of the incident, Ferrari sporting director Laurent Mekies suggested before a pre-hearing they had "overwhelming evidence" to overturn the decision.

Ferrari had submitted several examples of what they felt was fresh material, including SkyPad analysis of the incident by Karun Chandhok which aired in Sky F1's post-race show in Canada. But the stewards did not see it that way, throwing the case out and stating there were "no significant and relevant new elements which were unavailable to the parties at the time of the competition". 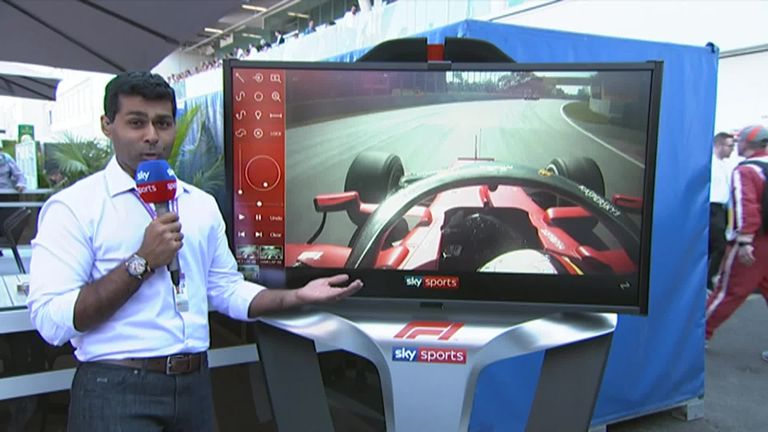 The case was now firmly closed and so Hamilton's win stood.

"It is what it is," remarked Vettel. "As I said, there are too many paragraphs [in the regulations]. What can you change, how can you change? Just burn the papers."

It set the tone for a difficult Paul Ricard weekend - and summer - for Vettel.

Car balance problems contributed to him qualifying only seventh and he then finished just fifth in the race, two places behind Leclerc.

Leclerc went on to outqualify Vettel an eye-catching nine times in a row - including four poles in succession after the summer break - and turned what was a deficit to his team-mate of 28 points after Canada into an advantage of his one. One which Vettel could not overhaul by the end of the season, despite finally winning again in Singapore and rediscovering some stronger form for the closing flyaway rounds.

So was Vettel's post-Canada summer slump sheer coincidence? Speaking recently after Vettel's Ferrari exit at the end of this 2020 season was announced, Sky F1's Ted Kravitz said he believed the events of Montreal had been "a proper junction" for the German driver.

"Neither Ferrari driver had won a race in 2019 at that point - Leclerc being unfortunate not to do so in Bahrain - and so it was hugely frustrating for Vettel how Montreal played out with the time penalty from the stewards and a lost victory," said Kravitz.

"Seb's head went down after Canada - with Formula 1 as much as with Ferrari.

"Then when Leclerc went on his run of pole positions and then his wins in Spa and Monza during the summer, I think Vettel had realised he was number two in the team. It wasn't the team he joined in as far as his it being his team to support him for the championship."

Twelve months on and we now know Vettel and Ferrari's journey together now just has months left to run. Of all the many highs and lows of Vettel's time in red, Canada 2019 will always go down as one the most dramatic.